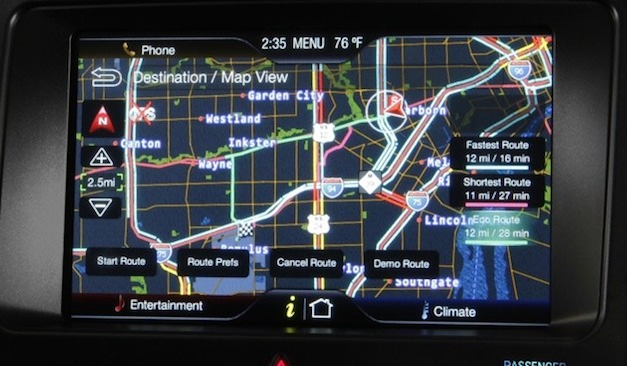 FoMoCo has announced a new technology for its new MyFord Touch driver connect system that provides a range of real-time feedback information on fuel-efficiency performance that helps drivers optimize their miles per gallon from their vehicles.

“We have learned that when we provide drivers the information and tools in an interactive and entertaining way, they want to drive more fuel efficiently,” said Jim Buczkowski, director of Global Electrical and Electronics Systems Engineering. “MyFord Touch provides an unprecedented level of information and interaction so drivers can make the choice to be more fuel efficient.”

Furthermore, MyFord Touch’s map-based navigation system gets a new Eco-Route option that calculates the most fuel efficient route a driver can take to get from A to B. As Ford points out, Eco-Route is not necessarily the fastest or shortest route but is the most fuel-efficient.

Check out a video of the Eco-Route features after the jump.

The system compliments findings by the U.S. Energy Information Administration reports that if every driver practiced eco-driving techniques, which can result in an EPA-estimated 15 percent benefit in fuel economy, more than 22 billion gallons of gas would be saved. The U.S. currently uses about 150 billion gallons of gasoline annually.

Hit the jump for the press release for more information.

– New MyFord Touch™ driver connect technology provides an array of real-time feedback on fuel efficiency performance that helps coach drivers to optimize their miles per gallon
– MyFord Touch map-based navigation offers an Eco-Route option, which instantly calculates the most fuel-efficient route for the driver. Ford testing shows Eco-Route can help achieve fuel economy gains of up to 15 percent
– MyFord Touch launches this summer on the 2011 Ford Edge and will be available globally on the 2012 Ford Focus. MyLincoln Touch will be standard equipment on new Lincoln vehicles beginning with the 2011 Lincoln MKX

DEARBORN, Mich., April 15, 2010 ““ When it comes to achieving the best possible fuel mileage the way you drive can be nearly as important as the vehicle you drive.

Ford”s advanced new in-vehicle system ““ MyFord Touch™ ““ offers an array of real-time information on fuel economy performance that can coach drivers to get more miles to the gallon and save on fuel costs. In addition, MyFord Touch”s map-based navigation system offers an Eco-Route option that quickly calculates the most fuel efficient route a driver can take to get from A to B.

MyFord Touch is the latest innovation from Ford to help drivers optimize fuel economy. It builds on the fuel efficiency “coaching” concept Ford pioneered on its SmartGauge™ with EcoGuide cluster for the 2010 Ford Fusion Hybrid and Mercury Milan Hybrid as well as the all-new 2011 Lincoln MKZ Hybrid. The system provides real-time fuel economy data and promotes fuel-efficient driving by showing a graphic of growing leaves and flowers.

When a driver provides a destination to the navigation system, MyFord Touch accesses historical and real-time traffic data as well as posted speed information to calculate three navigation options: Fastest, Shortest and Eco-Route.

Eco-Route is not necessarily the fastest or shortest route but is the most fuel efficient. Typically, it charts a course that avoids congested freeways while maximizing the use of major roads where the driver can maintain an efficient rate of speed. When Ford of Europe engineers tested the feature, they achieved up to a 15 percent improvement in fuel economy using the Eco-Route.

In addition to its Eco-Route feature, MyFord Touch enables drivers to monitor and track their vehicle”s real-time fuel economy performance and mile-per-gallon averages for the past five, 10 and 30 minutes in the form of a bar chart next to the fuel gauge on the display. Drivers can customize the amount of information provided to meet their needs and hone their eco-driving skills over time.

“MyFord Touch not only gives drivers information they can use to improve their driving habits, but also expands on that capability by engaging the navigation system to give drivers a variety of options,” Brace-Mezigian said. “The benefits will be greater because MyFord Touch and MyLincoln Touch will be widely available in the future.”

Eco-driving techniques tested by Ford showed that motorists coached in eco-driving can significantly improve the fuel economy performance of their vehicles. Here are simple tips that any driver can use:

1. Slow down and watch speed ““ Drive 55 mph instead of 65 to save fuel. EPA estimates a 10 to 15 percent improvement in fuel economy by following this tip. Also, aim for a constant speed. Pumping the accelerator sends more fuel into the engine. Using cruise control whenever possible on the highway helps maintain speed and conserve fuel.

2. Accelerate and brake smoothly ““ Accelerating smoothly from a stop and braking softly conserves fuel. Fast starts, weaving in and out of traffic and hard braking wastes fuel and wears out some of the vehicle components, such as brakes and tires, more quickly. Maintain a safe distance between vehicles and anticipate traffic conditions to allow for more time to brake and accelerate gradually.

3. No idling ““ Today”s engines don”t need a warm-up. Start the car immediately and gently drive away. Don”t leave your car idling. Prolonged idling increases emissions and wastes fuel. Turn the engine off in non-traffic situations, such as at bank and fast food drive-up windows, when idling more than 30 seconds.

5. Be kind to your vehicle ““ Maintain proper engine tune-up to keep vehicles running efficiently. Keep the wheels aligned. Wheels that are fighting each other wastes fuel. Replace air filters as recommended. Use a fuel with good detergent additives to keep the vehicle engine clean and performing efficiently. Always consult the owner”s manual for proper maintenance.

6. Travel light ““ Avoid piling a lot of luggage on the roof rack. The added frontal area reduces aerodynamics and will hurt fuel economy, reducing it by as much as 5 percent. Remove excess weight from the vehicle. Unnecessary weight, such as unneeded items in the trunk, makes the engine work harder and consumes more fuel.

9. Choose the right oil ““ Use good-quality oils with the viscosity grade recommended in the owner”s guide. Ford recommends SAE 5W-20 oil for most cars and trucks to provide the best fuel economy. Only oils “certified for gasoline engines” by the American Petroleum Institute with the starburst symbol should be used.

10. Consolidate trips ““ Plan ahead to consolidate your trips. This will enable you to bypass congested routes and lead to less idling.

For additional information on how to save on gas, visit the Driving Skills for Life Web site and click on the “eco-driving” module. Ford”s eco-driving initiative builds on the Alliance of Automobile Manufacturers” comprehensive nationwide effort to promote eco-driving at www.EcoDrivingUSA.com.

Report: BMW planning to launch app for music on demand

August 25, 2011 Omar Rana Comments Off on Report: BMW planning to launch app for music on demand

January 9, 2012 Omar Rana Comments Off on Ford’s Detroit display to take you in the clouds for a cinema experience