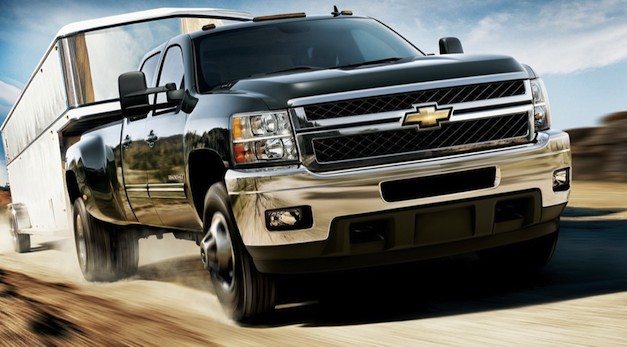 Last month when General Motors unveiled the new 2011 Chevrolet Silverado Heavy-Duty pickup we learned that the lineup will consist of two engine options including a Vortec 6.0L gas V8 mated to a strengthened version of the Hydra-Matic 6L90 6-speed automatic transmission and the new 6.6L Duramax diesel mated to a new Allison 1000 6-speed automatic.

Today GM announced the technical specs on both variants with the 6.6L Duramax diesel being the big story. The 6.6L Duramax turbo-diesel V8 engine makes a total of 397-hp at 3,000 rpm and a peak torque of 765 lb-ft at 1,600 rpm. The 11 percent jump in fuel efficiency, combined with a new 36-gallon fuel tank, provides up to 680 miles of highway driving between fill-ups. In the Silverado HD chassis and box-delete models the 6.6L Duramax is rated it 335-hp and 685 lb-ft of torque.

Oh, and before we move on, we’d like to point out that those are best-in-class diesel torque and horsepower figures.

“Segment-leading power is great, but it”s not the only thing that makes the new Duramax a winner,” said Gary Arvan, Duramax chief engineer. “We designed the engine to make that power with less fuel and fewer emissions, while also increasing its durability.”

A slightly different version of the 6.6L Duramax is offered in Silverado HD chassis and box-delete models. It is based on the same improved architecture and includes most of the same features as the pickup version, but is engineered to meet federal certification standards for incomplete vehicles, including the incorporation of a robust EGR system. It is rated at 335 horsepower (249 kW) at 3,100 rpm and 685 lb.-ft. of torque (928 Nm) at 1,600 rpm.

Among the 2011 6.6L Duramax turbo diesel”s new and enhanced features are:

The more powerful 6.6L Duramax is also more fuel-efficient ““ up to 11-percent greater highway fuel economy than the outgoing model ““ reduces NOx emissions by up to 63 percent and helps enable greater towing ratings. Silverado 3500HD equipped with a fifth wheel hitch can tow up to 20,000 pounds (9,072 kg). The increased fuel efficiency, combined with a new, 36-gallon (136 L) fuel tank, provides up to 680 miles (1,090 km) of highway driving between fill-ups.

With nearly 1.3 million Duramax diesel engines put into operation since its launch in 2000, no other automaker has as much diesel engine development experience for meeting the demands of the heavy-duty truck customer.

Approximately 90 percent of the Vortec 6.0L”s peak torque is available by only 2,000 rpm and excellent fuel economy is enabled by the engine”s low-friction OHV configuration and cam phasing. The state-of-the-art small-block architecture of the Vortec 6.0L ““ known commonly as the “LS” family ““ delivers great strength, smoothness and durability.

Whether equipped with the 6.6L Duramax or the small-block 6.0L, all 2011 Silverado models work under the best warranty coverage in America ““ a five-year/100,000-mile limited powertrain warranty, plus roadside assistance, courtesy transportation and other features that provide assurance that Chevrolet backs its trucks for everything the road offers.