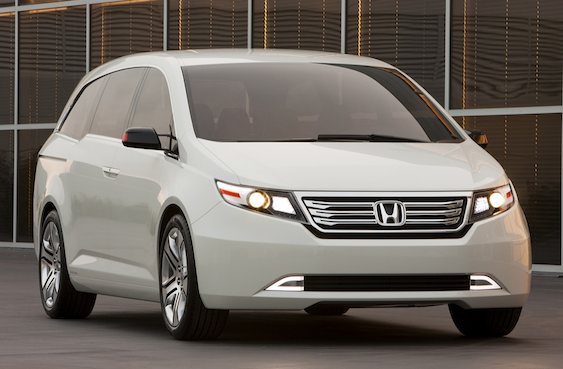 Honda today gave us the first look at the next-generation of its award-winning Odyssey minivan with the new Honda Odyssey Concept, which is on display at the 2010 Chicago Auto Show.

Unlike previous Odyssey models, the new Odyssey Concept shows that the next-generation version will offer a more aggressive take on minivans with a wider stance and a slightly lower roofline.

“The Odyssey established its reputation by providing families with what they most want in a minivan – great functionality, an emphasis on safety and good fuel economy,” said Vicki Poponi, assistant vice president of American Honda product planning. “Odyssey then further delighted customers with its surprisingly engaging, fun-to-drive and dynamic nature. The next-generation Odyssey promises to take these strengths to a higher level while adding more style and personality.”

Honda said that enhanced aerodynamics and advanced powertrain technologies will contribute to the next-generation Odyssey’s increased fuel efficiency. Ready to make its debut in the fall, the 2011 Honda Odyssey is expected to achieve an EPA-estimated fuel-economy of 19/28 mpg (city/highway) on select models.

02/10/2010 – CHICAGO – The Honda Odyssey Concept, on display at the Chicago Auto Show, introduces a sleek and distinctive exterior styling direction for the next generation of the industry’s best-selling minivan, set to debut this fall, American Honda Motor Co., Inc., announced today.

The Odyssey Concept dramatically departs from conventional minivan styling with its low and wide stance, highlighted by a “lightning-bolt” beltline that further distinguishes the vehicle’s profile. Compared to the current Odyssey, the Concept’s slightly lower roofline (-1.0 inch) and wider stance (+1.4 inch) contribute to a sleeker, stronger and more dynamic presence with improved aerodynamics that help increase fuel economy. Forthcoming improvements to the production Odyssey’s interior are designed to further enhance the current model’s accommodating space for people and cargo.

Currently in its third generation, the Odyssey’s unique array of features, including its superior driving dynamics, 3rd-Row Magic Seat® and efficient i-VTEC™ V-6 engine with three-mode Variable Cylinder Management™ (available) all combine to offer a sophisticated environment with room for up to eight people (seven on Odyssey LX). The Odyssey has been America’s best-selling minivan since 20082 and is produced exclusively in Alabama by Honda Manufacturing of Alabama (using domestic and globally sourced parts). Both the concept and production vehicles, along with all development activity for the 2011 Odyssey, are being designed at Honda R&D Americas in Torrance, California, and Raymond, Ohio.

The Odyssey has won numerous awards and critical acclaim. Recent accolades include the Edmunds.com 2010 “Top Recommended” minivan award, U.S. News and World Report 2010 “Best Minivan for the Money” award, Automotive Lease Guide 2010 “Best Minivan for the Money,” the Kelley Blue Book award as one of the ten “Best New Family Vehicles of 2009” and “2009 Best Resale Value Award” in the van category, which recognizes vehicles that are expected to have segment-leading resale value after five years of ownership.