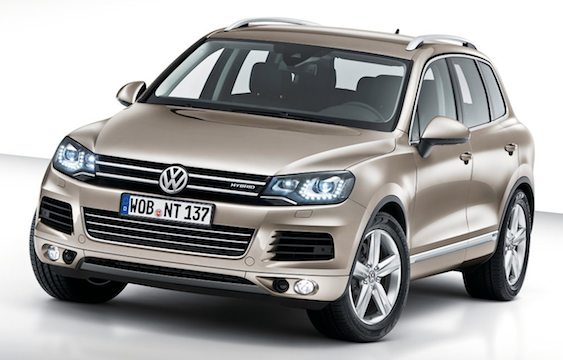 Ever since the Touareg SUV was produced by Volkswagen it has only received one facelift, which debuted in North America as a 2008 model. Since then, Volkswagen has left the Touareg virtually untouched – at least to the public eye. Behind closed doors, however, Volkswagen was planning the redesigned 2011 Touareg you see here and a hybrid version that will be the first and only off-roader in Europe by a German automaker to be available as hybrid.

We’ll have more details on the U.S.-spec version of the 2011 Touareg later this spring. Prices will be announced closer to launch.

To the Point: World Premiere:

New Touareg takes the SUV idea into the future

Wolfsburg/Munich, 10 February 2010 – Volkswagen is unveiling the completely redeveloped Touareg as a world premiere. It is the most technically innovative “VW” since the brand has been in existence. This Touareg is reinterpreting the fascinating multipurpose SUV idea in a contemporary way ““ thanks to a range of engines that are nearly 20 percent more fuel efficient and a large variety of new assistance and safety systems. The Touareg will also be the first and only off-roader in Europe by a German car maker to be available in a hybrid version too. It sets standards among fully off-road capable SUVs with petrol engines that have a fuel consumption value of just 8.2 litres fuel per 100 kilometres. The Touareg Hybrid can be driven up to 50 km/h in purely electric mode – emissions-free. Among the diesel engines, the Touareg V6 TDI with 7.4 litre combined fuel consumption now posts the best value in the segment of genuine SUVs. Both versions, the Touareg Hybrid and V6 TDI, are the most fuel efficient petrol and diesel SUVs ever built in Europe in this large vehicle class.

As has already been accomplished on the globally successful, smaller Tiguan, Volkswagen is systematically striving for sustainability on the new Touareg too. The first precondition was met: The SUV was lightened by 208 kilograms in the base version! A quantum leap. Yet, the body has five percent greater torsional rigidity, which makes it the leader in its competitive class. A second precondition was met as well: Designers attained a significantly improved Cd value. Along with aerodynamic refinement efforts, another factor at work here is that this Touareg is built lower to the ground than the previous model. Together with front end styling based on the new Volkswagen design DNA, this results in a smaller frontal area. The third precondition: All engines, now offered with a standard 8-speed automatic transmission ““ a first in this market segment ““ demonstrate significant fuel economy advantages over the previous model; in some cases the advantage is far greater than two litres per 100 kilometres.

SUV for all trails ““ All-wheel drive in two versions

Also modified in pursuit of reduced fuel consumption was the standard all-wheel drive. In the base version (“4Motion”), all new generation Touaregs have all-wheel drive with Torsen limited-slip differential (4MOTION; climbing ability: 31 degrees). Like the Tiguan Track & Field, the Touareg also has an “Off-road driving programme”, which – at the press of a button – tunes the ABS, EDS and ASR for off-road duty, activates Hill Descent Assist and adjusts the automatic gearshift points.

Instead of a Torsen differential, the V6 TDI can be ordered with an optional “Terrain Tech Packet” that has an even more rugged transfer case designed for off-road duty. It includes reduction gearing and centre and rear differentials, each with up to 100 percent locking (4XMOTION; climbing ability: 45 degrees). Similar to the first Touareg generation, this version also has a rotary switch the driver now uses to adapt the car to specific duty conditions over five levels: 1. “On-Road”; 2. “Off-Road” (like “Off-road driving programme” plus automatic control of the mechanical locks); 3. Low (like “Off-road” plus activation of reduced gearing, higher shift points, no automatic upshift in manual mode); 4. Addition of centre differential lock; 5. Addition of rear differential lock. Equipped like this, the Touareg can conquer any terrain on Earth.

Volkswagen has not only made the new Touareg lighter, more fuel efficient and an agile performer; it has also made it into an even more versatile, all-round vehicle. The new interior was made more functional, the seats more comfortable and leg room in the rear is larger. Now the rear bench seat has 160 millimetres in longitudinal adjustment, and the backrest angle can be adjusted. Electrically unlatched at the press of a button as an option, it folds down in seconds and frees up 1,642 litres of cargo space. Already standard equipment in the base version is a radio-CD and info system, which is intuitively controlled over a 6.5-inch touch-screen.

The parking brake is now activated by pushbutton. The engine (V6 versions) automatically shuts off at traffic lights and restarts as soon as the driver releases the brake pedal (Stop-Start system). As an option, the tailgate can be opened and closed by a RF remote control unit integrated in the car key. The largest panoramic sunroof of all SUVs provides for light even on overcast days. The innovative “Area View” utilises four cameras to detect the Touareg”s surroundings and this enhances safety. Also offering protection are up to nine airbags. Lane Assist ensures that the vehicle does not stray from the right path; meanwhile, Side Assist warns of vehicles approaching from the rear when changing lanes. Adaptive Cruise Control (ACC) with integrated Front Assist can brake to a stop in an emergency and tension the seatbelts as a precautionary measure. Bi-Xenon headlights with Dynamic Light Assist perceive oncoming traffic and adjust the light beam to eliminate unwanted glare, and adaptive roll compensation ensures that the Touareg sits solidly on the street. For the first time, there will be special features on the new Touareg under the new “Exclusive” badge from Volkswagen Individual. Options that can be ordered include 19-inch alloy wheels (“Girona” type), fine wood inserts (“Olive Ash”) and a leather interior (“Nappa”) in the two-colour combinations “Dark Burgundy / Titan Black” or “Pepper Beige / Titan Black”.

Touareg ““ the best of two worlds

About 500,000 car drivers chose to buy the first generation of the SUV. It is a luxury sport utility vehicle that offers a high level of comfort, sporty driving properties, avant-garde styling, excellent quality and unlimited expedition capabilities ““ essentially the best of the passenger car and off-road worlds unified in one concept. This is now being followed up by the new Touareg ““ a high-end and versatile all-round vehicle that brings these two worlds together even more perfectly. The Touareg will already be available at dealers in April.

May 20, 2010 Omar Rana Comments Off on 2011 Ford Flex Titanium model commands a premium