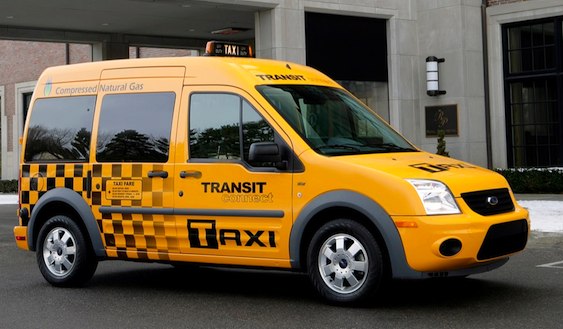 In early 2005, FoMoCo was the first automaker to introduce gas-electric hybrid powered taxis in North American fleets with the Ford Escape Hybrid in San Francisco and New York City. Continuing with its fuel-efficient taxi success, FoMoCo announced today that it will start producing the new 2011 Ford Transit Connect Taxi, which will arrive in dealerships later this year.

Other than already efficient 2.0L 4-cylinder gasoline engine, Ford said that it will also offer engine prep packages on all Transit Connect models (base and taxi) allowing conversion to clean-burning natural gas (CNG) or propane (LPG). Ford says that besides offering ample space for taxi riders, the Transit Connect’s 135 cubic feet of cargo space is perfect to accommodate a compressed gas tank.

As for an integrated payment processing and passenger information technology, FoMoCo will be teaming up with Creative Mobile Technologies (CMT). Ford and CMT are also working to extend the offering of Ford Work Solutions with a suite of productivity tools for business owners including a wireless in-dash computer with full high-speed Internet access and navigation.

Hit the jump for the press release for more info along with the high-res image gallery.

CHICAGO, Feb. 9, 2010 ““ The Ford Transit Connect Taxi will go into production and arrive in dealerships later this year as a 2011 model, adding to Ford Motor Company”s leadership in the North American taxi market.

Making the announcement today at the Chicago Auto Show, Ford also said it will introduce engine prep packages on all Transit Connect models ““ base and taxi ““ allowing conversion to efficient, clean-burning compressed natural gas (CNG) or propane (LPG, or liquefied petroleum gas). Both CNG and LPG are popular among taxi operators because of their low cost of ownership.

The roomy, flexible interior of the Transit Connect ““ the 2010 North American Truck of the Year ““ is perfectly suited for taxi service and conversion to CNG and LPG. The vehicle”s 135 cubic feet of cargo space accommodates a compressed gas tank while leaving ample passenger legroom and cargo capacity.

“While meeting with taxi operators in cities throughout the U.S., we found considerable interest for vehicles that run on alternative fuels,” said Mark Fields, Ford”s president of The Americas. “The Transit Connect Taxi, combined with an engine modified by Ford to use CNG/LPG, is designed to meet that need. This marks a new era in “˜green” transit.”

To further serve taxi operators, Ford will provide required calibration specifications for the CNG or LPG conversion. By properly following Ford”s specifications, the conversion can be completed without voiding the engine”s warranty.

“Compressed natural gas and propane offer more than sufficient power for vehicles because they are high-energy fuels,” said Rob Stevens, Transit Connect chief engineer. “Another natural benefit for these fuels is they provide an overall lower emission of greenhouse gases compared to gasoline. Additionally, operating on CNG or LPG provides the operators lower fuel/operating costs for their fleet.”

Furthermore, nearly 87 percent of natural gas used in the United States is domestically produced. There also are government tax credit incentives for fleets to convert to alternative fuels.

Since October 2009, CNG prep packages have been available on E-Series vans with 5.4-liter and 6.8-liter gas engines.

A conversion-ready interior
The Transit Connect Taxi offers an outstanding interior package for people and cargo. With its open architecture, the taxi provides excellent interior headroom and passenger visibility. The vehicle”s rear seat has been moved back three inches to maximize passenger comfort. Plus, with 6.5 inches of ground clearance, passengers step easily through the dual sliding doors. Additional climate control ventilation has been added for rear seat passengers.

The Transit Connect Taxi also features a wiring upfit package with a hole in the roof for signage, vinyl front and rear seats, rubber rear floor, sliding second-row windows and standard third-row windows ““ all of which are factory installed. Additional installation of technology and other taxi modifications such as roof signage and the optional seating partition are handled by taxi upfitters in local markets.

Ford and CMT also are developing strategies for potential integration of Ford Work Solutions, a suite of productivity technologies for business owners providing a wireless in-dash computer with full high-speed Internet access and navigation. “Ford has demonstrated a significant commitment to support the taxi industry with not only a dedicated product but also with the commitment to work with the technology companies that support the industry,” said Jason Poliner, chief operating officer, CMT. “Ford understands that the taxi business is not just the vehicle but a complete technological solution.”

Evidence of how this technology could work in the future is included in the Transit Connect Taxi. It also features an 8.4-inch electronic infotainment and navigation screen that shows cab fare, news, weather, sports scores and stock ticker. With the touch screen, passengers also can select their choice of programming, follow the taxi”s journey on a map, or scroll through a list of points of interest along the route ““ including restaurants, museums and shops.

Once at the destination, the screen displays the fare with options to pay via cash, credit or debit. Cardholders can swipe their card, select a pre-calculated tip recommendation or utilize the touch screen to enter a tip amount, and complete the transaction right from their seat.

Building on taxi leadership
The “green” taxi isn”t new at Ford, which has been a leader in the taxi business for decades. Ford was the first manufacturer to introduce gas-electric hybrid-powered taxis into North American fleets with the launch of the Ford Escape Hybrid in San Francisco and New York City in early 2005.

Built on a dedicated commercial vehicle platform and tested to Ford tough truck standards, the Transit Connect Taxi ““ including gasoline-powered versions and those modified to operate on CNG/LPG ““ is designed to meet the extreme demands of taxi service.

With its standard 2.0-liter, four-cylinder engine and automatic transmission, the conventionally powered Transit Connect is expected to deliver an estimated 30 percent improvement in fuel economy over many of today”s traditional taxis.

Ford will export the 2011 Edge to China 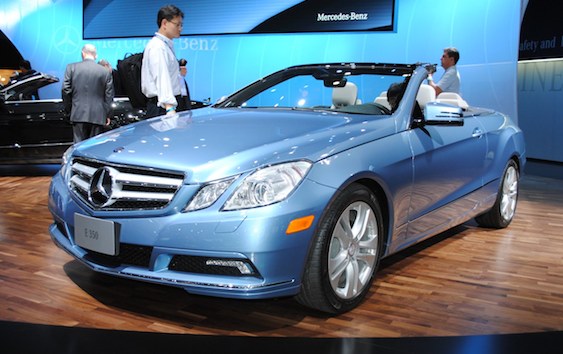