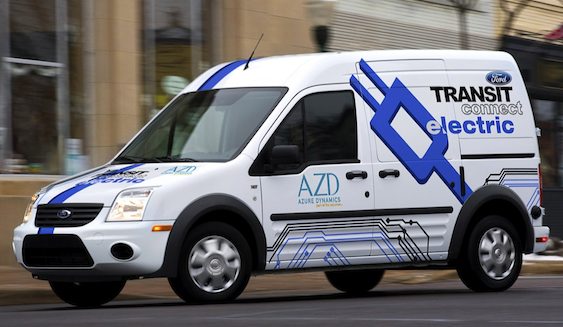 At the 2010 Chicago Auto Show later this week, FoMoCo will show the new 2011 Ford Transit Connect Electric commercial van, the first in a series of electric-vehicles from the Dearborn automaker. With the help of Azure Dynamics’ Force Drive battery electric powertrain and Johnson Controls-Saft”s advanced lithium-ion battery technology, the 2011 Ford Transit Connect Electric will go into production in late 2010.

Following the Transit Connect Electric, Ford plans on bringing three more electric-vehicles to market by 2012. The first will be the Ford Focus Electric in 2011, followed by a plug-in hybrid electric vehicle in 2012 and a next-generation hybrid in 2012.

“¢ Transit Connect Electric is the first product in Ford”s accelerated electrified vehicle plan, and will be followed by the Focus Electric in 2011, a plug-in hybrid electric vehicle in 2012 and next-generation hybrid technology in 2012

“¢ The all-electric, zero-emission Transit Connect Electric has targeted range of up to 80 miles per full charge, and will be rechargeable using either 240-volt or standard 120-volt outlets

CHICAGO, Feb. 9, 2010 ““ Ford Motor Company today unveiled the all-electric version of the Ford Transit Connect ““ the 2010 North American Truck of the Year ““ at the Chicago Auto Show and confirmed the zero-emissions small van will be in fleet operators” hands later this year.

The 2011 Transit Connect Electric will use a Force Drive electric powertrain manufactured and integrated by specialty upfitter Azure Dynamics.

“Transit Connect Electric exemplifies how we are leveraging our relationships as well as our hybrid and advanced powertrain programs to bring energy-efficient technologies from the laboratory to the street,” said Derrick Kuzak, Ford group vice president, Global Product Development. “Not only is this an ideal vehicle for eco-conscious fleet operators, it is an important part of Ford”s future.”

In addition to the Transit Connect Electric, Ford plans to bring three more electrified vehicles to market by 2012 ““ the Focus Electric in 2011, a plug-in hybrid electric vehicle in 2012 and a next-generation hybrid in 2012.

Getting charged up and moving
Transit Connect Electric is well-suited for commercial fleets that travel predictable, short-range routes with frequent stop-and-go driving in urban and suburban environments and a central location for daily recharging. The vehicle, which will accelerate at a similar rate as the gas-powered Transit Connect and will have a top speed of 75 mph, has a targeted range of up to 80 miles on a full charge.

Owners will have the option of recharging the Transit Connect Electric with either a standard 120V outlet or preferably a 240V charge station installed at the user”s base of operations for optimal recharging in six to eight hours. A transportable cord that works with both types of outlets will be available for recharging at both kinds of locations.

The vehicle”s charge port is located above the passenger-side rear wheel well. The onboard liquid-cooled 28-kilowatt-hour lithium-ion battery pack is charged by connecting the charge port. Inside the vehicle, an onboard charger converts the AC power from the electric grid to DC power to charge the battery pack.

“We”re excited about the potential for our electrified vehicles,” said Praveen Cherian, program manager for the Transit Connect Electric, who added that today”s electric vehicle buyers are similar to early adopters of hybrid vehicles. “People were a little hesitant about hybrids at first, but now they accept it and embrace it. We expect the same will be true of electric vehicles.”

Driving on electric power
When the vehicle is operating, battery power is provided to the drive motor through the electric powertrain”s motor controller. The motor controller uses throttle input from the driver to convert DC power supplied by the battery into three precisely timed signals used to drive the motor.

The onboard DC/DC converter allows the vehicle”s main battery pack to charge the onboard 12V battery, which powers the vehicle”s various accessories, such as headlights, power steering and coolant pumps.

In the Transit Connect Electric, the battery pack has been efficiently integrated without compromising interior passenger room and cargo space. The battery pack is expected to last the life of the vehicle.

Collaborations are key
Transit Connect Electric builds on the existing business relationship between Ford and Azure Dynamics, as well as their shared experience with battery supplier, Johnson Controls-Saft.

“There is an increasing interest in electrified vehicles, and we are committed to bringing these vehicles to the marketplace,” said Nancy Gioia, Ford director of Global Electrification. “Ford”s work with Azure and Johnson Controls-Saft to create a purely electric Transit Connect will allow us to offer fleet customers an additional option for eco-friendly transportation.”

Oak Park, Mich.-based Azure Dynamics develops hybrid electric and electric drive technology for shuttle buses and commercial trucks, such as the Balance™ Hybrid Electric, which is built on the Ford E-450 cutaway and strip chassis for the medium-duty commercial vehicle segment.

“The opportunity to work with Ford on the Transit Connect Electric is a breakthrough advancement for us at Azure and for the light-commercial vehicle market,” said Scott Harrison, Azure Dynamics CEO. “For us, it”s an important evolution of our existing relationship with Ford. From an industry standpoint, we are seeing delivery fleet and utility vehicle operators move to smaller, more fuel-efficient vehicles.”

Azure Dynamics” proprietary Force Drive battery electric powertrain will be the driving force in the Transit Connect Electric. Force Drive components have previously been deployed in more than 40 vehicle integrations and have more than 25 million miles of on-the-road experience.

An ideal platform
With a unique combination of car-like driving dynamics, cargo capacity, accessibility and low purchase and operation costs, the Transit Connect is an ideal choice for electrification.

The Transit Connect Electric is expected to offer lower cost of operation, because recharging with electricity is generally less expensive than refueling with gasoline. Users may also benefit from much lower maintenance costs over the life of the vehicle. Consider the following:

“¢ The number of components typical in an internal combustion engine and transmission are dramatically reduced in an electric vehicle to just a few moving parts in the electric motor and transaxle, which results in much fewer parts to wear out or maintain
“¢ Electric powertrains operate with solid state electronics, which have demonstrated low or no maintenance over the life of the product
“¢ Electric vehicles have completely sealed cooling systems that do not require refilling, replacement or flushing
“¢ Electric vehicles require no oil changes or tune-ups
“¢ There are no belts to wear out or break and no spark plugs or injectors to clean or adjust
“¢ There is no exhaust system to replace and no liquid fuel system to freeze or clog
“¢ The use of regenerative braking reduces wear and tear on brake pads
Common strengths
Although there are significant differences between the Transit Connect Electric and its gas-powered twin, there are many things in common as well. Both models offer:
“¢ 135 cubic feet of cargo volume with 59.1 inches of floor-to-ceiling load height and
47.8 inches of load width between the wheel arches
“¢ Load length a generous 72.6 inches, or more than six feet of cargo floor space
“¢ Split rear cargo doors that open at a standard 180 degrees, or an optionally available
255 degrees
“¢ Lift-over height less than two feet when the vehicle is unloaded
“¢ Power-assisted rack-and-pinion steering allows a 39-foot curb-to-curb turning circle
for maneuverability in tight urban spaces
“¢ Bulkheads, racks, bins and other upfits can be mixed, matched and configured to suit many specific commercial applications and needs

“With interest in eco-friendly vehicles stronger than ever among commercial and government fleet operators, the Transit Connect Electric promises to offer another unique solution for their needs,” said Gerry Koss, Ford fleet marketing manager.

November 5, 2012 Omar Rana Comments Off on TIME names Tesla Model S one of the ‘Best inventions of the year 2012’