Mercedes-Benz has officially kicked of series production of the new 2011 SLS AMG at its Sindelfingen plant, the largest Mercedes-Benz plant.

“Made in Sindelfingen also stands for the very highest production and product quality where the SLS AMG is concerned,” says Dr. Dieter Zetsche, Chairman of Daimler AG and CEO of Mercedes-Benz Cars. “From the end of March, our customers will be able to verify this for themselves.”

The 2011 Mercedes-Benz SLS AMG will be hand-built for the highest quality for the aluminium spaceframe, the engine and the final assembly. Market launch will begin in spring 2010.

Check out a video of the Mercedes-Benz SLS AMG in Action.

Hand-built for the highest quality: The Mercedes-Benz plant in Sindelfingen starts production of the SLS AMG

The new gullwing model is now at the starting line: following its world premiere at the International Motor Show in Frankfurt/Main in September 2009, series production of the SLS AMG is now commencing in Sindelfingen, the largest of the Mercedes-Benz production plants.

“The Mercedes-Benz SLS AMG has been extremely well received by our customers,” says Dr. Joachim Schmidt, Head of Sales and Marketing at Mercedes-Benz Cars. “Even in advance of the actual market launch, orders have considerably exceeded our expectations. This shows that the exciting design and extraordinary concept of our gullwing model precisely meet the taste and aspirations of potential customers.”

In summer 2008 the Mercedes-Benz plant in Sindelfingen was presented with the J.D. Power Award by the renowned US market research institute J.D. Power and Associates. This award goes to the automobile production plant with the best delivery quality worldwide. “We are very proud that the new gullwing model is being produced in Sindelfingen. The J.D. Power Award for worldwide top quality will directly benefit buyers of the SLS AMG,” says Volker Mornhinweg, Chairman of the Board of Management, Mercedes-AMG GmbH.

A heavy emphasis on hand-production is a characteristic feature of the SLS ““ for the aluminium spaceframe, the engine and during final assembly. The chassis and aluminium bodyshell are produced by Magna Steyr Fahrzeugtechnik GmbH in Graz/Austria. This highly respected system partner is able to look back on many years of cooperation with Daimler, as the Mercedes-Benz G-Class has been in production there since 1979. Innovative joining techniques are used in the lightweight spaceframe of the SLS AMG, which tips the scales at only 241 kilograms. Hand-production is also the order of the day at the AMG engine workshops in Affalterbach, where the 420 kW (571 hp) AMG 6.3-litre V8 power unit is assembled on the “one man, one engine” principle.

The assembly lines and production facilities in Sindelfingen were brought up to the very latest standards for final assembly of the Mercedes-Benz SLS AMG. This is where specially selected, highly qualified specialists produce the gullwing model substantially by hand. Premium quality is not only ensured by continuous monitoring of the ongoing production process. At the end of the production process, the entire vehicle is subjected to further, extensive quality checks.

The new Mercedes-Benz SLS AMG dazzles with its purist design, intelligent lightweight construction and superior handling dynamics, and is bound to cause a sensation in the super sports car segment. The new SLS AMG is nothing short of a masterpiece by Mercedes-AMG GmbH. As its first completely independently developed vehicle, the super sports car is the highlight in the company’s more than 40″‘year history.It shows that AMG has development expertise at the highest level.

The unrivalled technology package of the SLS is an alluring proposition: aluminium spaceframe body with gullwing doors, AMG 6.3-litre V8 front-mid-engine developing 420 kW (571 hp) peak output, 650 Nm of torque and dry sump lubrication, seven-speed double-declutch transmission in a transaxle configuration, sports suspension with aluminium double wishbones and a kerb weight of 1620 kilograms based on the DIN standard ““ this superlative combination guarantees driving dynamics of the highest order. With a front/rear weight distribution of 47 to 53 percent and the vehicle’s low centre of gravity, this extraordinary combination guarantees performance figures at the highest level. The gullwing model accelerates from 0 to 100 km/h in 3.8 seconds, and has an electronically limited top speed of 317 km/h. A fuel consumption of 13.2 litres per 100 kilometres (combined) makes it one of the best in the competitive line-up.

In Germany alone, the SLS AMG has received a number of major awards in recent months: for example the coveted “iF product design award 2010” and the prestigious “Golden Steering Wheel 2009” award. Other awards include the “Auto Trophy 2009”, “TOPauto 2010” and the “Best new IAA product” award presented by AutoScout24.

Video: Sitting inside the Ferrari 458 Italia as it laps the Monza circuit

April 11, 2011 Omar Rana Comments Off on Video: Sitting inside the Ferrari 458 Italia as it laps the Monza circuit 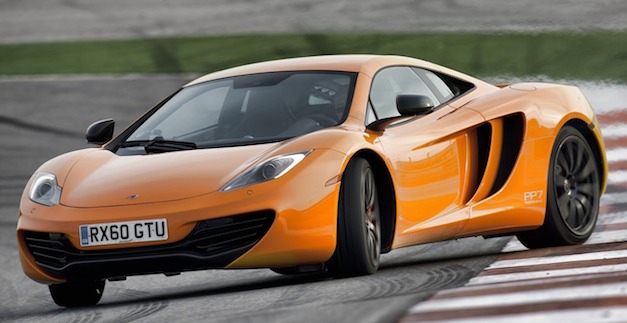 Report: Don’t look at next McLaren F1 to be a top speed king, production to be limited

March 19, 2012 Omar Rana Comments Off on Report: Don’t look at next McLaren F1 to be a top speed king, production to be limited