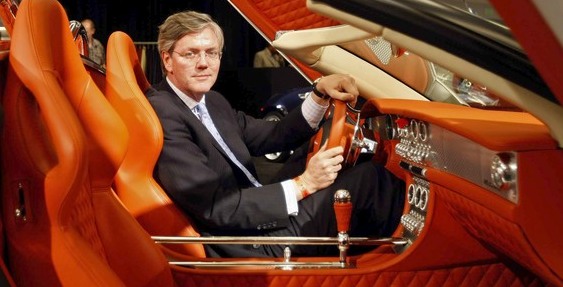 Yesterday, General Motors confirmed that it has reached an agreement with Spyker Cars N.V. to sell its Saab brand to the Swedish supercar manufacturer. With all the delays, rumors and speculations, you may be wondering what actually went on behind closed doors and how much Spyker will actually end up paying for Saab.

According to a report by Automotive News, Saab has Spyker’s 50-year-old CEO Victor Muller to thank. Apparently Muller, who runs an unprofitable manufacturer that built 43 high-end sports cars last year, didn’t want to Saab to go down after being unprofitable for GM since 1990. Sounds crazy right?

“Our brand values are closely related to that of Saab,” Muller told Automotive News. “Both Saab and Spyker are highly individualistic, both have aircraft heritage, and both follow independent Scandinavian and Dutch thinking. There were so many things at work here. It was such a complex deal — trying to take a company that was part of General Motors for 20 years and carving that out as a different business.”

Muller has put together a third financing package with a $550 million loan from the European Investment Bank.

When will see the fruits of this deal? Only time will tell.

Check out the Spyker press release below for more details.

ZEEWOLDE, The Netherlands (26 January, 2010) – General Motors Company and Spyker Cars N.V, today confirmed the details of a binding agreement over the transfer of ownership of Saab Automobile AB of TrollhÃ¤ttan, Sweden. The transaction is expected to close in February and Saab Automobile will exit the orderly wind down process in line with that timetable.

The transaction will be accomplished as follows:

Spyker acquires from Saab Automobile Investering AB, a subsidiary of General Motors (“GM”), all the issued and outstanding ordinary shares in the capital of Saab Automobile A.B. (“Saab”) for a consideration of USD 74 million (“Purchase Price”).

Upon completion of the transaction GM will retain redeemable preference shares of USD 326 million. The preference shares represent less than 1% of the voting rights in the capital of Saab. The mandatory redemption date is 31 December 2016 and Saab has the right to request voluntary redemption at any time prior to this date. The preference shares carry a dividend entitlement of 6% starting from January 2012, increasing to 12% as from July 1, 2014. The dividend over 2012 will be added to the principal, but as from January 1, 2013 the dividend is payable in cash. Should Saab have insufficient distributable reserves to pay the cash dividend it will be added to principal increased with a penalty factor.

In order to allow Saab to operate on a stand-alone basis outside GM, Saab and GM will enter into a number of ancillary agreements. As part of the transaction, Spyker intends to negotiate the acquisition of all the outstanding shares in Saab Great Britain Limited, the UK distribution, marketing and sales company for Saab from General Motors UK Limited.

Spyker will issue a corporate guarantee not exceeding USD 10 million for Saab’s obligations to and for the benefit of the financing company GMAC.

Spyker will as soon as practically possible convene a general meeting of shareholders to approve the transaction. Spyker obtained irrevocable voting undertakings to vote in favour of the transaction representing the voting majority of its current shareholders.

It is the intention to change the name of Spyker Cars N.V. at that general meeting of shareholders to Saab Spyker Automobiles N.V.

As back-up financing, Spyker entered into a EUR 150 million Equity Credit Line Facility with GEM Global Yield Fund Limited (“GEM”) for a term of 3 years. According to this facility, Spyker may issue shares to GEM at 90 per cent of the volume weighted average price of the shares over a period of 15 trading days following a draw down notice sent to GEM by Spyker. In relation to the GEM facility, Spyker has issued to GEM share warrants in respect of 1,570,000 ordinary shares at an exercise price of EUR 4 per ordinary share. The warrants have a 5 year term.

The object of acquisition

In spite of media reports that certain parts have already been sold off, the object is Saab as a complete entity and going concern with all IP rights, trademarks, facilities and other infrastructures. The sale of pre 2003 Saab 9-3 and current Saab 9-5 technology to BAIC in December 2009 did not result in any part of Saab’s business being divested or devalued. On the contrary, Saab has already started the production of the new generation Saab 9-5 in TrollhÃ¤ttan.

As from Closing of the Saab acquisition, the ownership structure of Spyker will change as follows:

Tenaci Capital B.V. (“Tenaci”), a company wholly owned by Mr. V.R. Muller has made a successful bid on Mr. V. Antonov’s current shareholding in Spyker consisting of 4.6 million ordinary shares. As agreed in 2007, when Mr V. Antonov acquired his shares in Spyker, Mr. V. Antonov will cause the transfer of the priority share to Spyker if and when he would dispose of his shareholding. A resolution to cancel the priority share will be proposed at the upcoming EGM.

Messrs. N. Stancikas, M. Bondars and Mr. V. Antonov will retire as members of Spyker’s Supervisory Board effective as per the date of Closing.

Tenaci will grant to Spyker two loans. One for an amount of USD 25 million towards payment of part of the Purchase Price for Saab upon completion of the transaction. A second loan for an amount of EUR 57 million for repayment of all of Spyker’s current outstanding loans to banks and other financial institutions controlled directly, or indirectly by Mr. V. Antonov. This loan mirrors the existing terms (including the lender’s right to convert EUR 9.5 million into ordinary shares at a conversion price of EUR 4.00 per share).

The sale will be subject to customary closing conditions, including receipt of applicable regulatory, governmental and court approvals. Other terms and conditions specific to the sale are not being disclosed at this time.

Victor R. Muller, Spyker’s CEO, stated: “We are very much looking forward to being part of the next chapter in Saab’s illustrious history. Saab is an iconic brand that we are honoured to shepherd. We are delighted to have secured the jobs and livelihoods of thousands of loyal Saab employees, suppliers and dealers and to have given reassurance to the 1.5 million Saab drivers and enthusiasts around the world. It was breathtaking to see so much support from the global Saab community over the last months which not only shows the strength of the brand but also helped us in our relentless determination to get the deal done.”

“Spyker Cars will provide Saab with the backing required to compete as a competitive global brand along with an entrepreneurial leadership team sensitive to the uniqueness, heritage and individuality of the Saab brand. I would like to extend my sincere gratitude to Vladimir Antonov for his formidable support during the past two years. His contribution has allowed Spyker to get to the point that this transaction was made possible. I also want to extend my gratitude to Messrs. Stancikas and Bondars as Members of the Supervisory Board. They have made very valuable contributions to our company during their respective terms.”

“Finally I would like to thank the Swedish Government for its constant support for our efforts culminating in granting the Guarantee in favour of the European Investment Bank today for an EUR 400 Million loan to Saab which we hope to secure in the coming weeks.”

Jan Ã…ke Jonsson, CEO of Saab Automobile AB said: “It has been a challenging 15 months for Saab but our global organization has shown a fighting spirit that will serve us well going forward. The agreement with Spyker Cars has secured Saab’s future and will enable us to maximize the brand’s potential through an exciting new product line-up with a distinctly Saab character.”

“Today’s news is great for Saab’s customers, dealers, suppliers and employees around the globe. The level of passion and support shown to Saab over recent months has been remarkable and I would like to take this opportunity to thank all of those people who continued to believe that Saab deserved a future. Now we aim to get back to the execution of our business plan and with the continued support of our employees and business partners I am confident we will succeed.”

Nick Reilly, President GM Europe, added: “As a responsible corporate citizen in Europe, and throughout the entire period, GM has always had the hope to find a positive solution for Saab that would avoid a wind-down of the brand. We have worked very hard with many parties, including governments and investors, and I’m very pleased that we could come to such a positive conclusion that preserves jobs in Sweden and elsewhere. GM will continue to support Saab and Spyker Cars on their way forward.”