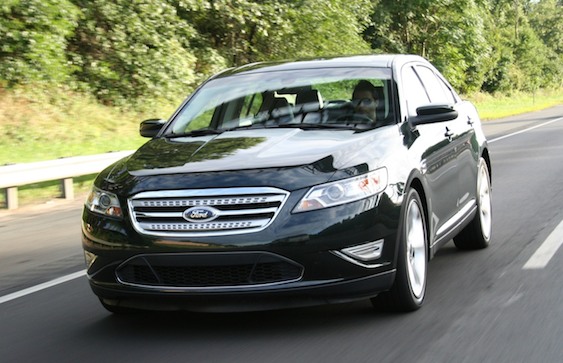 During a period of deep recession, when GM and Chrysler were chomping at the bit for government funds and Detroit was looked at as nothing more than an output engine for gas-guzzling cars, Ford was hard at work redesigning their much-loved Taurus and were working on bringing back the legendary high-performance Taurus SHO (Super High Output) for the 2010 model year, but this time, they were doing it with the environment in mind.

There is quite a community of enthusiasts that hold this ‘sleeper’ performance vehicle in high regard, including Tonight Show host Conan O’Brian. There are currently 1,000 active club members and 10,000 registered users of an online forum community that share Mr. O’Brian’s passion. They may be somewhat disappointed however, to learn that instead of a V8 engine, Ford opted for a 3.5L V6 EcoBoost engine for the Taurus SHO revival.

Before jumping to the conclusion that Ford forgot the SHO’s performance roots and opted instead to franchise the name out to a tree-hugger vehicle, bear in mind that the 3.5L V6 EcoBoost is turbocharged; twin-turbocharged.

The first thing you notice when you see the outside of the 2010 Taurus SHO is that it is enormously large when compared to its competitors. The second thing you notice is that it looks very similar to the standard Taurus; however, that is the very idea behind the car. “Taurus SHO was always a stealth high-performance car,” said Earl Lucas, exterior design manager. “The new SHO builds on the expressive design of the 2010 Taurus, adding subtle cues that set it apart.” With that in mind, the 2010 SHO shares the same tall and bulky profile as the standard Taurus, but with slight modifications.

Though the 2010 Ford Taurus SHO does present a sharper exterior than the standard edition, we expected a lot more, considering the nearly $40,000 price tag. It is reported though, that the 2012 Taurus SHO will have a little more to be desired aesthetically.

The 2010 Ford Taurus SHO is available with two package choices:

The Rapid Spec 401A package runs approximately $2,000 and includes;

The Rapid Spec 402A package runs approximately $3,700 and includes everything included in the 401A package plus;

Though interior quality definitely trumps past models (by a huge margin), there is still a little to be desired considering the almost $40,000 price-tag. Some controls knobs and upholstery materials felt a bit flimsy for a car in that price bracket. Nonetheless, the space-ship like layout of the Taurus SHO with plastic carbon fiber like aluminum trim makes you forget about the minor nuisances, especially when you put the pedal to the metal.

Overall, the interior is extremely comfortable with the vast rear-leg room and plush, wide seats – fitting 5 adults with ease.

Despite the lack of V8 engine, the SHO is far from disappointing when it comes to being a performance sedan. The 3.5L V6 twin-turbocharged EcoBoost engine produces 365-hp at 5,500 rpm and delivers a maximum torque of 350 lb-ft. The extremely responsive engine is always ready to move, regardless of what speed or gear the car is in when one stomps on that accelerator. The 6-speed 6F55 SelectShift Automatic Transmission and all-wheel-drive system take the SHO from 0 to 60 mph in an impressive 5.2 seconds with a top speed that is governed at 133 mph. While many are quick to point out that the 133 mph is 10 mph lower than the 1989 Taurus SHO, we highly doubt you’ll be hitting that speed in your SHO on any major U.S. highway without attracting attention from cops.

The 2010 Ford Taurus SHO is not without flaw however. The steering is lifeless, the braking is subpar and it weighs in at a whopping 4,361 pounds. The brakes are very effective, but fade rather quickly. The curb weight and loose steering contribute to the presence of understeer and causes the car to handle poorly when taking turns at high-speeds. Also, one thing we do wish that the 2010 Taurus SHO did have was launch-control.

As for those wondering how effective the EcoBoost technology is in saving fuel – the EPA estimates that the 2010 Ford Taurus SHO will return a fuel-economy of 17/25 mpg (city/highway), meaning you will experience normally aspirated V8 power without compromising the V6 fuel economy. Throughout our week-long test we averaged a combined fuel-economy of 19 mpg, which is pretty impressive for a car in this segment.

The price tag on the 2010 Ford Taurus SHO can be a tad steep, but if you happen to be one of the many SHO enthusiasts out there, the $37,995 price-tag won’t sway you. Ford names the Audi A6, Lexus GS, and Toyota Avalon as its key competitors, though we would probably say that the 2010 Taurus SHO realistically shares a class with the likes of the Dodge Charger RT, which starts at approximately $33,000 and 2009 Pontiac G8 GXP, which starts at $37,610. Even with the $5,000 price premium, we still pick the SHO over the Charger RT. When compared to the 2009 Pontiac G8 GXP – well with Pontiac dead, you don’t really have a choice now do you?

Audi A8 to star in new Transporter TV series

July 13, 2011 Omar Rana Comments Off on Audi A8 to star in new Transporter TV series