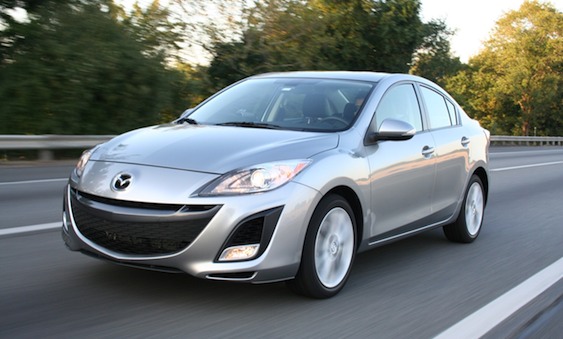 Introduced in 2004 as an answer to the Honda Civic, Toyota Corolla, and Ford Focus, the Mazda3 has undergone a much needed design overhaul for the 2010 model year. The ultra-bland design of the 3 prompted Mazda to redesign their entry-level sedan and unveil the second-generation at the 2008 LA Auto Show. The new Mazda3 is all grown-up and this time around, may even trump the Ford Focus ““ with which it shares a chassis ““ if you don”t mind a front fascia reminiscent of Pixar”s CARS and a rear end that reminds you of an alien.

Click through to read more and view our high-res image gallery (at the bottom of the article).

The exterior styling of the Mazda3 offers a love it or hate it design, though it definitely offers a more dramatic design than the Corolla, Civic, or Focus. The car looks almost cartoonish with its big smiling front end grill, though this feature is not merely an aesthetic one, as it provides a large opening to keep air flowing to the engine.

Despite the cartoonish exterior styling, the 3 is a far better looking vehicle than its counterparts.

When trying to determine quality when purchasing a new car, most attention is naturally given to the interior, and the Mazda3 does not disappoint there. Our test-vehicle was outfitted with leather trimmed seats, and leather door panel inserts. While these features may add a bit to the price of the car, they combine to create a very luxurious look and feel inside the car.

Power on the base model comes courtesy of a peppy 2.0L DOHC 16-valve 4-cylinder engine that puts out 148-hp and peaks at 135 lb-ft of torque, all while increasing fuel economy by 10% over the last generation with 33 mpg highway rating.

The Grand Touring model however, boasts a little more pep with its 2.5L MZR DOHC 16-valve 4-cylinder engine with VVT putting out 167-hp and a maximum torque of 168 lb-ft. Though larger and more powerful than its 2.3L predecessor, the Mazda3 Grand Touring manages an estimated fuel-economy of 22/29 mpg (city/highway).

Though the Mazda3 is hardly a high-performance compact car ““ it”s not the Speed3 after all ““ its still has decent pick-up, going from 0 to 60 mph in 7.9 seconds. Throttle response and acceleration are also commendable considering the compact design of the car.

The “10 Mazda3 also handles outstandingly, handling corners at high-speeds sharply and quickly. This generation handles markedly better than its ancestor with a tighter steering column.

So it looks good (depending on your taste), offers a lot of options, is well powered, and handles great, but how is it priced?

The Grand Touring edition with 5-speed automatic with manual shift mode starts at $23,050, compared to the:

Really, at the end of the day, the 2010 Mazda3 may be smiling at you because it’s happy you made a good choice when shopping in the compact sedan segment.

November 30, 2011 Alexandra Comments Off on Report: Orders for the Toyota Prius Plug-in Hybrid open in Japan