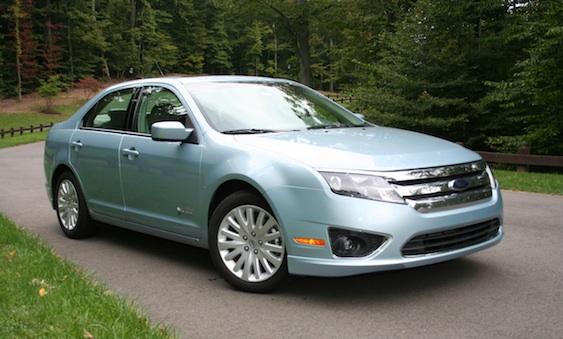 By now, many of you should know that we are test-driving the new 2010 Ford Fusion Hybrid this week. To give the most realistic feedback on how the Fusion Hybrid performs in terms of fuel-economy, we will be driving the car as we would any other car – with the air condition on and stepping on the accelerator when needed. So far, we’ve driven the 2010 Fusion Hybrid a total of 68 miles and have managed a total of 35.9 mpg. We’ll keep you updated along the way so stay tuned. Also, if you have any questions you want to ask us – feel free to send us a Tweet and we’ll be sure to answer right away (as long as we’re not driving of course).

To answer some questions from yesterday:

Lunatus: I’ve had to opportunity to drive the 2009 Toyota Prius a couple times and one of the things I find unnerving is switch between electric and gas modes. As it changes from one mode to the other, the car has a small tremble. When approaching a stop light I felt this slight shaking and thought the engine was failing. Does the Fusion Hybrid, also experience a noticeable tremble when switching from gas to electric mode?

No – we have felt no such tremble. It’s a very quick and smooth switch from electric to gas mode. Quite amazing actually.

Gigan and Kieran: Please let us know if you think it is worth the $ over the basic i4 version. Can you give some type of comparison against the regular gas-only Fusion?