Jay Leno will be premiering his self-named show next called “The Jay Leno Show” on September 14. Influenced by Top Gear, a part of the show will require celebrities to compete in the “Green Car Challenge” for best track times.

Ford has plans to put out four electric-vehicles on the road in North America by 2012. The battery electric Focus and an electric version of the Transit Connect will be two of the four.

– Ford and the new “The Jay Leno Show” on NBC are teaming up to showcase battery electric vehicle (BEV) technology as part of the show’s “Green Car Challenge,” premiering Sept. 14

– Ford is the only automaker to participate in the challenge, which previews four electrified vehicles the company will introduce in North America during the next three years ““ including a battery electric Transit Connect in 2010 and a battery electric Focus sedan in 2011

DEARBORN, Mich., Sept. 9, 2009 ““ Ford Motor Company is teaming up with “The Jay Leno Show” and providing an all-new battery electric Ford Focus that celebrities will drive as a way to showcase Ford’s leadership on fuel efficiency and electrified vehicles.

Ford’s electric Focus will be the exclusive vehicle for The Jay Leno Show in a segment the host calls the “Green Car Challenge.” The battery electric vehicle, specially made for the show, foreshadows elements of the electric Focus that Ford will begin selling in North America in 2011.

“Having our Focus battery electric vehicle on the show is a great way to demonstrate how fun to drive these cars really can be,” said Lisa Drake, chief engineer, Ford Hybrid and Battery Electric Vehicle Programs. “Beyond the immediate excitement of driving, it demonstrates that Ford is investing in this technology and that we’re committed to electric vehicles.”

Ford has an aggressive plan to put at least four electrified vehicles on the road in North America by 2012, including the Focus BEV in 2011, as well as new hybrids and a plug-in hybrid.

“Ford is absolutely committed to delivering best-in-class fuel efficiency with every new vehicle we introduce,” said Derrick Kuzak, Ford group vice president, Global Product Development. “The Focus showcases how electric vehicles can be smart, green, fast and fun. It also illustrates Ford’s commitment to fuel efficiency and doing our part to contribute to a better world.”

“The Jay Leno Show”
Leno will showcase Ford’s electric Focus when the show kicks off Sept. 14. Celebrity guests will complete against each other in the “Green Car Challenge” segment.

Ford’s hybrid and battery electric vehicle program team worked together with Ford Racing to develop the special BEV for the show. It took three weeks to build the car and another couple of weeks to properly tune the suspension so it could be driven fast on a racetrack. The development work was done at Ford’s Michigan Proving Grounds in Romeo, Mich.

The Focus BEV built for the show has a split battery pack, with one battery in the cargo area and one underneath the car in the space normally occupied by a fuel tank. Because this Focus is built to race, it is equipped with a roll bar and five-point harness for the driver.

By 2013, Ford will offer EcoBoost engines in 90 percent of its product lineup with annual volume of vehicles with EcoBoost at 1.3 million globally.

Ford also has four hybrid vehicles on the road today, including the Ford Fusion Hybrid, Ford Escape Hybrid, Mercury Milan Hybrid and Mercury Mariner Hybrid. At 41 miles per gallon, the Fusion Hybrid is the most fuel-efficient mid-size sedan in America ““ 8 mpg better than the Toyota Camry Hybrid.

“We are committed to delivering new products with the best fuel economy in every segment in which we compete ““ driven in large part by substantial advancements in powertrain technology,” said Barb Samardzich, vice president, Ford Global Powertrain Engineering. “We are focusing on sustainable technology solutions that can be used not for hundreds or thousands of cars ““ but for millions of cars, because that is how Ford truly will make a difference.”

The Focus BEV, which Ford is developing with Magna, will be produced at Ford’s Michigan Assembly Plant. The sedan can be charged from both a standard 110V as well as a 220V wall outlet. 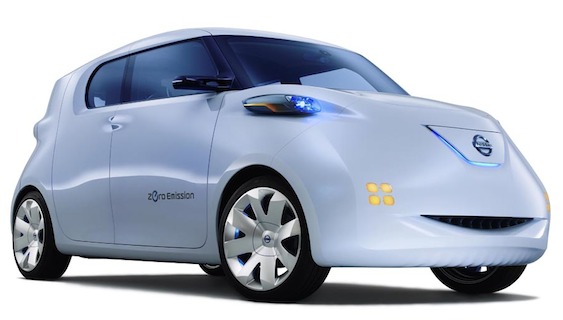 2011 Tokyo: Honda AC-X is a plug-in hybrid that lets you use ‘engine drive mode’