One thing that sets G-Power aside from other tuners is that they are always gunning to break the world record. They currently hold the record for the fastest sedan in the world with their BMW M5 Hurricane RS – a faster version of the original M5 Hurricane. The thing is, when G-Power adds additional letters to the end of its vehicle’s name – it definitely means that you’re in for something special.

A while back, G-Power introduced us to something called the BMW M6 Convertible Hurricane , a 635-hp BMW M6 that could go from 0 to 62 in 4.6 seconds. Well the letters ‘CS’ are about to change everything. Meet the the G-Power BMW M6 Hurricane CS, the fastest BMW coupe with a top speed of 230 mph and a 0 to 62 mph time of 4.4 seconds.

Power comes from a V10 SK III RS (told you it was all about letters) twin-supercharged engine making 750-hp. And it doesn’t stop there. G-Power says that the "air volume these chargers are capable of would theoretically be sufficient for a rated power output in excess of 900-hp."

Of course there is a price to pay for all that power. With all the body modifications you see in the picture along with the performance upgrade – get ready to cash out 360,000 Euros for a complete M6 Hurricane CS.

Aresing/ Ot. Autenzell, 29.04.2009, Creating the ultimate BMW, nothing less was the set target for the G-POWER engineers when they started to designe the G-POWER M6 HURRICANE CS.

The starting basis for this project is the currently most exclusive model in the BMW product range, the BMW M6. Due to the combination of this fantastic basis with the technical innovative products of G-POWER, it was able to create a sports car of superlatives.

Powered by a V10 SK III RS twin-supercharger engine with 750 hp / 552 kW, which enabled the G-POWER world record car to achieve a top speed of 367,4 km/h, the G-POWER M6 HURRICANE CS has got what it takes to be a member of the super car league.

After the G-POWER M5 HURRICANE RS broke the world record for the fastest sedan, G-POWER developed this idea to use this potential to build the world’s fastest BMW coupe, the G-POWER M6 HURRICANE CS.

For this project, the redesigned twin supercharger system of the world record car for the fastrevving V10 was used. Compared to the standard system, both belt-driven ASA T1-313 superchargers, each providing charge air for one cylinder bank, were replaced by larger ASA T1-316 models. They have the capacity to increase the volume of charge air by up to 25 percent but only a fraction of that was utilized in this engine. The air volume these chargers are capable of would theoretically be sufficient for a rated power output in excess of 900 hp.

The pre-compressed air from both superchargers is cooled for maximum power yield in a dualflow water-to-air intercooler painted G-POWER orange. This sophisticated cast-aluminum component replaces the stock airbox above the engine. Because of its close proximity to the engine it produces the same instant throttle response as the production engine, albeit with considerably more torque.

The inner workings of the ten-cylinder four-valve engine are optimized with forged highperformance pistons from Mahle that reduce compression. They have been precisely matched for weight and are much stronger than their production counterparts. The production piston rods and pins also had to make way for special components that can handle the much higher forces.

Further optimized mapping of the engine electronics also contributes to the increased power output of 750 hp / 552 kW, available between 7,500 and 8,000 rpm. The engine delivers its peak torque of 800 Nm at 5,000 rpm.

The G-POWER M6 HURRICANE CS sets new performance records not just for top speed with more than 370 km/h. With sprint times of less than 4.4 seconds from rest to 100 km/h, 9.6 seconds to 200 km/h and 26 seconds to 300 km/h the nearly two-ton coupe is at the head of the pack in these categories as well.

Two tons and a top speed of 370 km/h naturally place extreme demands on the tires, which were mounted on G-POWER light-alloy wheels. Technology partner Michelin provided highperformance Pilot Sport PS2 tires in sizes 255/35 ZR 19 in front and 305/30 ZR 19 on the rear axle.

These tires were the only ones capable of handling the extreme stress. In everyday driving the GPOWER M6 HURRICANE CS runs on 21-inch Silverstone Diamond wheels with size 255/30 ZR 21 and 295/25 ZR 21 tires, due to the capacity of the tires the top speed has to be limited to 340 km/h, than.

In addition to the most powerful BMW engine ever to power a street-legal BMW, favorable aerodynamic properties were of elementary importance. The needed body kit has to fulfill to function at once. First of all it has to generate enough down force to keep the G-POWER M6 HURRICANE CS on the ground at speeds of more than 300 km/h and secondly it responsible for transform the standard BMW M6 into a super sports car.

That is why G-POWER designed a unique widebodykit made entirely from carbon fibre. In addition to producing the desired downforce it is also designed to supply much more cooling air. It consists of front apron, bonnet with vents, rocker panels, wheel arche attachments, rear aprons with diffusor and a rear spoiler wing.

At the same time G-POWER puts the BMW M6 on a diet and makes it lose weight bit by bit. The biggest share is taken by the G-POWER complete exhaust system made entirely form titan which lets the dynamic back pressure drop just like the weight. 24 kg are saved compared to the standard exhaust system.

In the vehicle interior G-POWER switches the standard front seats against racing seats made from carbon fibre, which ensure a perfect support for the drive in its fight against the centrifugal forces. Of course these seats are lighter than the standard seats as well and again the M6 has lost 24 kg.

Weight neutral, but not without effects is the G-POWER suspension package CLUBSPORT. It optimizes the road handling of the G-POWER M6 HURRICANE CS to perfection and is consisting of the continuously height-adjustable G-POWER coil-over RS suspension with nine selectable settings each for bound and rebound and the G-POWER anit-roll-bar kit for front and rear axle.

The option list of the G-POWER M6 HURRICANE CS ends with a true highlight: a Carbon-Ceramic break system with 6-piston calibres and brake discs with 380 mm in diameter. This heavy duty brake system delivers declaration rates beyond the gravity on a constant rate and at the same time are 50% lighter than the standard brakes.

The G-POWER M6 HURRICANE CS can be ordered as a complete car starting at 360.000 Euros.

G-POWER was founded in 1983 and concentrates exclusively on the tuning of BMW automobiles.

The company celebrated its 25th anniversary in 2008. Today it is among the most reputable brands in the global tuning market. G-POWER sets itself apart from the competition with the most powerful important BMW engines developed in-house. 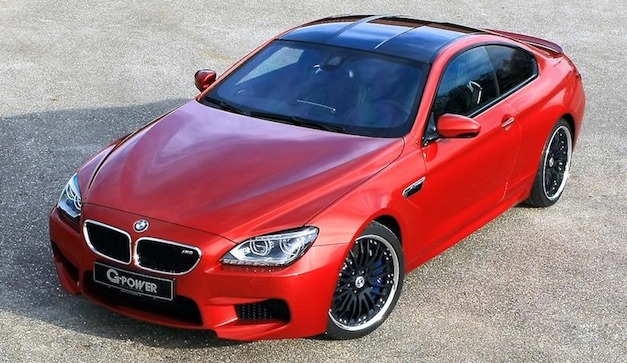