About two weeks ago after Jeremy Clarkson offered his review of the Tesla Roadster, Tesla Motors spoke out about some of the “mischaracterizations” of Top Gear’s review on the electric-car. Overall, Clarkson was pretty impressed by the Tesla until he claimed the onboard battery ran out of power and had to be pushed into the Top Gear shop. He then claimed that the backup Roadster’s brakes failed.

Rachel Konrad, Senior Communications Manager at Tesla Motors, wrote on our blog saying: “Never at any time did Clarkson or any of the Top Gear drivers run out of charge. In fact, they never got below 20 per cent charge in either car; they never had to push a car off the track because of lack of charge or a fault. It’s unclear why they were filmed pushing one into a garage in the video.”

Speaking about the brake failure issue, Konrad said: “The ‘brake failure’ Clarkson mentions was solely a blown fuse; a service technician replaced the Roadster”s pump and it was back up and running immediately.”

Clarkson has now released a response to Konrad’s statement saying: “We never said once that the car had run out of power. The car had to be pushed into the warehouse because you are not allowed to drive cars into a building. We calculated that it would have run out of power after 53 miles but they can’t argue with that because that is a fact.”

“Nobody gives a flying **** how the brakes failed,” Clarkson said. “Whether it was a blown fuse or not, they were still not working.” 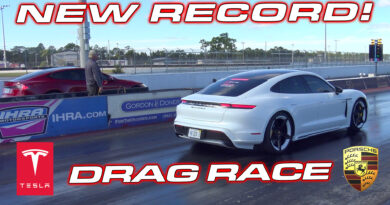