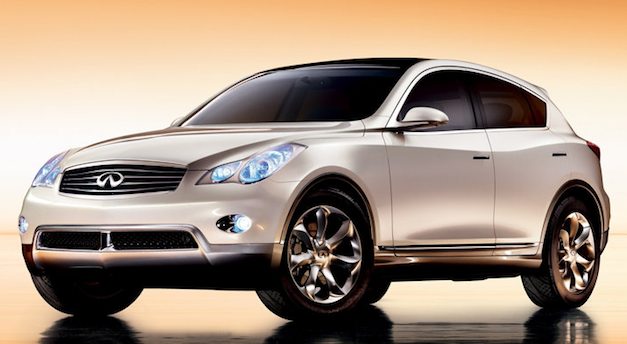 Infiniti unveiled the new G37 coupe and the EX concept at the 2007 New York Auto Show. The 2008 Infiniti G37 coupe will be equipped with a 3.7 liter V6 VQ37VHR engine that produces 330 horsepower and will be Infiniti showrooms nationwide this August. The Infiniti EX Concept is a of an all-new luxury crossover that”s inspired by coupe design, which is set to arrive at Infiniti retailers nationwide by the end of calendar year 2007. The production version of the EX will retain 85% of what you see in the concept. Check out the video, images and press release for more info.

“The new G35 Sedan, which has been named to both Car and Driver’s ’10
Best Cars’ and Automobile magazine’s ‘All-Stars’ list, has set the stage
for the introduction of the new G37 Coupe,” said Mark Igo, vice president
and general manager, Infiniti Division. “The new Coupe builds on the
styling, performance and interior enhancements of the G Sedan, adding the
dynamic style, sporty atmosphere and expressive driving character expected
of a class-leading luxury sport coupe. The line starts here.”

Leading the enhancements to the 2008 Infiniti G37 Coupe is the
first-ever application of the new 3.7-liter V6 engine with VVEL (for
Variable Valve Event and Lift).

Estimated at 330 horsepower and 270 lb-ft of torque, the new “VQ37VHR”
contains approximately 35 percent new and unique parts from the new VQ35HR
engine introduced in the 2007 G35 Sedan just last year. Both the Coupe’s
VQ37VHR and the Sedan’s VQ35HR engines are based on the award-winning VQ
engine series, named one of the “Ten Best Engines” by Ward’s Auto World
magazine for 13 consecutive years.

Rated at an estimated 330 horsepower, the new engine is not only
considerably more powerful than the previous generation G Coupe (rated at
275 hp with 5AT, 293 hp with 6MT), but is expected to offer increased fuel
mileage and reduced emissions levels. Overall vehicle fuel economy
improvements are estimated to be nearly one mpg better than the G35 Sedan
and nearly two mpg better than the previous generation G35 Coupe (actual
EPA mileage estimates and emission information to be announced at a later
date).

“The new 3.7-liter V6 is a true powerhouse – becoming more enjoyable as
you drive it,” said Igo. “And, this powerplant also features Infiniti’s
trademark “Swell” acceleration – introduced on the new G Sedan last year –
with special tuning that builds horsepower almost continually to the
redline like a building wave.”

Developed at test circuits throughout Europe – including the famed
Nurburgring – the G37 Coupe was conceived as a performance thoroughbred.
Handling and ride performance increases come from the G37 Coupe’s enhanced
FM (Front Mid-ship) platform, which has been stiffened 36% from the
previous generation, is lower in overall height and has a wider front and
rear track width.

The front suspension is a double-wishbone design, with a single pivot
lower wishbone and a long upper link. The multi-link rear suspension
separates the shock absorbers and springs, locating the shock absorber
inline with the wheel center. These designs help minimize alignment changes
and reduce suspension friction for nimble handling and smooth riding
characteristics.

Steering is provided by a twin-orifice vehicle-speed-sensing design,
which provides optimum steering effort at both high and low vehicle speeds.
Standard on all G37 Coupes is Vehicle Dynamic Control (VDC), which assists
in enhancing vehicle stability under a variety of driving conditions.

Also available on G37 Coupe is Infiniti’s Intelligent Cruise Control
(ICC) with Preview Braking, which provides a precise following distance
from the vehicle ahead. It also identifies sudden braking situations with
laser sensors to determine distance and relative speed of the vehicle ahead
in the same lane and “pre-pressurizes” the Brake Assist system before the
driver steps on the brake pedal.

“Compared with its predecessor, the G37 Coupe is longer, lower and
wider – indicative of the power and technology of the vehicle,” said Igo.

The strong side character line and side sills integrate with the large
wheel wells and the 18- or 19-inch performance-oriented wheel and tire
packages to transmit an added sense of power and vibrancy.

Available on the new G37 Coupe is an Adaptive Front lighting System
(AFS), which automatically controls the headlight lighting pattern
according to steering angle and vehicle speed to help provide better
visibility at night.

Also standard are 3-point ALR/ELR seat belts (driver’s side ELR only)
and front seat belts with pretensioners and load limiters and adjustable
upper anchors, driver and front-passenger knee bolsters, front seat Active
Head Restraints and the LATCH (Lower Anchors and Tethers for CHildren)
system. Available as part of the Technology Package are brake-operated
pre-crash seat belts with motion sensor on the brake pedal.

The G37 Coupe features Zone Body Construction with front and rear
crushable zones to help disperse crash energy around the passenger
compartment. For occupant safety, the engine is designed to move under the
occupant compartment in a high-speed frontal collision, while a breakaway
construction of the propeller shaft (connected with the engine-drop
function) and the double-wall construction of the bulkhead helps to
minimize cabin deformation, especially in the lower leg area. In addition,
the brake pedal is designed to collapse to help reduce lower leg injuries
in a severe crash.

The 2008 Infiniti G37 Coupe is available in three models: G37 Coupe,
G37 Coupe Journey and G37 Coupe Sport 6MT. In addition to the long list of
standard features on all three models, several options and packages are
available.

“When the original G Coupe was introduced, it proved to the world that
exhilarating sport coupe performance doesn’t have to come in a machine-like
box,” said Igo. “This new G37 Coupe, which we’re proudly showing for the
first time anywhere in New York, is pure G and pure Infiniti – and ready to
take center position on the world automotive stage.”

Infiniti offers a full line of luxury performance automobiles,
including the G sports coupe and sedan, the M luxury performance sedan, FX
premium crossover SUV, and the QX full-size luxury SUV. More information
about Infiniti and its total ownership experience can be found at
http://www.Infiniti.com.

NASHVILLE, Tenn., April 4 /PRNewswire/ — The Infiniti EX Concept,
which makes its world debut at the 2007 New York International Auto Show,
follows in the tradition of previous Infiniti design studies with its
combination of seductive design, elegant interior and advanced technology
systems – including an advanced Around View Monitor (AVM) and Lane
Departure Prevention (LDP) system. And, like many of the Infiniti concepts
that have come before, the new EX Concept is a very real preview of an
upcoming production vehicle – the 2008 Infiniti EX crossover SUV.

“The Infiniti FX, M and most recently the new 2008 G Coupe, can all
trace their evolution from show stoppers to Infiniti showrooms in a short
period of time,” said Mark Igo, vice president and general manager,
Infiniti Division, Nissan North America, Inc. “With this stunning EX
Concept, we’re pleased to announce that along with the basic exterior and
interior designs, the production Infiniti EX will include much of the EX
Concept’s innovative technology, including the Around View Monitor and Lane
Departure Prevention.”

The EX Concept’s sculpted elegance expresses a timeless appeal – sleek
lines that portray speed, grace and finesse. Its layout combines the look
and feel of a luxury coupe – including short front and rear overhangs – and
the ample interior roominess, optimized seating height and luggage space of
an SUV.

“The EX Concept is the perfect fusion of a luxury coupe and a
high-utility SUV,” said Igo. “Its ‘right-sized’ packaging gives it
excellent around town maneuverability, while the wide rear hatch and low
load floor make it a versatile performer for everyday and weekend use.”

The most striking exterior design element of the EX Concept is its
dramatic liquid crystal full-length glass roof panel that is able to change
from transparent to translucent via input from a special touch sensor
system.

“The EX Concept’s glass roof technology is a fascinating study in how
technology can be utilized to change the entire interior atmosphere of a
vehicle by adding or subtracting not just light, but the occupants’ view of
the outside world,” said Igo.

Like all Infiniti vehicles, the EX Concept is conceived to offer a
reinvigorating and engaging interior environment, one that is both
indulgent and inspiring. The “wave-inspired” cabin layout is focused on the
driver, with easy-to-read high-contrast gauges with violet-color
illumination and an electric soft-touch shifter system.

“The EX Concept’s interior is all about driving pleasure and passenger
comfort,” said Igo. “Like the exterior, it offers a coupe-like feel but
surprising utility – ideal for today’s active lifestyles.”

Under the EX Concept’s dramatic body is an equally advanced platform
and powertrain based on the latest Infiniti production hardware. Its
advanced FM platform provides the same high levels of handling precision
and balance as it does for the Infiniti M, FX and G Coupe and Sedan. For
use in the EX Concept, the wheelbase has been shortened to 112.0 inches for
a small turning radius, while the rear multi-link suspension utilizes a low
shock absorber layout to enhance cargo area utility. It rides on 19-inch
7-spoke aluminum-alloy wheels with 245/55R19 tires.

The EX Concept is powered by a V6 engine, coupled to a 5-speed
automatic transmission. The EX Concept also includes an all-wheel drive
system.

The EX Concept’s advanced technology design is highlighted by two
systems that are expected to be the first production versions in the world
when the new Infiniti EX goes on sale in North America in late 2007.

The Infiniti Around View Monitor utilizes small front, side and rear-
mounted cameras to project an all-around view of potential objects on every
side of the vehicle – helping reduce blind spots when parking.

The Lane Departure Prevention system builds on the Lane Departure
Warning (LDW) system that is currently available on the Infiniti FX and M.
Rather than just use an audible/visual warning system to alert the driver
of unintentional vehicle movement outside the designated lane, the LDP
system uses the vehicle’s Vehicle Dynamic Control (VDC) system to help
assist the driver in maintaining lane position if the vehicle inadvertently
starts to drift outside of the lane.

Both Lane Departure Prevention and the LDW systems use a small camera
installed behind the windshield to detect lane markers in front of the
vehicle and calculate its position relative to lane markers and warn the
driver of lane drift (pending lane change without use of the turn signal)
with a visual display and audible buzzer.

If the driver does not return the vehicle in the direction of the
center of the travel lane, the LDP system assists the driver by using
gentle control (generating part of the necessary yaw movement), using the
VDC’s brake actuator to control the brake pressure of each individual wheel
to generate the intended movement.

“Infiniti has taken a leadership position in offering the first
production Lane Departure Warning systems for production vehicles. We’re
now poised to take the next big step with the upcoming EX’s Lane Departure
Prevention system,” said Igo. “We’re confident that the production Infiniti
EX will be just as stylish, dramatic, luxurious and innovative as this EX
Concept show vehicle. The line continues to be drawn.”

The Infiniti EX Concept was created at the Nissan Technical Center in
Atsugi, Japan.

Infiniti offers a full-line of luxury performance automobiles,
including the G sports coupe and sedan, the M luxury performance sedan, FX
premium crossover SUV, and the QX full-size luxury SUV. More information
about Infiniti and its total ownership experience can be found at
http://www.Infiniti.com.