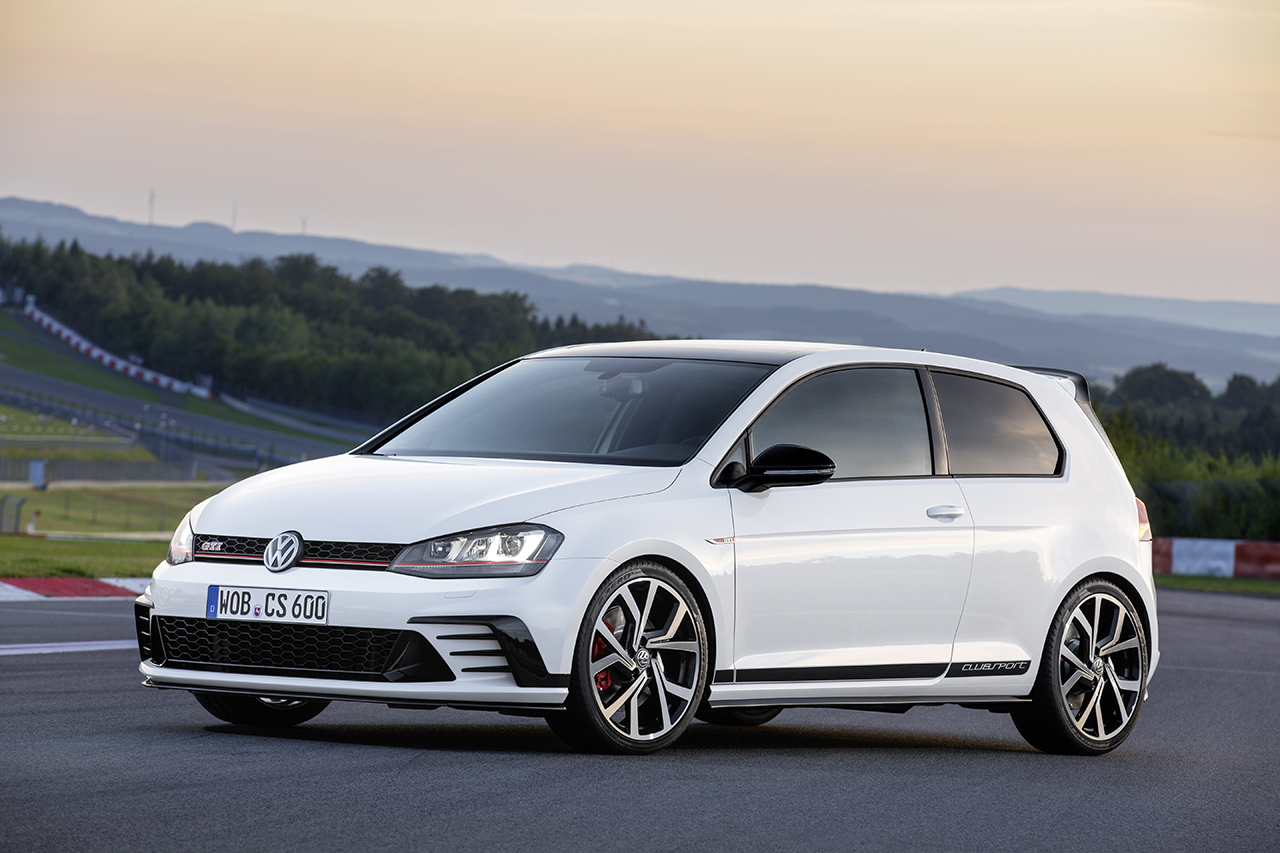 Frankfurt is just around the corner and Volkswagen sought to tease the world with a new hot version of the Golf GTI that we won’t sadly get in the US of A. OH VOLKSWAGEN, Y U DO DIS?

It’s the new 2016 Volkswagen Golf GTI Clubsport and is basically a Golf GTI, but more. More of what?

More power, with an extra 30hp to boot from its 2.0L turbocharged TFSI four for a total of 260hp. It also comes with an overboost function to pump that up to 285hp for around 10 seconds. When mated to a traditional six-speed rower, 0-62 happens in just six seconds flat while the DSG dual-clutch box drops that to just a shade below that figure.

To prove to everyone that you have the Golf GTI Clubsport at your local cars and coffee event, the GTI Clubsport comes with a limited selection of basic colors with an optional contrasting black roof. It also gains a more aggressive body kit with revised front and rear fascias, new side skirts, a slicker rear diffuser, and unique 18-inch wheels with optional 19s available as well.

The inside gains some treatments with racing buckets trimmed in Alcantara, other trim details alluding to the original Golf GTI from 1976, stainless steel kick plates with red GTI badging, and more.

If you’re in Europe and around to catch the Frankfurt Motor Show, the new GTI Clubsport will be available for viewing, and drooling, if you have to trek your jealous behind back to the America of North.

Wolfsburg, September 9, 2015 – At the beginning of 2016, the iconic sporty compact—the Golf GTI—celebrates its 40th birthday. Volkswagen will mark this historic event with a dramatic special edition: the new Golf GTI Clubsport. Volkswagen will present the production version at the International Motor Show (IAA) in Frankfurt, offering a first look at the most powerful production GTI ever.

The company that invented the GTI is thus continuing the tradition of anniversary models, as exclusive special editions also marked the 20th, 25th, 30th and 35th birthdays. The turbocharged and direct-injection engine in the anniversary model delivers an output of 195 kW / 265 PS, 35 PS more than the previous most powerful Golf GTI. That isn’t all, however. For a short time—for about 10 seconds—the driver can increase engine power by an additional 10 per cent to more than 290 PS using an overboost function. This added power is activated simply by pressing the throttle fully.

The Golf GTI Clubsport sprints from 0 to 62 mph in 6.0 seconds with a 6-speed manual gearbox; with the optional 6-speed dual-clutch automatic transmission (DSG), the time is reduced to 5.9 seconds. The Golf GTI Clubsport has a top speed of 155 mph with both transmissions.  Despite all this power and performance, the car is frugal: the manual transmission car has fuel consumption of 33.8 mpg (equivalent to 160 g/km CO2), which improves to 34.8 mpg (155 g/km CO2) with the DSG gearbox.

Not only has the anniversary model got more power, but Volkswagen has also extensively revised the design, equipment and aerodynamics. Due to the high power output and significantly improved downforce, the Golf GTI Clubsport has groundbreaking handling properties at high speeds and breathtaking cornering speeds.

The Golf GTI Clubsport is painted in “Oryx White” (other colors available), with the roof contrasting in black. The exterior designers created a completely new front bumper, new side sills, a new rear diffuser, a new multi-part roof spoiler and exclusive forged aluminum-alloy wheels for the anniversary model. These features immediately make the anniversary model stand out from the regular GTI models.

In terms of style, the side profile of the Golf GTI Clubsport is based on the original GTI: the first generation was characterized by a wide black trim stripe on the side between the front and rear wheelarches at sill level. This stripe is replicated on the side of the anniversary model, paying homage to the 1976 Golf GTI, and is enhanced with “Clubsport” lettering. The black trim stripe is continued at the front around the air scoop incorporated in the front bumper. The optional “Brescia” 19-inch aluminum-alloy wheels were specially designed for the new Golf GTI Clubsport , while the standard 18-inch aluminum-alloy wheels are also a new design. Another special detail is the high-gloss black door mirror caps.

The redesigned roof spoiler, honed in the wind tunnel, is much larger than its counterpart on the current GTI. There is a narrow gap between the black roof area and the wing-like spoiler placed above it. The roof spoiler is finished in high-gloss black on the underside with “Oryx White” above the roof line. The lower rear section of the car has also been individualized. The redesigned, chrome-plated twin tailpipes have been elegantly integrated in the diffuser; the diameter of the tailpipes is much larger than on the regular Golf GTI models. The LED rear lights are finished in dark black-red.

The interior features iconic details that are essential for every GTI, including ergonomic sport seats featuring tartan fabric upholstery, red stitching, a golf-ball-shaped shifter knob and black headliner. These sporty features have been modified for the Golf GTI Clubsport: the seats are folding racing buckets instead of sport seats, for instance, and are partially covered with Alcantara and feature a honeycomb pattern on the backrests and seat cushions. A red line enhances the seat belts. New trim strips in “Honeycomb 40” design on the instrument panel, center console and doors give the interior an even more exclusive appearance. Sporty decorative features include Alcantara trim on the shift lever, an Alcantara sport steering wheel (with GTI emblem, red seam and 12 o’clock marking) and customized floor mats with red edging. When the driver and front passenger open the doors, they see unique stainless steel kick plates with red GTI lettering.

Next-generation Ford Mustang will be designed with global input

March 4, 2011 Omar Rana Comments Off on Next-generation Ford Mustang will be designed with global input

October 23, 2015 Chris Chin Comments Off on Report: Mazda is indeed bringing a rotary RX-9 to Tokyo…supposedly