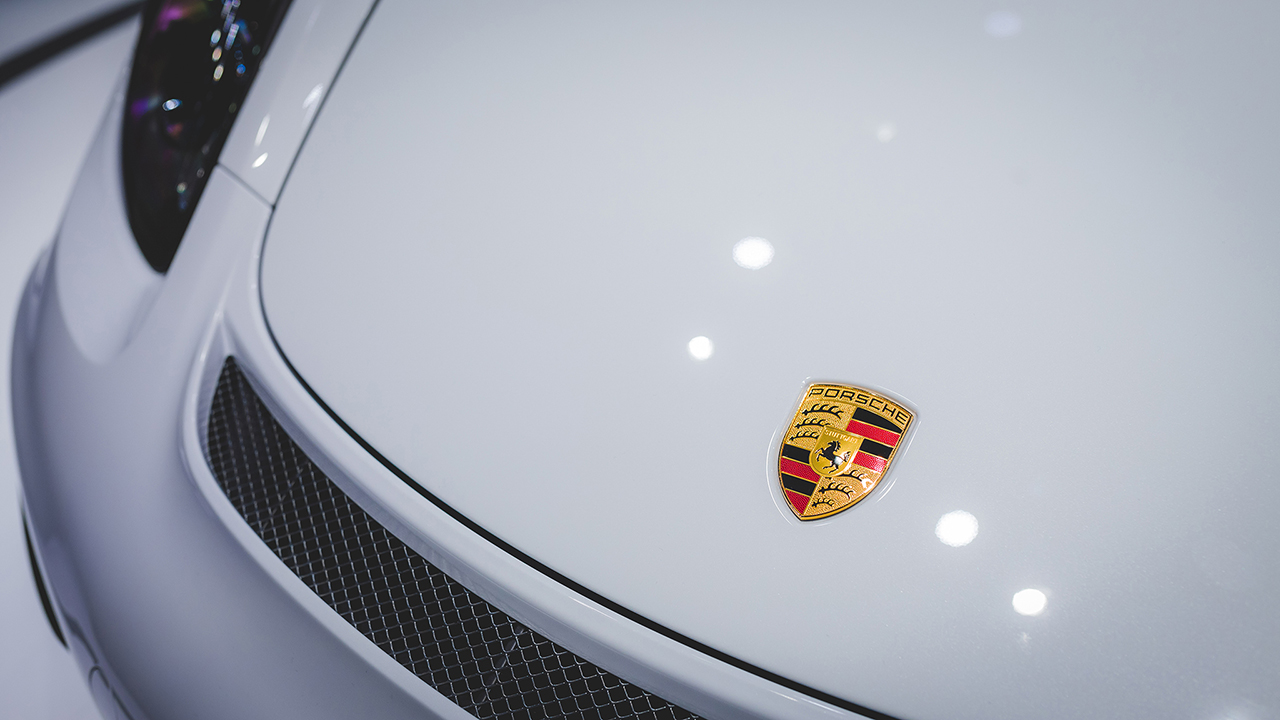 Every year, J.D. Power and Associates release their annual car surveys, which help set the standard for initial build quality and reliability of new cars, while measuring how well each manufacturer does with their quality control.

This is called their renowned Initial Quality Survey, which takes into account how many problems per 100 new vehicles automakers have with new models. And while all automakers seek to improve their quality in balance with their budget, cars are extremely complex machines and no car is without its own set of problems.

But now that the survey is out for the 2015 year, we can better understand where automakers currently position in the realm of initial quality.

And to nobody’s surprise, Porsche has been maintaining their position at the top of the list as the automaker with the least amount of problems per 100 new vehicles sold. This is their third consecutive year in a row in first place.

Traveling down the list, you could see some overall improvements for all automakers polled, given that the average amount of problems per 100 vehicles is down overall from last year.

Other notable changes include the surge in places for some automakers, such as Kia, who jumped up to second place, up from seventh just last year.

Following that, you have Jaguar in third place, which if this was 1985 everyone would laugh in your face. After that is Hyundai in fourth, and BMW in fifth.

Fiat unfortunately still sits at the bottom, but still managed to churn out less problems per 100 vehicles when compared to last year.

For full details and for visual graphics, check them out below. 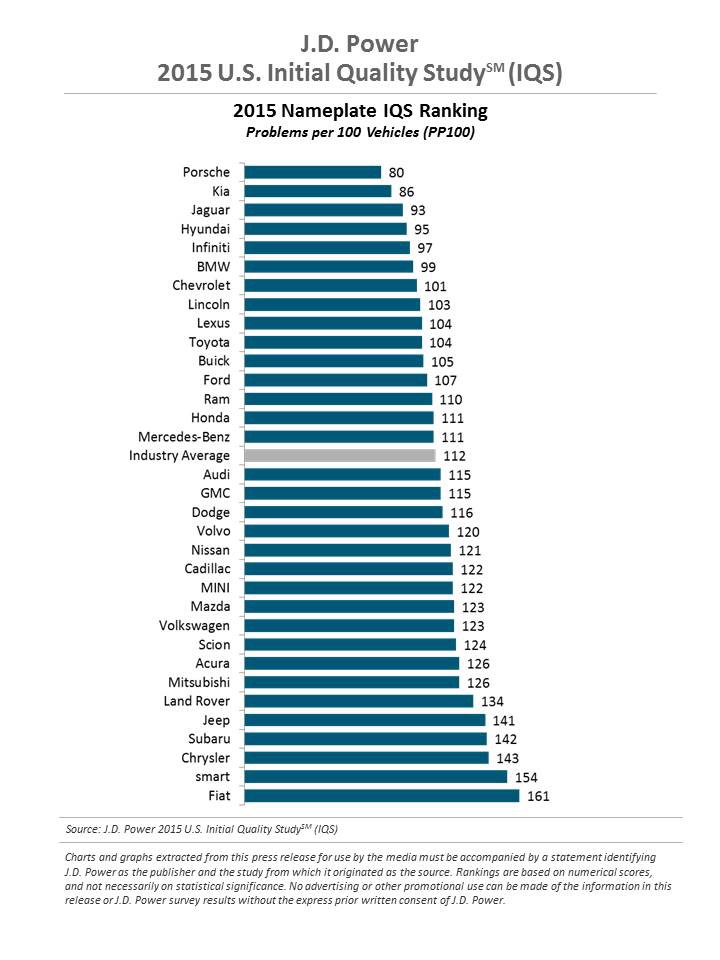 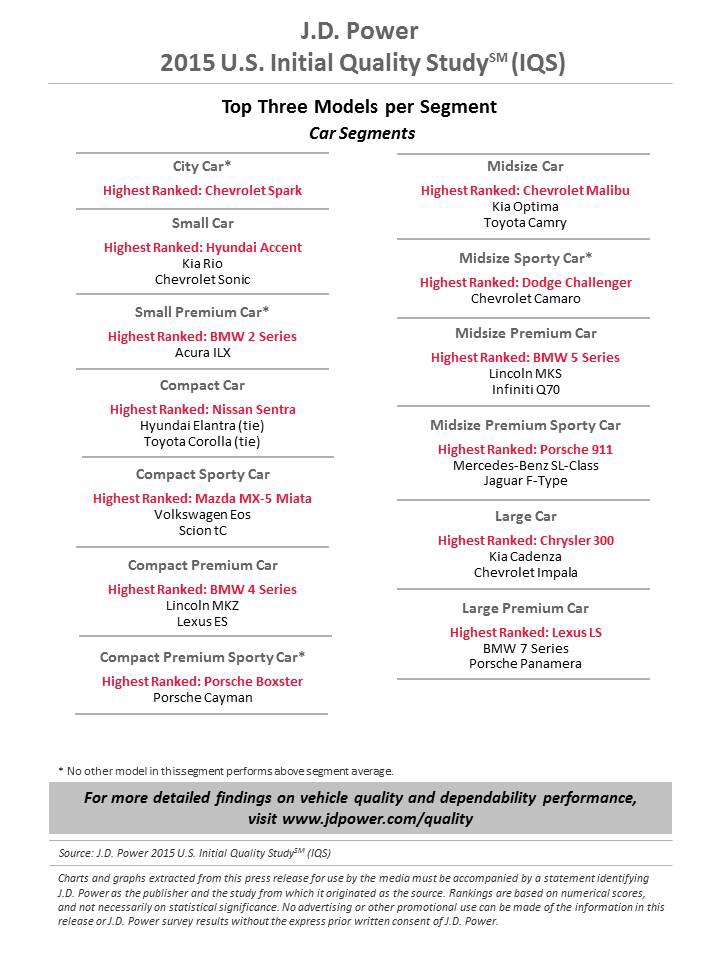 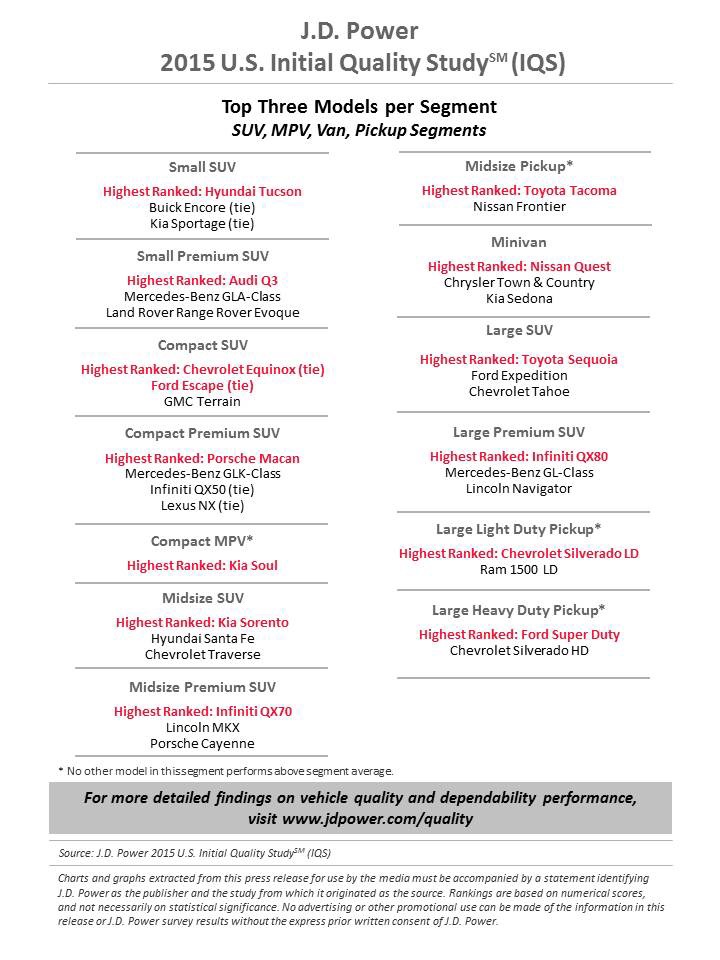 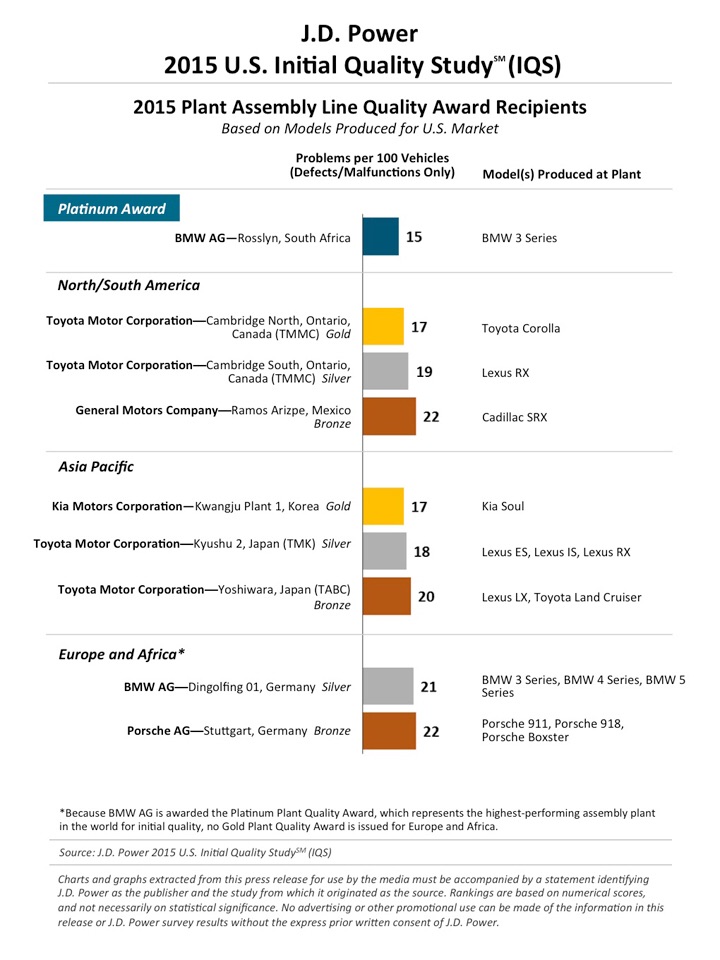 Porsche Ranks Highest among Nameplates for a Third Consecutive Year

WESTLAKE VILLAGE, Calif.: 17 June 2015 — With a significant year-over-year improvement, Korean brands continue to widen the quality gap with other automakers, while Japanese makes collectively fall below industry average for the first time in 29 years, according to the J.D. Power 2015 U.S. Initial Quality StudySM (IQS) released today.

The industry experiences a 3 percent year-over-year improvement in initial quality, averaging 112 PP100 compared with 116 PP100 in 2014.

Although Japanese brands overall experience a 2 PP100 improvement from 2014, this has proven insufficient to keep pace with the industry, causing Japanese makes overall to fall below industry average for the first time in the 29-year history of the U.S. Initial Quality Study. Only four of the 10 Japanese brands included in the study post an improvement.

“This is a clear shift in the quality landscape,” said Renee Stephens, vice president of U.S. automotive quality at J.D. Power. “For so long, Japanese brands have been viewed by many as the gold standard in vehicle quality. While the Japanese automakers continue to make improvements, we’re seeing other brands, most notably Korean makes, really accelerating the rate of improvement. Leading companies are not only stepping up the pace of improvements on existing models, but are also working up front to launch vehicles with higher quality and more intuitive designs.”

Technology Continues to be a Trouble Spot for the Industry

Entertainment and connectivity systems remain the most problem-prone area for a third consecutive year, with voice recognition and Bluetooth pairing continuing to top the problem list.
The majority of models included in the study that have voice recognition systems experience 10 or more PP100 related to this feature.
The number of owners who indicate having voice recognition in their new vehicle has increased to 67 percent in 2015 from 57 percent in 2013. Based on results from the J.D. Power 2015 U.S. Tech Choice Study,SM this will continue to increase as simple wireless device and near field communication are the top two entertainment/connectivity technologies consumers indicate wanting on their next vehicle.
“Smartphones have set high consumer expectations of how well technology should work, and automakers are struggling to match that success in their new vehicles,” said Stephens. “However, we are seeing some OEMs make important improvements along the way. What’s clear is that they can’t afford to wait for the next generation of models to launch before making important updates to these systems.”

Porsche ranks highest in initial quality for a third consecutive year, posting a score of 80 PP100. With a 20 PP100 improvement from 2014, Kia follows Porsche in the rankings at 86 PP100. This marks the first time in the history of the study that Kia has led all non-premium makes in initial quality.

Model awards are spread among several corporations, with many receiving multiple awards.

BMW AG’s Rosslyn, South Africa plant, which produces the BMW 3 Series, receives the Platinum Plant Quality Award for producing models with the fewest defects or malfunctions. Plant quality awards are based solely on defects and malfunctions and exclude design-related problems.

The 2015 U.S. Initial Quality Study is based on responses from more than 84,000 purchasers and lessees of new 2015 model-year vehicles surveyed after 90 days of ownership. The study, now in its 29th year, is based on a 233-question battery organized into eight problem categories designed to provide manufacturers with information to facilitate the identification of problems and drive product improvement. The study was fielded between February and May 2015. 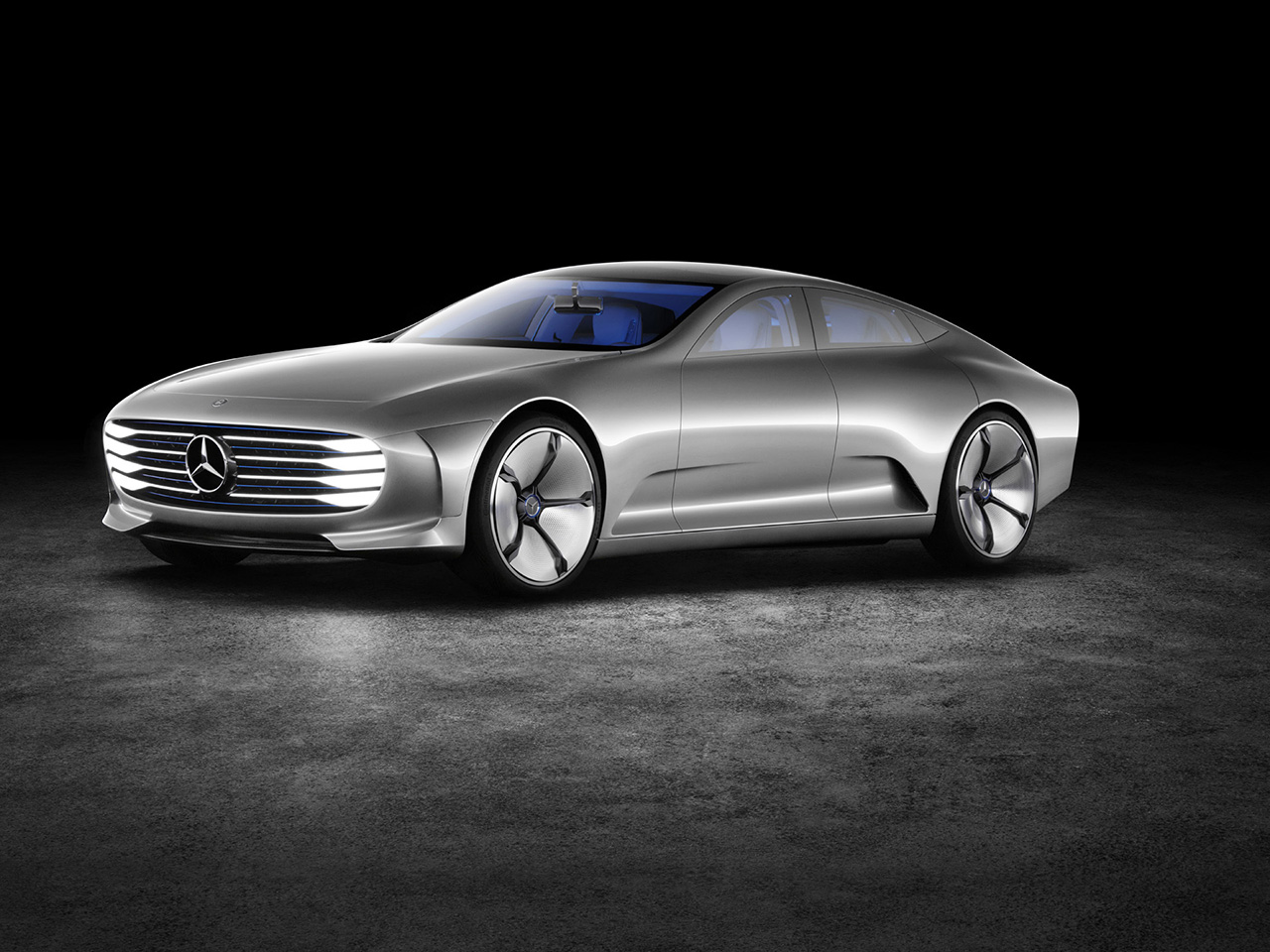 March 19, 2015 Chris Chin Comments Off on Kia teases their new Optima ahead of its debut in New York

Report: The Nissan GT-R to get upgraded again before getting replaced

September 28, 2015 Chris Chin Comments Off on Report: The Nissan GT-R to get upgraded again before getting replaced