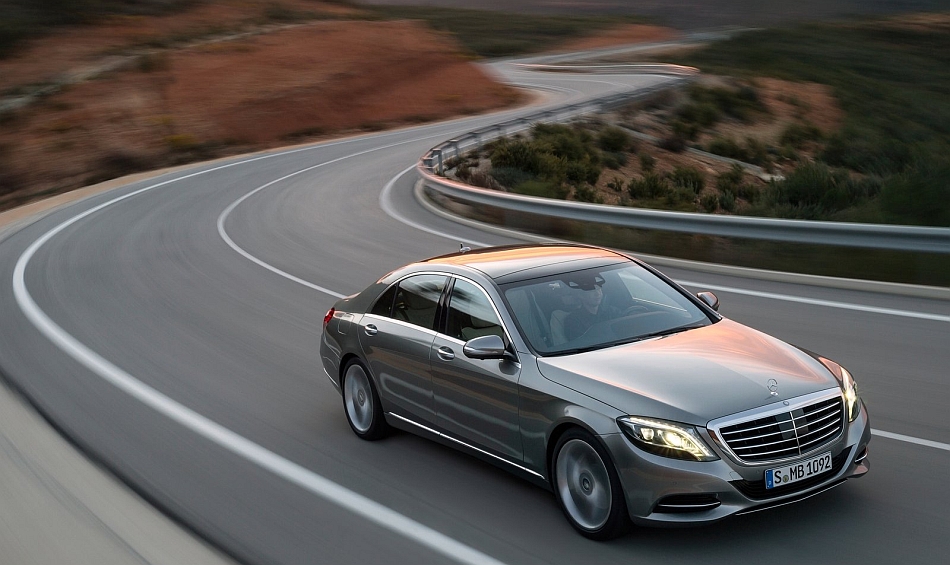 Mercedes-Benz has officially confirmed that the all-new 2014 S-Class was launched today in the United States at dealers across the country. As part of the launch, Mercedes-Benz also released some new TV ad spots to help everyone remember that Germany’s premiere sedan is here.

Within the ad spots, Mercedes-Benz also briefly explores the birth of “The Best or Nothing” slogan, which was mainly inspired by the words of Gottlieb Daimler himself, who often encouraged his factory employees to build the best cars in the world.

The first of the new-generation Mercedes-Benz S-Class model line, the 2014 S550, debuts today at dealerships across the country and on network television as part of an integrated marketing launch.

Long-heralded as the benchmark innovator for luxury sedans, the flagship S-Class cradles its occupants with the latest in luxury — including a hot-stone massage — while providing the most sophisticated accident-avoidance technology on the road today.

“The new S-Class represents the best of the Mercedes-Benz brand,” said Bernie Glaser, vice president of marketing for Mercedes-Benz USA. “The strides we make in the areas of design, safety, engineering and technology — which are pioneered on the new S-Class — will make their way through all our models and eventually into the mainstream. This is what has happened throughout our 127 years, and as a result, there’s hardly a car on the road today that doesn’t owe some of its technology to that constant commitment to innovate and to lead.”

The campaign, which was created by Merkley+Partners (NYC), launches today with two cornerstone broadcast ads. The first, a :60 spot called “Four Words,” explores the origins of the company’s storied tagline “The Best or Nothing.” Transporting the viewer back in time through the 127-year history of Mercedes-Benz, the ad starts inside Gottlieb Daimler’s garage, where the very first automobile was made, then proceeds past the historic Silver Arrow race cars inside the Mercedes-Benz museum in Stuttgart, through design centers, crash facilities, race tracks and more. The ad illustrates how those four simple words written by the founder have challenged Mercedes-Benz to “inspire, provoke and push,” and ends heralding the 2014 S-Class as “our entire automotive philosophy set in motion. Again.”

The companion ad, a :30 spot called “Control,” conveys what makes the S-Class driving experience “a new era of innovation.” The ad takes the viewer along for a nighttime drive through towering cityscapes while showcasing the car’s unique occupant amenities. From a hot stone massage, to interior lighting available in seven colors and even a cabin fragrance system that perfumes the air with a favorite scent, these innovative features illustrate the S-Class as “The highest expression of Mercedes-Benz.”

Both ads go into rotation today on national talk shows (“Today,”  “Nightline,” “Letterman,” “Jimmy Fallon”), national broadcast (ABC, CBS, NBC), cable channels (including Discovery, History, National Geographic, Travel Channel, Golf Channel) and a variety of business and sports outlets.  The spots will also air on such programming as “Modern Family,” “Dancing with the Stars,” “Criminal Minds,” “Elementary,” “Face the Nation,” “Meet the Press,” “ESPN Monday Night Football” and “Sunday Night Football on NBC,” among others. There will be additional rotation in spot markets.

A complementary print campaign oriented around the “It is our entire automotive philosophy set in motion” theme will appear in a centerspread insertion in the Wall Street Journal (October 16) and in such magazines as: Tennis Magazine, Condé Nast Traveler, Wine Spectator, Private Clubs, Executive Golfer, Architectural Digest, Town & Country, Veranda, Playbill, New Yorker, Black Enterprise, Harvard Business Review, Bloomberg Businessweek and Fortune. There will also be a targeted digital component.

About the S-Class
The all-new 2014 S-Class brings new levels of luxury, technology and safety to market. On the inside, the S-Class is designed to appeal to all the senses. With an interior that features heated armrests ionized air purification via the AIR BALANCE PACKAGE, First Class rear-seat luxury, and a Burmester sound system, the S-Class pampers its occupants.  Its fresh, sophisticated exterior design goes hand-in-hand with an intelligent suspension system called MAGIC BODY CONTROL, which sees the road ahead and adjusts the suspension accordingly.

On the safety front, Mercedes-Benz takes one step closer to its goal of accident-free driving, with a portfolio of more than 30 standard and optional active and passive safety technologies called Intelligent Drive. For example, the Driver Assistance Package, available in the 2014 S-Class and 2014 E-Class sedan, wagon, coupe and cabriolet, offers the following content:

Other Intelligent Drive safety features include Attention Assist and Night View Assist Plus with human and animal detection.

The high levels of technology, safety and comfort do not come at the expense of price or fuel efficiency. The new S-Class comes at a price comparable to the outgoing model (in fact, lower on an MSRP to MSRP basis) starting at $92,900 (excluding $925 destination/delivery charge). It will also be available in an all-wheel drive configuration, the S550 4MATIC, and in a high-performance AMG variant, the S63 AMG 4MATIC. Plus, with EPA ratings of 17 mpg city and 26 mpg highway, the 2014 S550 is more fuel efficient than the outgoing model.

Additional powertrain and body style variants of the S-Class will make their debuts throughout calendar year 2014.

For videos and photos from the 2014 S-Class marketing campaign, accredited journalists can visit the MBUSA Media Site at www.media.mbusa.com.

Mercedes aims to sell 2.7 million cars on a global scale by 2020