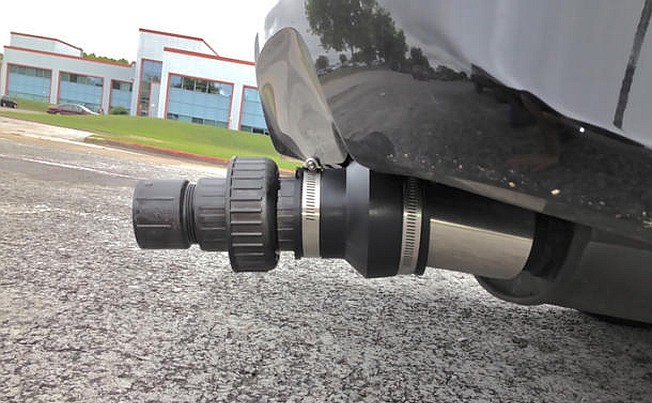 As much as us car enthusiast lot have an unmatched love for internal combustion, it is getting harder and harder to deny the fact that they have a truly profound effect on our planet’s environment. The culprit is obviously carbon dioxide, which is a byproduct formed from the actual chemical reaction of adding oxygen molecules to hydrocarbons (combustion).

Not to mention, with our worldly governments cracking down even harder on carbon dioxide emissions and fuel economy to help protect our planet, it’s very clear cut that automobiles are being blamed as one of the primary causes for the rapid increase in atmospheric carbon dioxide concentration, contributing to a planetary greenhouse effect. From hybrids, to fuel-cells, to electric vehicles, automakers are working overtime to find alternatives—though at the expense of the vector that has led to the creation of what we know as the modern driving automobile enthusiast.

Now though, Discovery News and CNET report on some new finds and developments in the war against carbon dioxide emissions.

According to Discovery News, researchers in the Netherlands have apparently discovered a way to convert carbon dioxide into electricity. At the center for sustainable water technology in Leeuwarden, Netherlands, a scientist by the name of Bert Hamelers claims electricity can be produced through the catalyst of water, by passing CO2 through a body of water and a device containing two special membranes and an electrode in the center. The device then allows positively and negatively charged ions to pass through each of the membranes. The process results in the flow of only one kind of ion, a flow of electrons, which of course means, an electric current.

Through Hamelers research, the carbon dioxide harvesting method has the potential to produce about 1,570 terawatts of electricity annually, the equivalent to about 400 times the annual output of the Hoover Dam.

The process has been apparently stabilized in a laboratory, though now, the challenge is how to scale the process up to infrastructural standards.

On the flipside, CNET discovered an interesting KickStarter project by Ecoviate, called the CO2ube, which touts itself as being a potential solution to automobile-produced carbon dioxide emissions. Remember when Top Gear UK’s Jeremy Clarkson attempted to solve the greenhouse gas problem by retrofitting the exhaust pipe of a Range Rover and Jaguar XF with various ambitious-but-rubbish Top Gear inventions?

Well, it’s sort of similar, though much smaller in size. The CO2ube is a small attachment for the end of your tailpipe. And inside sits a combination of algae and sodium hydroxide, which filters out CO2 from your car’s exhaust.

Working prototypes are claimed to be out in the field undergoing testing. One CO2ube is currently going for around $45 according to the pledge price.

Much like Top Gear’s versions, there are notable drawbacks. The attachment’s filters only work for up to eight to 10 weeks. Though Ecoviate is said to offer a year’s supply of filters starting for $500.

Although it’s not exactly mass-market ready and it adds a few extra steps and expenses to the already busy process of owning and maintaining a vehicle, it is proof that there are solutions for automobile-produced greenhouse gases nearing the future horizon. That said, if these technologies get the boost they need, perhaps, we might not have to rely on the soulless propulsion of electric and hybrid powertrains for the future.