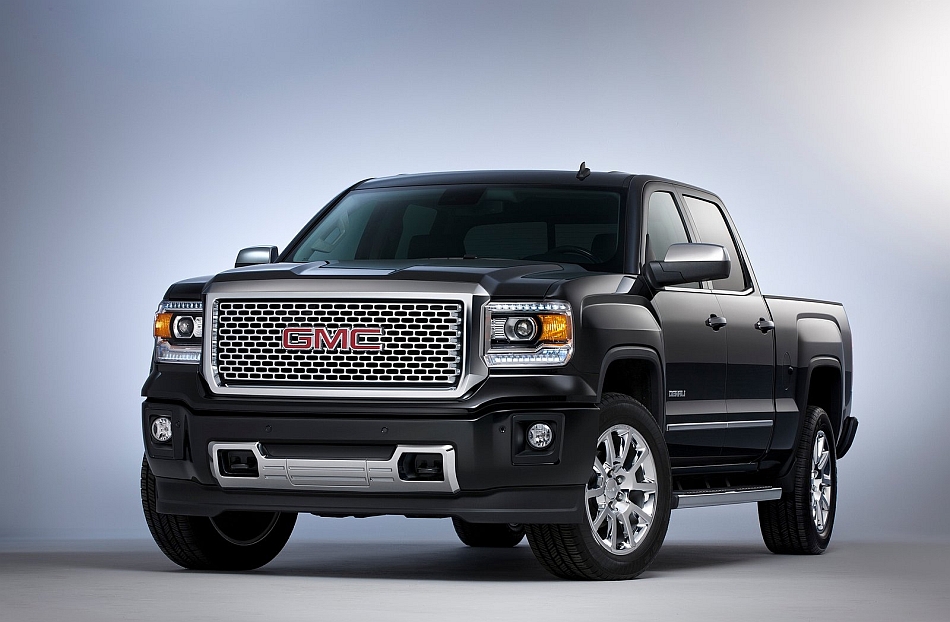 GMC officially unveiled the most expensive version of the latest third-generation line of GM pickup trucks: the all-new 2014 GMC Sierra Denali. This comes after Chevrolet revealed several luxury variants of their lesser, but familial Silverado pickup.

Much like Denali models of the past, the new 2013 GMC Sierra Denali offers a  lot of kit and kaboodle, complete with GM’s all-new 6.2L EcoTec3 V3 good for an estimated 420hp and 450 lb-ft of torque. That also makes it the most powerful light duty truck in its class and capable of towing up to 12,000lbs.

On the inside, GMC tossed in even more high-tech features such as an eight-inch fully customizable infotainment system, Bluetooth connectivity and a total of five standard USB ports. Just don’t try and use the “my phone died” excuse.

The base engine for the Denali still remains the 5.3L EcoTec3 V8, which puts out 355hp and is estimated to return up to 23 mpg on the highway for the two-wheel drive models.

The 2014 GMC Sierra Denali will begin selling at your local dealers this fall with pricing to be announced closer to that date.

A bit gaudy though, ain’t it?

DETROIT – An all-new 2014 Sierra 1500 Denali full-size pickup arrives this fall with an available 6.2L EcoTec3 V-8 that will produce an estimated 420 horsepower and 450 lb-ft of torque, the most power and torque of any light duty truck engine.

Final SAE-rated power and torque numbers will be available later this year. Now entering its third generation, the Sierra Denali is the most luxurious and technologically advanced GMC half-ton pickup.

Sierra’s 6.2L V-8 will also be available for Sierra SLT models this fall. With this engine, the Sierra is expected to have a class-leading maximum trailering capacity of 12,000 pounds. Like every 2014 Sierra, it offers more power and higher expected efficiency than its predecessor thanks to a trio of technologies including direct injection, active fuel management and variable valve timing.

“The 2014 Sierra Denali has a combination of performance, capability and luxury that no other pickup can match,” said Tony DiSalle, vice president of GMC Marketing. “It leaves no boxes unchecked for those owners looking for the ultimate expression of ‘Professional Grade.'”

A 5.3L EcoTec3 V-8 is standard for the 2014 Sierra Denali. It produces 355 horsepower and offers better EPA-estimated fuel economy (23 mpg highway on 2WD models) than any V-8 or turbocharged V-6 pickup on the market.

Standalone options include the 6.2L EcoTec3 V-8, a sunroof and Rear Seat Entertainment.

October 26, 2010 Omar Rana Comments Off on Ford F-Series pickups to show off capabilities at 2010 SEMA Show