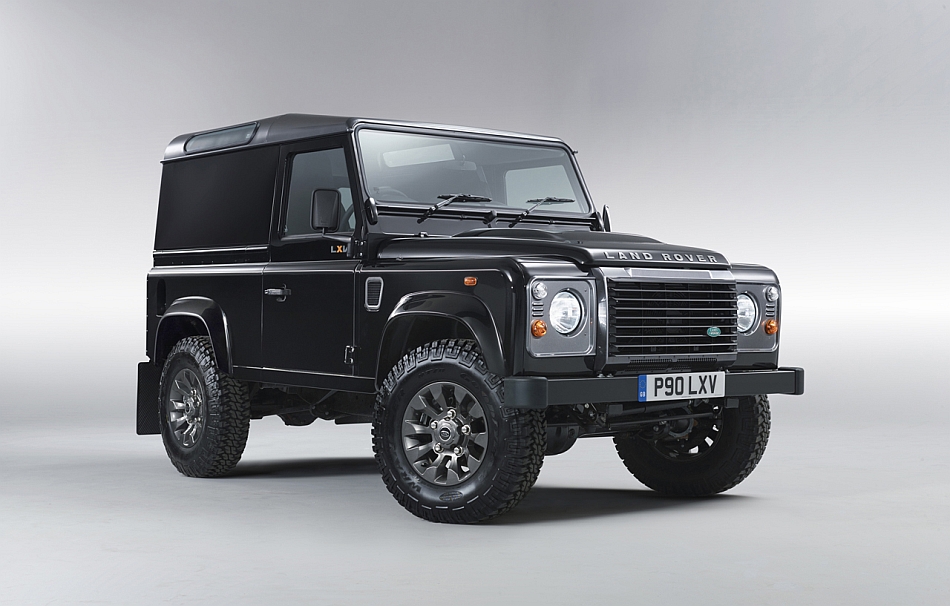 Land Rover has been a staple in the automobile industry for decades and to celebrate, the small British SUV maker unveiled a special edition model commemorating 65 years of technology and innovation on their longest lasting model ever, the Defender off-roader. The roots of the Defender go as far back as the original Land Rover Series I, II, and III, which is fairly obvious given the Defender’s classic design.

That said, it is the bread and butter essence of what Land Rover is, hence the 2013 Defender LXV Special Edition that they just recently introduced. LXV signifies 65 in roman numerals and is equipped with Land Rover’s 2.2L turbodiesel four-banger mated to a six-speed manual transmission.

“Land Rover is celebrating 65 years of proud heritage. It is in fact a dual celebration, as March saw Land Rover deliver the strongest ever monthly and quarterly sales performance in its history,” said Land Rover’s global brand director, John Edwards. “Since 1948, every component in our vehicles has been designed and engineered with intent and Land Rover continues to this day, to build the world’s most capable all-purpose vehicles. A blend of refinement, performance and unmatched all-terrain capability make Land Rover vehicles distinctive and unique, ready to tackle the world’s most challenging and inhospitable terrain.”

The 2013 Land Rover Defender LXV is exclusively available on the short wheelbase Defender 90 and receives the choice of either a Santorini Black or Fuji White exterior, a Corris Grey roof, and various interior accent upgrades along with Special 16-inch Sawtooth wheels.

30 April 2013 — Land Rover marks 65years of technology and innovation with a celebratory event at Packington Estate near its Solihull homeland. A ‘HUE’ birthday cake was flown in by special delivery in a Lynx helicopter by a member of the ‘Black Cats’ Royal Navy display team, renowned for thrilling audiences with their dynamic air displays.

The desire to create a vehicle that will tackle any terrain has been at the forefront of the Land Rover brand since the foundations were first sketched in the sand by Maurice Wilks. This principle has subsequently made Land Rover famous around the world since production began in 1948. ‘HUE 166’ was the very first Series I Land Rover, affectionately known by many as ‘Huey’, and will be on prominent display at the event.

The occasion also set the scene for the debut of a Special Edition Defender – the LXV (65 in roman numerals). Defender evolved from the original Land Rover in 1990 and this iconic family of utility vehicles – Land Rover Series I, II, III and Defender – has now sold in excess of two million units. Available in five different body styles, the LXV is based on the standard Land Rover Defender which is equipped with the 2.2-litre diesel engine and 6-speed manual transmission, producing 122PS@3,500rpm of power and 360Nm@2,000rpm of torque.

This striking Special Edition sports 16-inch Sawtooth alloy wheels and comes in Santorini Black or Fuji White with contrast Corris Grey roof, grille and headlight surrounds and facia. The interior boasts exclusive full leather seats with LXV embossed front headrests and unique orange contrast stitching on the seats, steering wheel and centre cubby compartment to complement exterior LXV decals. An optional union flag decal can be located on the rear of the vehicle. Prices will be available in August.

Around 150 heritage Land Rovers are attending the celebratory event at Packington Estate which was the testing ground for the original 1947-48 Land Rover prototypes through to the Range Rover development vehicles of the late 1960’s and early 70’s. These vehicles showcase key milestones in Land Rover’s 65-year history and also some 4×4 world firsts such as anti-lock brakes, adjustable air suspension, Electronic Traction Control, Hill Descent Control, Terrain Response® and Stop/Start technologies.

The vehicles on display demonstrate Land Rover’s legendary breadth of capability, with ploughing, emergency service, military, expedition, royal and concept vehicles all firmly positioning Land Rover as the world’s most versatile vehicle. They sit alongside Land Rover’s current model line-up – the Defender, Discovery, Freelander, Range Rover, Range Rover Sport and Range Rover Evoque – and include the brand’s latest technological innovations in the form of the new Electric Defender research vehicle and the world’s first 9-speed transmission for a passenger car.

John Edwards, Land Rover’s Global Brand Director says: “Land Rover is celebrating 65 years of proud heritage. It is in fact a dual celebration, as March saw Land Rover deliver the strongest ever monthly and quarterly sales performance in its history.

“Since 1948, every component in our vehicles has been designed and engineered with intent and Land Rover continues to this day, to build the world’s most capable all-purpose vehicles. A blend of refinement, performance and unmatched all-terrain capability make Land Rover vehicles distinctive and unique, ready to tackle the world’s most challenging and inhospitable terrain.”

John Edwards continues: “The all-new Range Rover and Range Rover Sport are the result of unprecedented investment in technology, in engineering and in our manufacturing facilities to produce the world’s first SUVs with a lightweight aluminium body structure. Investing in innovation has always been the lifeblood of Land Rover and we will continue to develop innovative new technology and sustainable motoring solutions for the future, whilst retaining the class-leading and legendary breadth of capability that Land Rover’s heritage is built upon.”