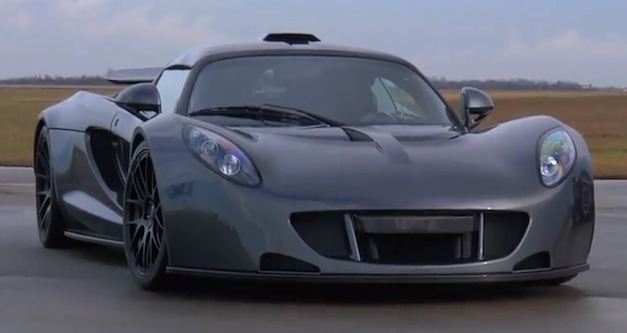 While the rest of the automotive world is shifting towards a more environmentally friendly initiative, we’re happy that there are companies like Hennessey Performance (HPE) out there that still want fast gasoline powered cars out on the road.

The Hennessey Venom GT super recently set a couple of Guinness World Records while undergoing some testing. The car accelerated from 0 to 186 mph in just 13.63 seconds.

“The acceleration time was an average of two runs made in opposite directions within one hour and validated by a VBox 3i GPS-based data logging system,” Hennessey said in a statement. “VBox officials were on hand to certify the numbers as required by Guinness rules. The first run was completed in 13.18 seconds with a 4 mph tailwind. The second run was made in 14.08 seconds while encountering a 6 mph headwind. The resulting two-way 0-300 km/h average was 13.63 seconds”

“We are exceptionally proud of our team at HPE who helped to make this new Guinness World Record possible,” said company founder and president, John Hennessey. “This is just the first of several validation tests designed to show the world what our special car is all about – being the fastest. Period.”

May 28, 2010 Omar Rana Comments Off on Stracke is GM’s new Lutz: Says Z28 coming, Caddy going for BMW, next Camaro to go Alpha

Rumor: A ‘greener’ Ferrari California coming to Paris this month

September 7, 2010 Omar Rana Comments Off on Rumor: A ‘greener’ Ferrari California coming to Paris this month