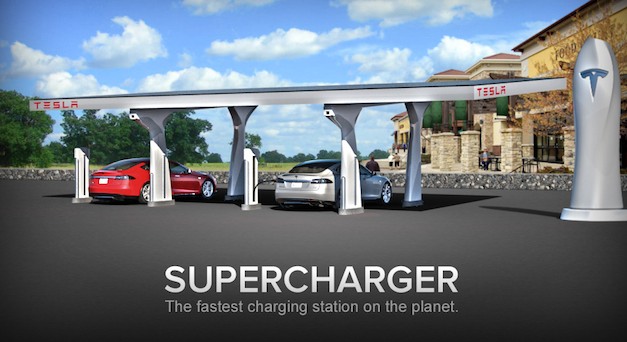 Tesla Motors has just surprised the automotive world by unveiling what it calls a ‘Supercharger network.’ The Tesla Superchargers are basically quick charging stations that will be placed along well-traveled routes in North America – so if you’re one of the many that feared taking a long-trip in your electric-car, it’s time to stop worrying.

Currently there are six active locations with plans for over 100 stations in 2015. Tesla says that the Supercharger stations are designed to give electric-car half a charge in about 30 minutes. That’s 150 miles of range with the company’s 85 kWh battery.

The six locations include California, parts of Nevada and Arizona. By next year, Tesla plans to install Superchargers in high traffic areas across the continental United States, allowing for purely electric travel from Vancouver to San Diego, Miami to Montreal and Los Angeles to New York. Tesla will also start installing Superchargers in Europe and Asia in the second half of 2013.

“Tesla’s Supercharger network is a game changer for electric vehicles, providing long distance travel that has a level of convenience equivalent to gasoline cars for all practical purposes,” said Elon Musk, Tesla Motors co-founder and CEO. “However, by making electric long distance travel at no cost, an impossibility for gasoline cars, Tesla is demonstrating just how fundamentally better electric transport can be. We are giving Model S the ability to drive almost anywhere for free on pure sunlight.”