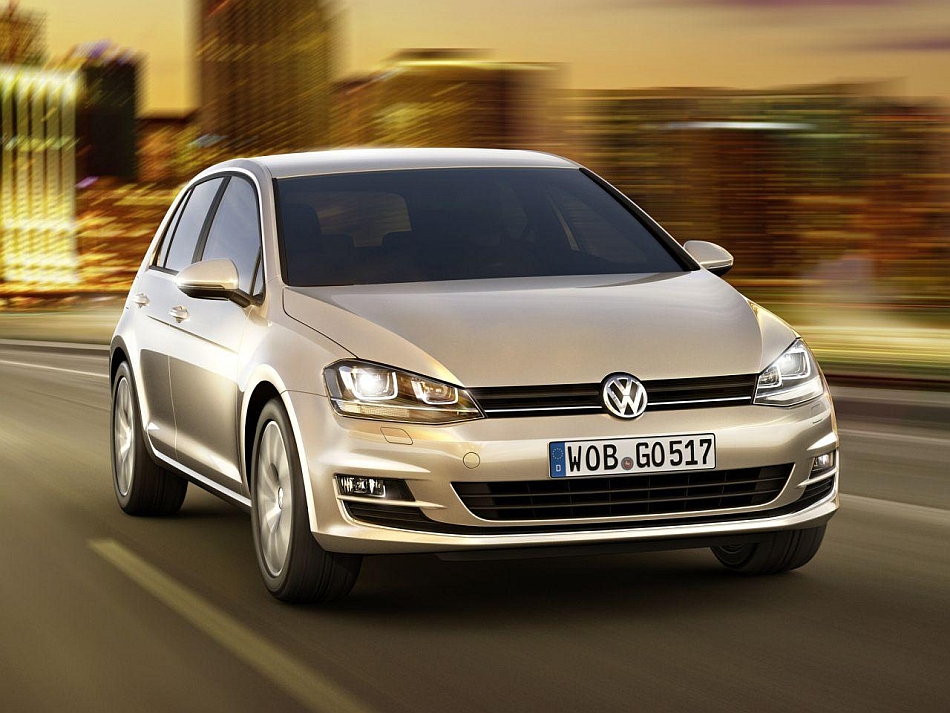 Following the Internet-photo leak of the 2013 Volkswagen Golf MK7/VII, Volkswagen AG full revealed the latest hatch at a press conference in Berlin, Germany yesterday. As usual, the latest Golf totes “more features, even better safety, and more performance than the outgoing vehicle.”

Aiding in all of that was the reduction of 220 lbs when compared to the previous MK6 Golf, thanks to Volkswagen’s latest MQB modular architecture. It doesn’t stop there as a lot of the car’s mechanical bits also received a diet. For instance, the air conditioning compressor weighs a whole six pounds less than the previous generation’s unit—only the Germans would be so precise, yes, but add up all of the pieces that the weigh less and altogether, it makes a difference.

Powering the Golf for the European market is a new base 1.4L TSI turbocharged four-pot good for 140hp that comes complete with cylinder deactivation for a combined European fuel economy rating of 49 mpg. The base diesel engine is an all-new 1.4L TDI Clean Diesel engine, which produces 105hp and returns 62 mpg on the European combined cycle.

Despite the weight loss, the Golf also grows in size. The new Golf MK7 is 2.2 inches longer while the wheelbase grows by 2.3 inches. Additionally, the front wheels were moved forward for sportier proportions and an improved crash structure.

Though despite the full revealing, details surrounding the US-bound version were withheld. Additionally, there was no indication that the US could receive the new base engines showcased with the new Golf.

Herndon, VA – Volkswagen today unveiled the new Golf, its best-selling car, at a press conference in Berlin, Germany. This seventh-generation version of one of the world’s most popular cars is striking in that it offers more features, even better safety, and more performance than the outgoing vehicle, while breaking the cycle of being heavier than its predecessor.

Indeed, the latest Golf is up to 220 pounds lighter than the outgoing car, thanks to careful focus on weight savings in all aspects of the car’s construction, from the electrical architecture through to the engines and the body-in-white. The air conditioning unit is, for example, six pounds lighter than the old car’s; the seats have shed 15 pounds; and the body-in-white is 51 pounds lighter. One major reason for the bodyshell’s weight loss is the extensive use of high- and ultra-high strength steels. The share of the high-strength steels overall has gone from 66 percent in the previous Golf to 80 percent in the new one. Of this, the share of ultra-high-strength steel has gone from six to 28 percent.

One benefit of lowering the Golf’s weight is better fuel economy: the European-market 1.4 TSI® that uses a 140-horsepower, turbocharged, 1.4-liter engine fitted with cylinder de-activation gets a European Cycle combined fuel consumption figure of 49 mpg, while the base 105-horsepower TDI® Clean Diesel engine delivers 62 mpg on the EC combined cycle.

The new Golf is 2.2 inches longer than the old car, with an overall length of 167.5 inches. Similarly, the wheelbase has grown by 2.3 inches to 103.8 inches. Since the front wheels are now located 1.7 inches further forward, the proportions are sportier, the crash structure is improved, and the interior package further optimized. The new car is 0.8 inches lower and 0.5 inches wider than the old car.

The new Golf is more spacious, with a passenger compartment that is 0.6 inches longer than before, giving 0.6 inches more rear kneeroom. Shoulder room is improved by 1.2 inches in both the back and front of the car. Cargo capacity has also been enhanced, while the load area is more accessible.

A key feature of the interior is a new infotainment system, which incorporates a five-inch touchscreen, even on entry-level European models. At the top end, the Golf features a navigation system which has a large, eight-inch touchscreen.