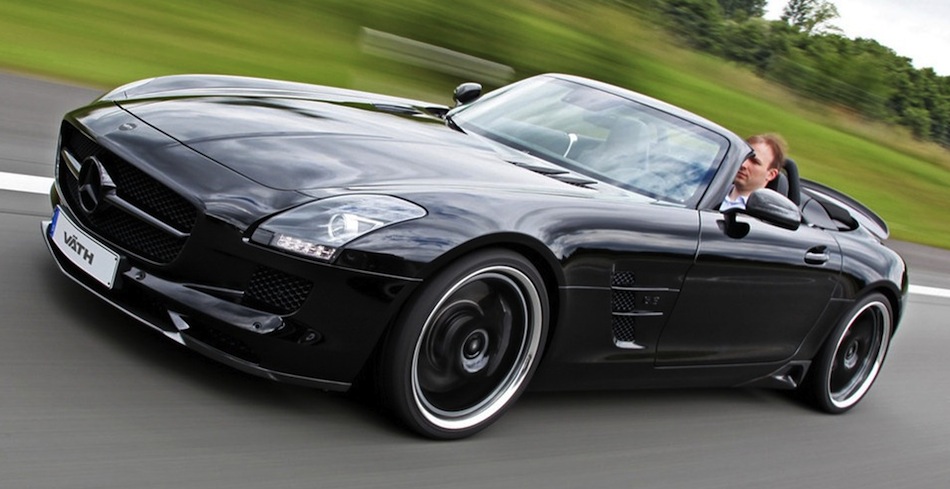 The Bravarian tuners over at Vath have assembled a new kit for the Mercedes-Benz SLS AMG Roadster that concentrates on power upgrades.

Rolling off the assembly line with a 6.2-liter V8 engine, the SLS AMG roadster makes 563 hp and 479 lb-ft of torque. Vath has taken this up to 691 hp and 627 lb-ft of torque with a supercharger kit, upgraded ECU, sports air filter, stainless steel exhaust system and some additional adjustments In the end, Vath shaves off 0.2 seconds from the roadster’s 0-62 mph time, and adds 8 mph to its top speed. The model now goes from 0-62mph in just 3.6 seconds with a top speed of 205 mph.

Vath also made some improvements to the AMG Ride Control system, sports springs and added a high performance braking system.

On the outside, a new boot spoiler, front apron and side skirts were added made of carbon fiber parts, and the whole packages rests on a set of 20-inch alloy wheels wrapped in a set of 265/30-20 sized rubber up front and 315/25-20 at the rear. Topping off the package are interior accents in carbon fiber.

May 29, 2011 Omar Rana Comments Off on MEC Design modified the Mercedes-Benz SLS AMG

13 supercars seized from drivers under 21 in Vancouver, police have no evidence to pursue charges

September 6, 2011 Omar Rana Comments Off on 13 supercars seized from drivers under 21 in Vancouver, police have no evidence to pursue charges