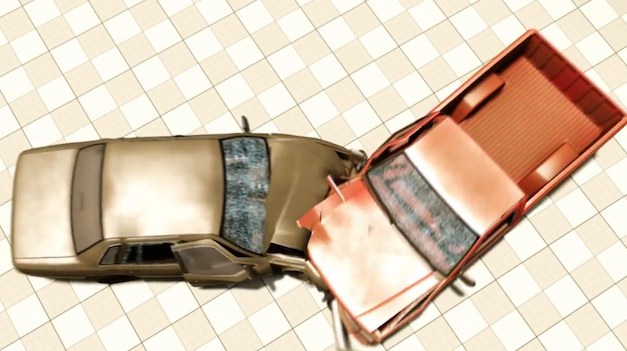 If you’re a videogame nut and a motorhead like I am, then you will enjoy this bit of news. Most of us who are familiar with games such as Gran Turismo for Playstation or Forza Motorsport for XBOX know that it wasn’t until recent that some of the games have been incorporating realistic damage in gameplay in the racing simulators with real cars.

Though vehicle damage itself isn’t new to the videogame world (anyone remember titles such as the Driver and Destruction Derby?), the better vehicle damage physics were left for cars that didn’t exist in real life. And that’s because developers of driving games featured fake cars that were designed in a completely virtual environment from start to finish.

Racing simulator videogames on the other hand, in order to get the most realistic experience possible, would rent actual vehicles and race them around actual closed circuits while recording massive amounts of data using all sorts of telemetry, to mimic a specific car’s personality when handled a certain way. And such research and development has certainly paid off—anyone who is also up to date with the most recent Gran Turismo or Forza Motorsports games will agree that they’re the most realistic they’ve ever been.

Despite their claims to fame for racing simulator realism, both Gran Turismo and Forza still lack truly realistic collision damage in the way that if you were to hit an indestructible tire wall at 180 mph, the most that would happen is the car would go tumbling over it’s own inertia while only scuffing the front bumper or breaking a headlight. And that’s because the only true way for the developers of those games to transpose realistic vehicle damage into the virtual world would be for them to crash each and every car that they added into the game. But considering the hundreds of cars that both Gran Turismo and Forza Motorsports feature, it wouldn’t be financially feasible for them to crash a set of historic Ferraris just so everyone who buys a copy can do so in their living room.

Now though, a new startup developer called BeamNG seems to have the answer. The small startup has been working on a “soft body physics” modification for Cry Engine 3. Cry Engine is the source code, graphics and physics engine produced by developer Crytek, that has provided the backbone for various big-name videogame titles such as the industry-changing Crysis and FarCry first-person shooters.

The team has been working on heir modification for quite some time, and the latest version—shown in the video below—just shows how far they have gotten, or at least how far technology has come. Not to mention, whoever decides to capitalize on BeamNG’s work along with Cry Engine 3 will be the next to dominate the world of driving videogames. Yea, it’s that impressive.