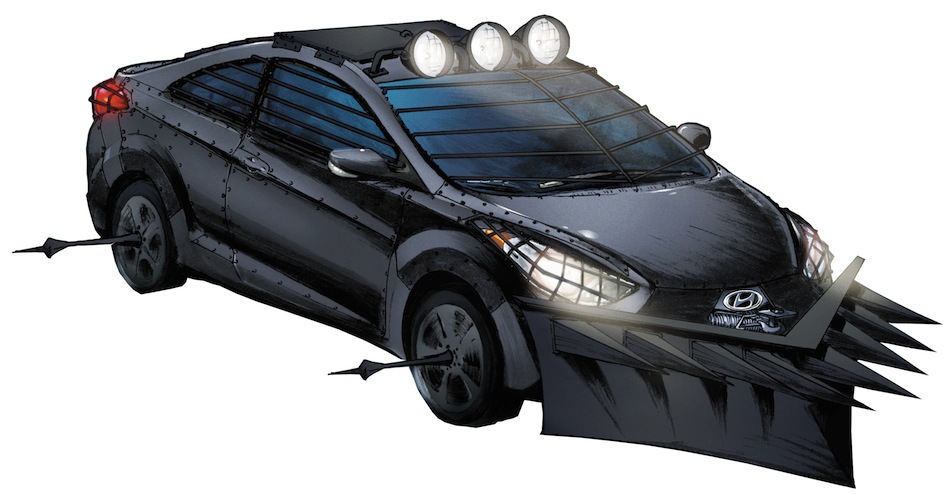 What would be your favorite zombocalypse car? Hyundai is taking a crack at that question with the recent debut of its customized Elantra Coupe Zombie Survival Machine designed by The Walking Dead creator Robert Kirkman and fabricated by Design Craft.

The special-edition custom zombie killing Elantra Coupe was created for the release of the 100th issue of The Walking Dead comic at the Future US booth during Comic-Con International in San Diego this year on July 12-15.

The project, known as the Hyundai Undead, kicked off June 12 with the launch of HyundaiUndead.com and a 4-part behind-the-scenes video series.

“The Hyundai Undead program allows us to interact with hundreds of thousands of film, comic, TV and video game fans during this summer’s ultimate pop culture event,” said Steve Shannon, vice president of Marketing, Hyundai Motor America. “We can’t wait to unveil our custom Elantra Coupe Zombie Survival Machine, the ultimate car for The Walking Dead fans and anyone who wants to survive a zombie apocalypse.”

Kirkman will also be giving away a black 2013 Hyundai Elantra GT wrapped in the cover of the 100th issue of the comic. The sweepstakes launched June 12 and will run until July 31. You can enter the sweepstakes at HyundaiUndead.com.