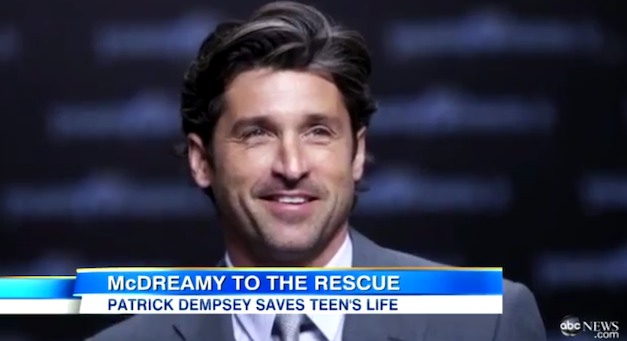 Patrick Dempsey, the Grey’s Anatomy star, can be pretty bad-ass. Besides acting, Dempsey enjoys auto racing in his spare time, having competed in the 24 Hours of Le Mans, Rolex 24 at Daytona sports car race, and Tecate SCORE Baja 1000 off-road race.

Last week, Dempsey came to the rescue of a teen who flipped his Mustang on the road right outside his Malibu home. The actor heard the crash and came running with a crowbar in hand to pry open the doors.

The teen, 17-year Weston Massett, told TMZ when he opened his eyes, the actor was looking down at him. Massett asked if he was famous, to which Dempsey replied “I’m a doctor.”

Dempsey called Massett’s mother and even followed the teenager to the hospital to make sure he was okay.

Video: Fatal crash in South Korea splits Hyundai in half