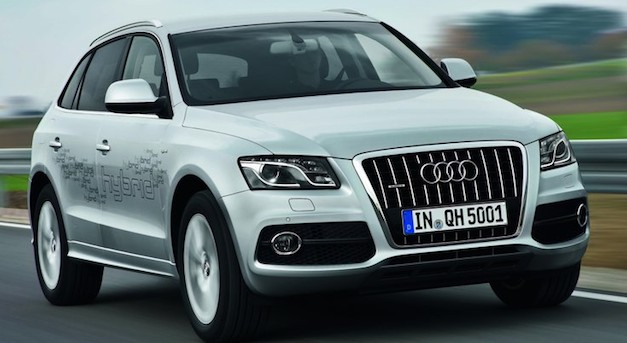 It has recently been confirmed by Audi that the next addition to its U.S. lineup will be the Q5 Hybrid. Already on sale in Europe, the model will be the first hybrid Audi offers in the states.

Power for the Q5 Hybrid will be the same as the standard 2012 Q5, which comes with a 2.0-liter turbo four-cylinder, that puts out 211-hp, with the hybrid clocking in a 0-60 mph time of 7.1 seconds. Where it differs from the standard version is its 54-hp electric motor, which is used mostly for low speeds and starting up the engine, and the eight-speed automatic transmission it has been mated to. Using a multiple clutch system that couples and decouples the electric and petrol motors, the parallel hybrid system also does away with the torque converter for proper operation.

Stored below the rear cargo area with only a minor impact on luggage storage space, the Q5 Hybrid’s lithium-ion battery is capable of independently operating the vehicle up to speeds of 62 mph. The average fuel economy is expected to come in at around 34 mph.

Standard features include navigation, 60 gigabytes of music space and a unique set of 19-inch wheels.

Report: Aston Martin’s Lagonda won’t have an SUV in its lineup