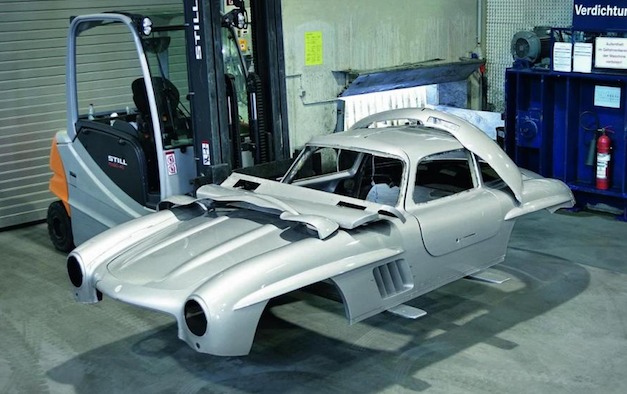 Don’t mess Daimler AG and Mercedes-Benz. The company has shown how tough of a stance it will take if anyone out there tries to infringe their trademarks or design.

A replica of the Mercedes-Benz 300 SL recently tried to clear customs in Germany, however, the vehicle was confiscated by officials and has been destroyed.

Mercedes-Benz Classic has destroyed the replica body of a Mercedes-Benz 300 SL. The courts have ruled that it is not legal to market the body, which was seized by German customs officials.

The body shape of the legendary gullwing model has been trademarked by Daimler AG. Anyone building, offering or selling replicas of the vehicle is in breach of the Company’s rights. This even applies if the replicas do not incorporate any logos or trademarks of the Company. Daimler AG has long taken a tough approach to vehicle replicas.

As a work of applied art, the body of the 300 SL has been under copyright protection for a number of decades. The employees who designed the famous gullwing model in the 1950s granted Daimler AG comprehensive exploitation rights. The body shape has also been trademarked by Daimler AG, as recently confirmed by the Stuttgart regional court (case no. 17 O 304/10, final and binding judgment dated 9 December 2010, following withdrawal of an appeal).

A case had arisen in which a company based in Germany had built an unlawful replica of a Mercedes-Benz 300 SL (W 198 series). The first step in destroying the replica was to separate the chassis from the body. The Mercedes-Benz used-parts centre, which is also responsible for scrapping all Mercedes-Benz prototypes from the development units, then destroyed the body on behalf of Daimler AG. The certified equipment used in the centre includes two presses, each applying over 30 tonnes of pressure. The replica sports car had a fibreglass body weighing precisely 148 kilograms, which the compressor smashed into small pieces. This dramatic end to the unlawful body was officially documented with a signed and stamped ‘confirmation of scrappage’.

The Mercedes-Benz 300 SL (W 198 series) is one of the best known cars in the world. It was launched on the market in 1954 as a coupé with distinctive gullwing doors. In 1999, an international panel of judges voted it ‘sports car of the century’. Today, the original gullwing model and its roadster variant, which was introduced in 1957, are two of the most coveted vehicles on the international classic car scene. All the major car collections worldwide feature the 300 SL – an icon of design and engineering expertise.

Nissan and Daimler to produce engines in North America

January 8, 2012 Omar Rana Comments Off on Nissan and Daimler to produce engines in North America

Report: 91.9 million Americans to hit the roads for the year-end holidays

December 18, 2011 Alexandra Comments Off on Report: 91.9 million Americans to hit the roads for the year-end holidays