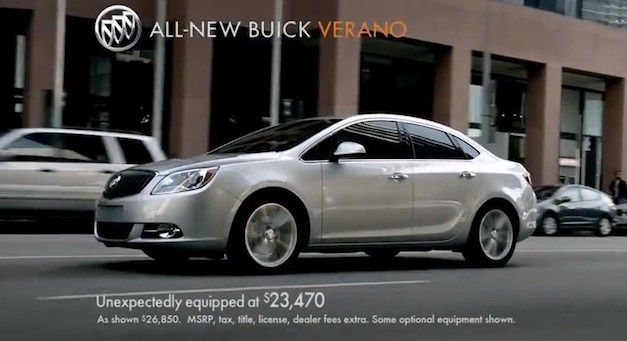 Buick is moving forward with new marking efforts to promoting the Verano, which is already growing in popularity, with a spot on a Celebrity Apprentice episode where teams will compete to make the best consumer launch.

An app has been launched for the episode for viewers in both Android and Apple stores that uses sound activation technology that interact with the episode and ask questions and provide special features throughout the airing.

A sweepstakes entry also comes along with the app with a 2012 Buick Verano as the grand prize, as well as a trip to New York city to see the live finale of Celebrity Apprentice, including a two-night luxury hotel stay and two first-class airline tickets.

Two new commercials will be airing during the episode as well, one that highlights the model’s features, and other that focuses on its QuietTuning technology (check them out after the jump).

While Buick’s overall retail for last month was down by 3.6 percent, the Verano sold 1,688 units, up significantly from December’s 265 figure.

“Already, Verano is building a strong fan base among media and consumers alike,” said Brian Sweeney, U.S. vice president of Buick and GMC Sales and Service. “Early sales momentum shows the desire for Buick’s luxury content and quality in a smaller vehicle.”