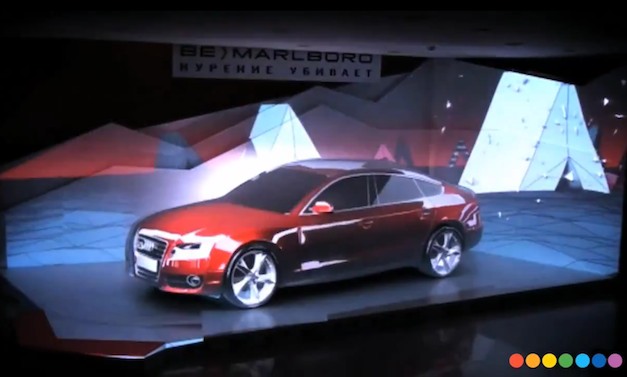 Over in motherland Russia, marketers and advertisers for Marlboro—yes, the American tobacco company—recently pulled an interesting stunt using an Audi and projection mapping. Ok, before I continue, what the heck is that?

Projection mapping is where a series of artists and technicians turn virtually any surface into a projection screen, whether it be two-dimensional or even three.

That said, Radugadesign, a Russian marketing team, took an Audi and put it on a stage where its backdrop wasn’t the only projection screen, the Audi itself was too.

Of course when viewing the ad, some including myself couldn’t help but laugh at the counter intuitiveness of the advertisement. As displayed in the video, Marlboro clearly shows off that smoking is “cool,” something that’s been a heavy topic of debate ever since, well, tobacco existed. And then following the advertisement, a video commenter pointed out that a message was displayed in plain Russian: smoking kills! Gotta love advertising.

Check it out after the jump. Good or bad message aside, the projection mapping result is a very neat performance.