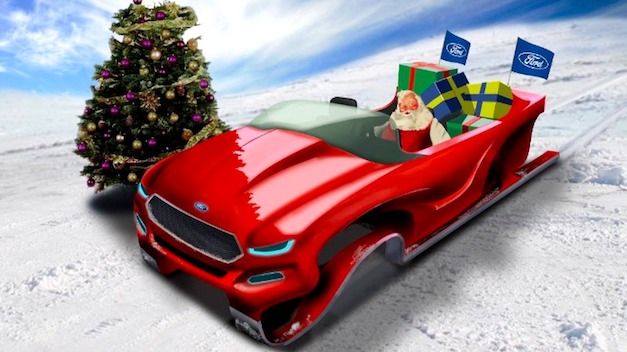 We’ll be taking the day off today for obvious reasons. We wish every reader of egmCarTech Happy Holidays and a very safe and Merry Christmas.

In the mean time, Ford of Europe is helping Santa go green with a new concept sleigh design. Santa if you’re reading, this redesigned Evos Concept-based sleigh is powered by a new 1.0 liter EcoBoost engine that will save you 191,843 tons of CO2 and £110 million ($143 million USD) in fuel costs. It will also allow Rudolph and his buddies to enjoy a well-deserved retirement while Santa makes his annual deliveries with style in an environmentally friendly new sleigh.

“They may look cute, but Santa’s team of nine reindeer create a staggering 214,670 tons of CO2 equivalent emissions each year, so something had to be done to help him re-discover his greener roots2,” said Ford car designer Paul Wraith.

Infiniti Essence Concept to debut in Geneva next month

February 17, 2009 Omar Rana Comments Off on Infiniti Essence Concept to debut in Geneva next month