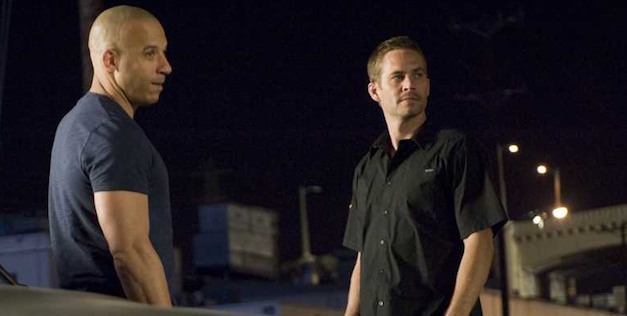 The Fast & Furious epic of vehicular drama is continuing full throttle with the upcoming sixth and seventh both being filmed at the same time.

Film number six has not even begun filming yet, but with complex story line and a growing cast, screen writer Chris Morgan ended up with a 110 page script that, according to main character Vin Diesel, the studio said simply wasn’t going to work in just one movie.

“With the success of this last one,” Diesel told The Hollywood Reporter during a photo shoot, “and the inclusion of so many characters, and the broadening of scope, when we were sitting down to figure out what would fit into the real estate of number six, we didn’t have enough space.”

After pulling down $626 million worldwide at the box office with number 5, there is no surprise that everyone involved in the project has no problem rushing forward. Both sequels may be filmed simultaneously, keeping director Justin Lin on the project, along with signing all the actors up for both six and seven. This should help keep costs down, and with these high-grossing films continually rolling into theatres, bet on seeing even bigger better action, and hotter cars.

The bonus here is that there are whispers that the Autobahn could be making an appearance in the upcoming films, with shooting in Germany. Expect to see Fast & Furious 6 in theatres by May 2013, and the seventh hitting theatres as soon as 2014.