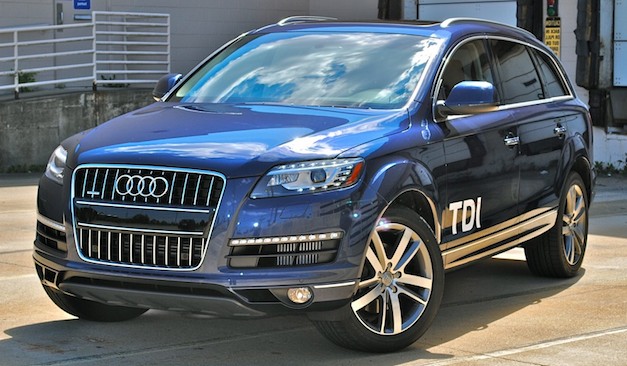 Audi has always been the underdog when it came to comparing their models to standard setters made by BMW and Mercedes-Benz. But over the last decade or so, the Ingolstadt brand has been making a huge statement for themselves. It’s one that tells the world that they’re not to be taken lightly and that other automakers should beware, Audi is here to play the game.

Initially, not all of Audi’s entrances to the luxury segment have been hits and the Audi Q7 full-size crossover SUV is one of them. This is mainly due to the Q7s limited utility ability from its streamlined shape, despite being a sports utility vehicle. Additionally, some call the Audi’s aesthetics controversial, which is something I beg to differ. Either way, to show that Audi is keeping up with the times of weary fuel economy figures, they introduced a new diesel V6 for the US-spec Q7 and they gave us one to see what we think. 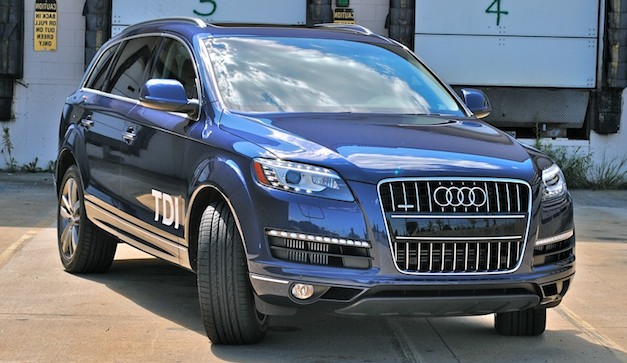 Beginning with these so-called controversial looks, at first glance the Q7 does come off a bit troll-like. But I think it’s rather attractive with its aggressive schnoz and streamlined body. Admittedly, the design takes some getting used to. And if anything, look at it this way: the Q7 does lay to rest any assumptions that SUVs should be a giant big block on wheels.

[quote float=”left”]The Q7 definitely has presence and one that speaks with masculinity and deftness.[/quote] With its upright face, high shoulder line and the long and raked roofline, the Q7 does look like a bit of an estate on stilts. That’s not necessarily a bad thing in my book however.

The Q7 definitely has presence and one that speaks with masculinity and deftness. It gives off a sense of solidity and robustness, something everyone has come to expect from the engineering and design from Germany. It’s clean cut unlike the crease-heavy BMW X5 and the Mercedes ML/GL. And for that, I can appreciate it for the way the Q7 strikes me. 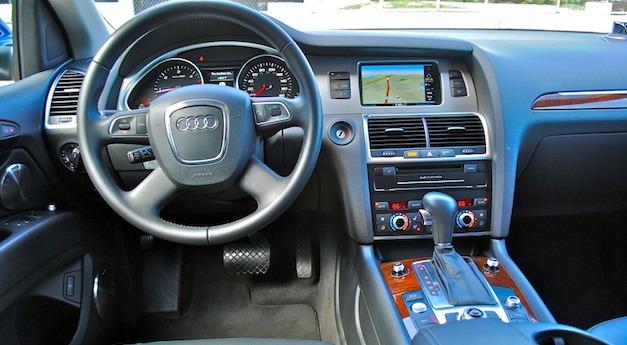 The inside is equally as stoic and Teutonic as expected. Audi’s reputation for stellar build quality and interior design transcends well into the insides of the Q7. Close the door to any of the openings for the Q7 and it responds with the solidity of the brick house-like impression. Sitting in the driver seat is especially rewarding with the driver oriented dash design.

Buttonage is kept to a minimum since majority of the settings are hidden away in a series of submenus on Audi’s MultiMedia Interface infotainment system, which does require some fiddle time.

[quote float=”right”]Sitting in the driver seat is especially rewarding with the driver oriented dash design.[/quote] Speaking of which, our Q7 was equipped with the $6,300 Bang & Olufsen audio system. Mother of God…if you were to put world’s best amphitheater into any car, any Audi combined with the 14-speaker 1000-watt system would be the best example. Audi advertises it as a “virtual concert hall on wheels.” That’s a complete understatement.

The Achilles Heel to the Q7’s interior is its limited interior space, which also makes the Q7 lack a bit behind some of the competition. Because of its streamlined design and low-slung and sloping roofline, interior space is a bit compromised, especially for the third-row where it appeared only pre-teens could sit comfortably. Folding the seats yields more cargo room but much like the Infiniti FX, the roofline still inhibits trunk-hauling capabilities a bit. If interior space is a concern, the Mercedes-Benz GL might be worth the upgrade. 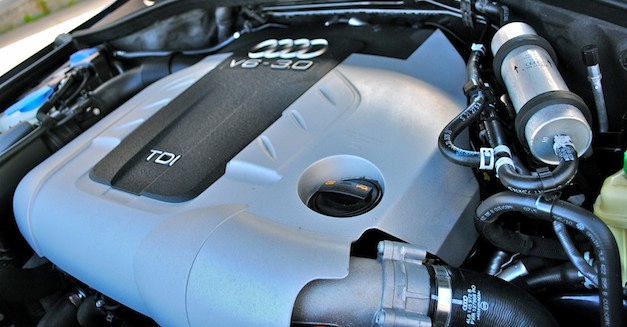 Audi has been one of the forerunners for offering diesel-powered models and this Q7 V6 TDI is no different. As companies slowly market their oil-burners, Audi continues to fare well against the competition.

[quote float=”left”]Arguing numbers aside, nothing can overshadow the fact that this diesel puppy rides on a wave of seamless torque.[/quote] The 3.0L V6 turbodiesel features a commonrail direct fuel injection system with a variable BorgWarner turbocharger. Because it is also one of the few diesels offered in this country, the Q7 TDI uses the “clean diesel technology,” which could be likened to Mercedes-Benz’s BlueTec system where it features a urea-injected catalytic converter that helps make modern diesels cleaner than ever. The result is a segment average 225-hp but a whopping 405 lb-ft of torque. Mated to an eight-speed ZF automatic, the Q7 V6 TDI accelerates to 60 mph in an adequate 8.5 seconds.

So it definitely isn’t as quick as the BMW X5 xDrive35d, which boasts 265-hp and 425 lb-ft. And it’s at least more powerful than the Mercedes-Benz ML/GL350 CDI, which is rated at 210-hp and 400 lb-ft of torque. Arguing numbers aside, nothing can overshadow the fact that this diesel puppy rides on a wave of seamless torque. The engine never feels strained. And in any case, the Audi Q7 V6 TDI hauls ass on the straights. It might not be eclectic like a money-roasting 4.2L V8 previously available on the Q7, but watching the speedo consistently climb has its own merit.

With Audi entirely phasing out the nose-heavy characteristics that defined the brand’s handling characteristics for years, the boffins at Ingolstadt have figured out ways to make their cars handle with balance and unfathomable amounts of grip. Some of these latest examples can inspire more confidence than any other drivetrain layout, making BMW tremble in their shoes. The Audi Q7 is no different. Despite the iron oil-burning six-cylinder lump at front, the Q7 rewards with a very spirited and composed drive. The credit also goes to the Audi’s adaptive air suspension–an option on our top-of-the-line V6 TDI “Prestige.” With six settings of “Lift, Offroad, Comfort, Auto, Dynamic and Cargo,” the suspension gives the Q7 a more versatile feel. Dial into Dynamic mode and the suspension lowers the ride height, firms up the dampers, tightens and weighs up the steering and increases throttle and brake response. The differences between the various modes are noticeable. In general, the steering is light on feel due to its AWDness, but what other competitor in this segment really isn’t? If anything, the BMW has the upper hand on steering feel. Accuracy and weighting is up with the best in this segment in any mode.

Ride quality is also something that lives up to the premium German expectations. It is firm and can tend to “crash” a bit on the bigger imperfections. But this can be partially explained by our tester coming equipped with 20-inch alloys. Like the other competitors in this segment, highway cruising is nothing but a breeze, thanks to the standards of the Autobahn. But if I were to point out discernable differences between the competitors, the crisp responses of the chassis, suspension and the well-damped road noises make the Audi Q7 in a class between the Mercedes-Benz GL/ML and the BMW X5. 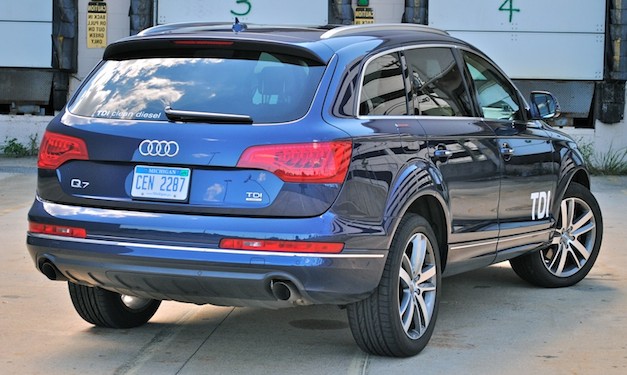 And to be honest, nearly all of the options in this segment are special in their own way. What matters is that they all master the basic recipe for a luxury full-sizer and each and every option caters to a particular taste. Much like some of egmCarTech’s staff, majority of the buyers in this segment would have the BMW X5 for its bias towards performance. Those looking for a more luxurious experience, like myself, would go for the Mercedes-Benz GL350, which has the best ride out of any of its competitors. As for the Range Rover Sport, it should be noted for not offering a diesel option in this country so in a comparison of diesels, it would be ruled out. None of the American or Japanese alternatives offer diesels either, so we’re left with the Germans battling against each other. And no matter which way you go in this particular segment, the Audi Q7 should at least be on your list for consideration.