GM executives are taking advantage of the opportunity to purchase the brand’s stocks.

Dan Akerson, General Motors Co. Chairman and CEO used his personal finances to purchase 10,000 shares Tuesday, which is also the first day they were available to insiders. This makes a total of 103,600 GM shares for the CEO. Renee Rashid-Merem, spokeswoman, says picking up the shares reflects his confidence in the company, saying “He clearly sees the company is going in the right direction, and he’s demonstrated that through his personal action.”

Paid in cash, long-term incentive pay, and stock, Akerson’s yearly salary totals $9 million. Another 500 shares were also picked up by GM vice president Timothy Lee on Tuesday, as well. Still, 500 million shares are held by the government, which equates to a 26% stake in the automotive brand. The recent decline in prices would mean a $14 billion loss, so it is not likely they will be selling any time soon.

GM insiders are privy to purchases through the end of August.

GM CEO fed up with Opel, reviewing options on what to do with the brand

June 10, 2011 Omar Rana Comments Off on GM CEO fed up with Opel, reviewing options on what to do with the brand 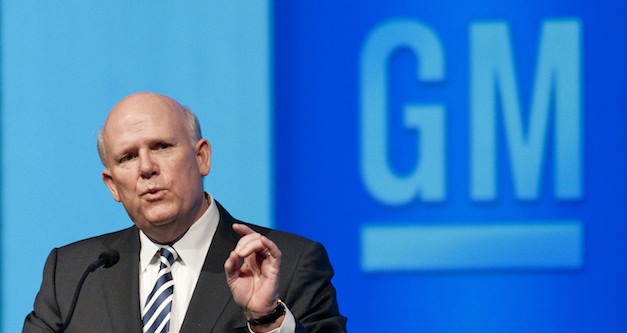 GM CEO: Government looking into when to sell remaining shares

April 20, 2011 Omar Rana Comments Off on GM CEO: Government looking into when to sell remaining shares