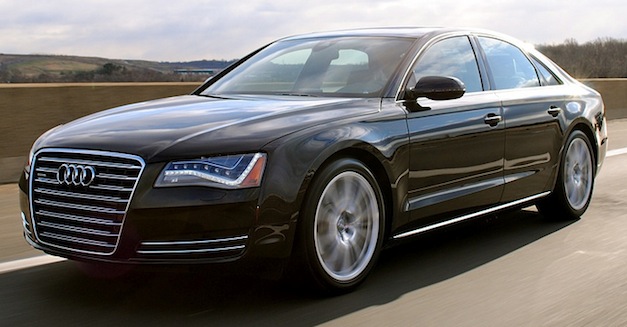 When you translate Audi’s German slogan Vorsprung durch Technick , you’ll find out that means Progress Through Technology (the U.S. slogan is simply Truth in Engineering) and that is exactly what the new 2011 Audi A8 is all about.

In fact, it may be too much engineering for many of us to comprehend, so I’m here to dumb it down for you…kind of. Of course, it will be tough because when a car like the A8 is on the table for discussion, you’ll have to mention things like the light aluminum Audi Space Frame architecture. You can’t skip it’s highly efficient and powerful engine and transmission. Time has to be spent on the improved MMI control system featuring a number of innovations. It’s also imperative to mention the Quattro all-wheel drive and adaptive air suspension. And let’s not leave out its elegant interior with a craftsman’s level of fit and finish with wood, metal and Alcantara trims.

Yes, the Audi A8 is definitely fascinating when it comes to engineering and innovation. But how is it as a full-size luxury sedan for those that have over $80,000 to spend? More importantly, will they have any fun doing it? Or are the A8 fans a different kind of crowd? 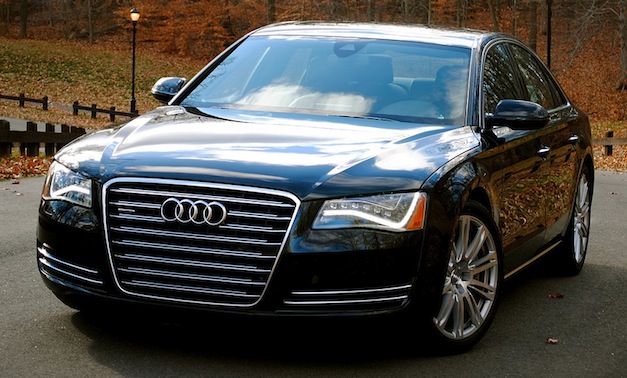 [quote float=”left”]…you’ll notice how gigantic the grille is compared to its competitors or how the headlamps just seem to stare into your soul.[/quote] The new 2011 Audi A8 is definitely a looker, but is it good looking? At first, when we here at egmCarTech saw photos of the new 2011 Audi A8, they left us on the fence. However, when we finally picked it up for a week long test drive, we noticed that it commanded so much attention.

Park the new Audi A8 next to the Mercedes-Benz S-Class, BMW 7-Series or the Lexus LS, and you’ll notice how gigantic the grille is compared to its competitors or how the headlamps just seem to stare into your soul. It’s not to say that any of these full-sized luxury sedans are better looking than the other – together they are like a lineup of slightly different looking beautiful women.

To get a little technical: Since we are talking about the Progress Through Engineering brand here let’s bring out the numbers and facts. The 2011 Audi A8 is actually shorter than most of its competitors in both length and wheelbase but seems to offer more legroom. It’s shorter in height too, yet seems to have more headroom. One thing it has its competitors beat on is width. As the widest of the bunch, the 2011 Audi A8 offers plenty of hip room and comfort for its passengers. Here’s a chart that Audi complied for our technically inclined readers:

When it comes time to hit the scale, the 2011 Audi A8 ends up weighing less than most of its competitors. That is attributed to the body of the A8, which is made of an aluminum Audi Space Frame (ASF) that weighs about 40 percent less than the comparable steel structure.

When talking about the exterior of an Audi, it is very difficult not the mention the headlights. Even the new full LED headlights of the 2011 Audi A8 “herald a new chapter in history of lighting technology.”

“They give the luxury sedan an unmistakable appearance even in daylight and even more so after the fall of darkness,” Audi says. “The revolutionary optics used in these headlights means a departure from the tubular light modules commonly used today.”

Could this be any grander, ladies and gentlemen? 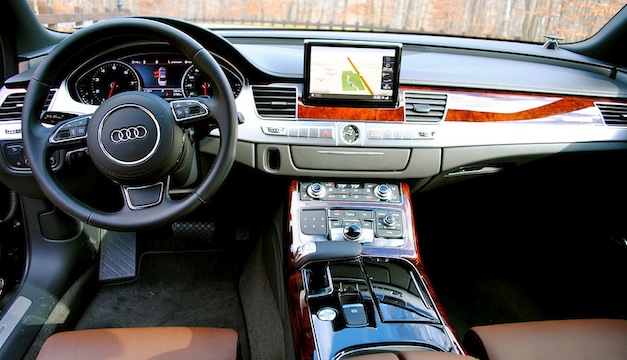 Sit inside the new 2011 Audi A8, and you’ll be lost for hours, maybe even days. There is so much to do inside the car that you will find yourself in the maze of its Vorsprung durch Technik world.

Just to list a few of the things I came across in my week-long review:

Time to get a little technical, again: Audi says the interior design focus is on a part of the car called the “Koenigsfuge”, which is where the door and the dashboard meet.

[quote float=”left”]There is so much to do inside the car that you will find yourself in the maze of its Vorsprung durch Technik world.[/quote] “Four different materials and design lines meet at this join (wood inlay, aluminum inlay, leather dash, and plastics) and must line up on the door and the dashboard for the interior dsign to flow around th passengers,” Audi says. “A compromised solution could have been to change the desing to simplify manufacturing, but Audi showcases its quality in the A8 in many such ways.”

Precisely. That is of great importance. Good thinking, Audi. 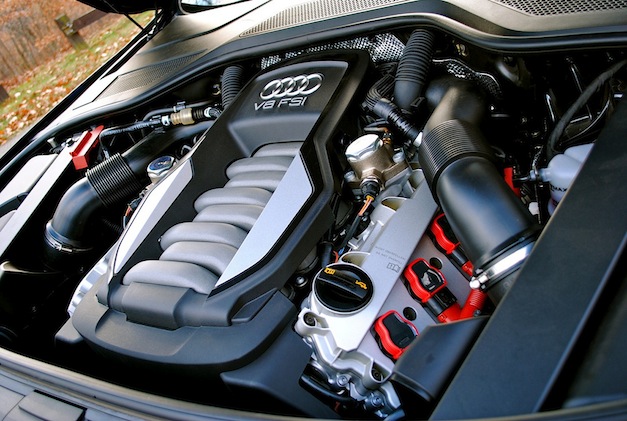 You’re probably wondering – “All that technology is definitely nice, but how is the comfort and ride?” The ride of the 2011 Audi A8 is very smooth and very comfortable. Rear passengers will enjoy bountiful space to stretch (Audi A8L offers 5-extra inches), while driver will enjoy a V8 and an 8-speed transmission.

Time to get technical, again: Mated to an 8-speed automatic transmission along with Audi’s Valvelift System (AVS) providing variable intake valve lift, the A8 gets better fuel-economy than most of its competitors. And if you just so happen to be a little unruly and drive a touch on the side of sporty, the latest-generation Quattro all-wheel drive system comes with asymmetric rear-biased torque split; meaning you’ll get slightly more spirited driving that you wouldn’t probably expect from an all-wheel-drive full-size sedan. 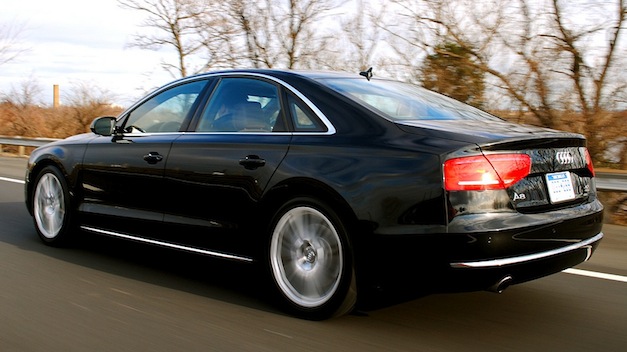 “A8 customers are highly affluent consumers with a median income close to $500,000, and are most likely worth over $1,000,000. Their median age is around 58 and they are highly educated, with almost half having a post-graduate level degree, and are mostly married with few children still in the household. They enjoy traveling, both domestic (e.g. skiing/spa) and international (e.g. Italy, France). Typical publications that they enjoy include the Wall Street Journal, the New York Times, The Economist and Barron’s.”

For those that fit into that mold but want to squeeze in a drop of rebellion while sparing a touch of practicality and sensibility – well, there’s always the BMW 760i and the Mercedes-Benz S63 AMG. We’re eagerly awaiting the arrival of the next-generation Audi S8 as well.