Sir Stirling Moss is one of the greatest, go-fast men in automotive history. In fact, his driving career with Aston Martin saw him drive a number of the company’s racing cars including the famous DB3S and DBR1 models with great success – so why would he purchase the new Toyota iQ based Aston Martin Cygnet? Well, because it’s not really for him.

“One of the closest teams in motorsport for many years, Sir Stirling and Lady Moss planned a private celebratory dinner on the eve of her birthday at the Royal Automobile Club in its clubhouse the century old, ‘palace on Pall Mall’ in London,” Aston Martin said in a statement. “On arrival they were met with the sight of the new Aston Martin Cygnet on display in the magnificent central rotunda – the culmination of six months planning and ‘secret’ correspondence between Sir Stirling and Aston Martin to plan a surprise birthday present for Lady Moss.”

Sir Stirling Moss said: “My greatest partner in everything that I do, Susie is an amazing person and frankly the best wife a man could have. Since seeing a pre-production Cygnet in January I knew that it was the perfect car for Susie; a proper little piece of British luxury and perfect for our life in town.”

On a side note: We also found out that building a Cygnet takes 150 hours to complete. 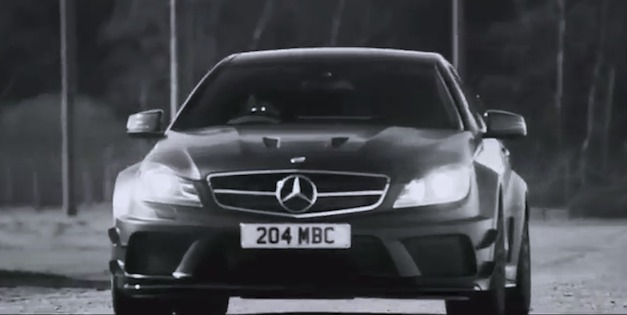 Video: Mercedes-Benz shows the dark side of the C63 AMG Coupe Black Series

May 9, 2012 Omar Rana Comments Off on Video: Mercedes-Benz shows the dark side of the C63 AMG Coupe Black Series