The Chevrolet Corvette is one of the most iconic sports cars in history and has spawned a large number of custom-built examples based on their platforms over the years. Such instances from coachbuilders include the likes of the Callaway C12, the Rossi SixtySix, the Genadi LSR Roadster, and the Soleil Anadi. Now, you can add another to the list.

Endora Cars based in Germany took a basic Corvette C6 and gave it some unique bodywork inspired by American and European sports cars from the 1960s and 1970s. It certainly looks like something to come out of Hot Wheels studios, much like that Mercedes-Benz Aria Concept.

Dubbed, the SC-1, it will be available in three configurations. The base model will receive GM’s LS3 6.3L V8 good for 437-hp and 424 lb-ft of torques. Next is GM’s LS7 7.0L V8—found in the current Z06—which churns out 512-hp and 470 lb-ft of torque with the top of the range being GM’s supercharged LS9 6.2L V8, the same from the Corvette ZR1, good for 647-hp and 604 lb-ft. All configurations are mated to a six-speed manual cog swapper with a six-speed auto with paddle shifters as an option on only the base model. Electronic traction control and GM’s own Active Handling-System will be included on the Endora as well as 19-inch alloys up front with 20-inchers in the rear.

Other details such as pricing and availability will be announced later on.

Check out the press talk after the jump along with the high-res gallery.

MUNICH – Presenting the brand-new SC-1 Endora-Cars® Germany proves what might be the best synergy of dynamic, elegance, individualism and lifestyle yet.

Dynamicly flowing body lines, a sporty sketched silhouette with a distinctive swing – the SC-1 picks up the looks and values of contemporary american and european Sports Cars once built in the sixties and early seventies and skillfully reinterprets it into the presence.

In its body shape the SC-1 among other things looks about the concept cars once built in the fifties, sixties and early seventies. Modern and timely interpreted without being too „retro” the SC-1 stands out due to its sharply patered front, holding high-intensity-discharge headlamps and LED-fog lights, a long engine hood, an upward designed belt line including a dynamicly shaped swing and a flowing rear end mit its extremly horizontally positioned back window.

The rear of the SC-1 houses two LED-taillights, optically accentuated through the black body part on which they were positioned. Below the beltline one can find an also black painted diffusor that contains the back-up- and fog-lamps.

A very special design cue is found on the side of the SC-1: Here a part of the body is formed in a contrasting color that somehow reminds of a design detail used on the classic sportscars once built in the fifties.

An amply dimensioned front spoiler not only lets the SC-1 be visually more to the ground, but also delivers a better compacting pressure to the front axle. Under consideration of all these details the car forms a harmonically designed, almost breath-taking entity. Uniqueness and polarization has a name – Endora SC-1.

Under its flowing body lines SC-1-owners can trust on the modern technology of the current sixth generation of the Corvette. Therefore customers will get their Coupé equipped with a 6.2 Liter/376 ci Aluminum-V8 (437 hp, 424 lb-ft) already as the basic configuration. The second step in matters of power would be another eight cylinder, this time developing 512 hp and 470 lb-ft of torque out of its 7.0 Liter/437 ci engine. The top-of-the-line model will feature a supercharged version of the 6.2 Liter/376 ci V8, that will deliver an impressive 647 hp and 604 lb-ft of torque to the rear axle. Every engine is mated to a six-speed-manual gearbox, while an automatic transmission mit six gears and paddleshift is optional for the smallest V8.

The burned gasoline will be removed by sidepipes that end directly prior the rear wheel openings. The suspension of the SC-1 consists of cast aluminum upper and lower control arms, transverse-mounted composite leaf springs and monotube shock absorbers on all four ends. An electronic traction control is as standard as the Active Handling-system that monitors the driving dynamics. All Endora SC-1 will be delivered with 19 inch alloy wheels in the front and 20 inch rims in the back. As an option there will be 20 and 21 inch rims available.

March 9, 2010 Omar Rana Comments Off on Mazda’s design chief’s pet project is the next RX-8

Report: Infiniti Emerg-E will not be entering production, will influence future models 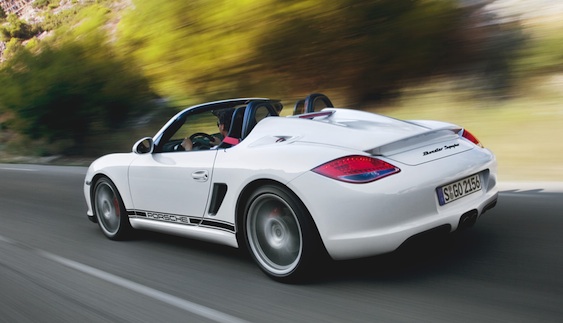