Bugatti has just released two new versions of the Veyron at the Shanghai Motor Show this week for the Asian markets.

The special edition Grand Sport version with the chop top targa roof was given a special color scheme to differentiate itself from other versions offered in wither the European or American markets. It consists of a matte white paintjob with blue carbon fiber on the lower fenders. The interior receives a similar treatment to the exterior with blue materials and white stitching where applicable.

The second is a Veyron Super Sport, also given special color schemes to equally rarify itself from the others. That receives a black lacquered carbon fiber and cream interior with a black matte exterior.

Molsheim/Shanghai, 19 April 2011 – Bugatti creates top-rate performing sports cars that are so unique in design and technique that they have been named pieces of art. The two latest masterpieces by this legendary European manufacturer will be on display at the Auto Shanghai 2011, an Asian debut for the Bugatti Veyron 16.4 Super Sport. The Super Sport ranks as the highest performing car in existence with 882 kW (1,200 PS) and an electronically limited top speed of 415 km/h. The Bugatti Veyron 16.4 Grand Sport, whose 736 kW (1,001 PS) makes it the most powerful convertible in the world, will also be showcased by the Alsace-based luxury brand in Shanghai. But today’s Bugattis are more than the ultimate sports cars – the Veyron 16.4 has already become an exclusive collector’s item and a prized investment.

A special edition Grand Sport for the Auto Shanghai 2011

The Bugatti Veyron 16.4 Grand Sport will be unveiled in Shanghai is finished in matte white, with the same tone on the roof’s prominent air intakes. Blue carbon elements on the vehicle’s lower section and blue finished alloy wheels in form a striking contrast. The blue color also dominates the super car’s interior, set off to perfection by white stitching on seats, steering wheel and gear lever and an aluminum console. This vehicle has been specially built by the

“This Grand Sport is an example of the versatile possibilities customers have when designing their unique Grand Sport in co-operation with the Bugatti team”, explained the President of Bugatti Wolfgang Dürheimer at the Auto Shanghai. “We will continue to expand the design possibilities for the Bugatti brand.”

The Bugatti Veyron 16.4 Grand Sport is the most powerful and fastest convertible in the world today. Just the three telling figures 736 kW (1,001 PS), 1,250 Nm torque and a top speed of 407 km/h (limited) make it clear that amongst convertibles this car is truly in a league of its own. When opened to the skies, the Bugatti Veyron 16.4 Grand Sport reaches top speeds of 360 km/h leaving other convertibles standing in its dust.

Accompanying the sheer thrill of driving with the top down is a quite extraordinary sonorous roar that no other automobile can match. The sounds of the 16-cylinder mid-mounted engine and the unmistakably intense inhalation from the air intakes as you release the accelerator forge an inimitable acoustic experience.

And should rain clouds appear, a textile canopy that is stowed in the trunk and functions in the same way as an umbrella can be fitted before the first drops fall. This soft top for passing showers remains securely in place up to 160 km/h. But with the transparent polycarbonate roof module back in place, the Grand Sport goes right on accelerating all the way to 407 km/h.

The Bugatti Veyron 16.4 Super Sport presented in Shanghai comes completely in black visible carbon carbon. The details in the polished and anodized aluminum set an excellent contrast as the outer surfaces of the alloy wheels and the EB logos on wheel caps, fuel filler cap and rear lid. The interior of the Super Sport is draped in two-tone “Snow Beige” and “Beluga Black”. Carbon continues as a defining theme in the inside, sheathing the doors and inset in the central console. The rest is in highly exclusive “Snow Beige” leather. The Bugatti Veyron 16.4 Super Sport shown in Shanghai has already been sold to a customer in China.

The Bugatti Veyron 16.4 Super Sport is the fastest car worldwide

The Super Sport is based on the classic Veyron 16.4 but with an output of 882 kW (1,200 PS) is 146 kW (200 PS) more powerful. Bugatti pilote officiel Pierre-Henri Raphanel last year set a new world speed record for production vehicles on the Volkswagen test track in Ehra Lessien, achieving 431 km/h and an entry into the Guinness Book of Records. The production version is electronically limited to 415 km/h to protect the tires.

The power development of the 7,993 cm3 capacity 16-cylinder engine is made possible by the four enlarged turbochargers and intercoolers. The chassis has also been extensively redesigned, in order to handle the car’s extreme dynamism with safety. With lateral acceleration of up to 1.4 g, the improved interaction between the tyres and the intelligent all-wheel drive system enables perfect handling. At the same time all powertrain components have also been comprehensively reinforced, to transfer the acceleration of up to 1,500 Nm safely to all four drive wheels.

Instead of the air intakes above the engine, fresh air is fed in via two NACA ducts set into the roof. The Super Sport’s front view is characterized by expanded, reshaped air intakes, with the lower one extending around the sides to the wheel arch to lend this supreme sports car an even more assured appearance. Meanwhile at the rear the Super Sport features a revised rear panel arrangement and engine cover, a new double diffuser and a centrally arranged exhaust system with two broad chrome exhaust tips. The modified rear and the redesigned roof both enhance the aerodynamics of this quintessential Bugatti. 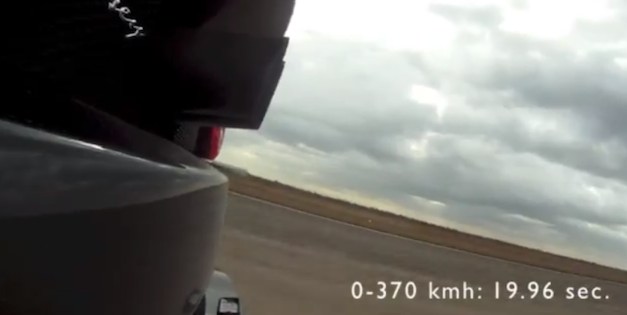 December 5, 2012 Omar Rana Comments Off on Video: Hennessey Venom GT accelerates from 0 to 230 mph in 20 seconds

Rent a Ferrari for $8 an hour through Jointli

December 4, 2011 Alexandra Comments Off on Rent a Ferrari for $8 an hour through Jointli