American Suzuki Corporation has just unveiled a turbo concept of its Kizashi sport sedan earlier today at the 2011 New York Auto Show suggesting that the company could be planning a new model that could cater to enthusiasts in the US of A that crave added power and performance.

The turbocharged Kizashi Apex Concept features a new Garrett turbocharger complete with an air-to-liquid intercooler, electronic boost control, and a reworked engine ECU. The result is, as near as makes no difference, approximately 275-300 hp from about a maximum of 8.5 psi.

On the outside, the Kizashi Apex Concept receives a livery that’s inspired by Suzuki’s tradition in motorcycle racing as well as a revised lower front fascia featuring LED-based foglights. Complete with special performance tires by Yokohama that feature an adfacned nanotechnology micro-fiber compound that maximizes traction in both wet and dry conditions, the Apex Concept certainly looks like a promising entry into the market that if made, could make Suzuki a viable alternative to other cars in the same market.

“Our turbo-equipped concept leverages the already-exceptional Kizashi platform and infuses it with a substantial boost,” said Steve Younan, director of automotive marketing and product planning, American Suzuki Motor Corporation. “The Kizashi Apex Concept will further elevate our flagship sedan in the U.S. among enthusiasts who crave added power and performance.”

More Power Under the Hood

The Kizashi Apex Concept features a Garrett turbocharger, an air-to-liquid intercooler, electronic boost control, and a specific engine control unit calibration to provide outstanding drivability. The system takes the Kizashi’s peak output into the 275-300 horsepower range, with a maximum boost of 8.5 psi. This powertrain is matched exclusively to a six-speed manual transmission. Specific system components are as follows:

Key to the Kizashi Apex Concept’s performance is its air-to-liquid intercooler, purposed for more effective charge air cooling in a smaller package. The unit’s relatively small heat exchanger and circulation pump are designed to be minimally intrusive to vehicle cooling. The intercooler’s primary advantage comes from the reduction in the overall length of ducting, which results in faster throttle response and a lower turbo lag, giving peak boost faster than most air-to-air intercooler systems. For impressive engine

The livery on the Kizashi Apex Concept is based on the actual Suzuki superbike race design theme and highlights the vehicle’s bloodline connection to Suzuki’s GSX-R Superbike. For a more expressive front-end, the lower fascia wears customized LED-based foglights. The Apex Concept is shod with Yokohama S.Drive 245/35-R19 tires, featuring advanced nanotechnology micro-fiber compound to maximize traction in both wet and dry conditions. The wheels are lightweight performance alloys with a “burnt asphalt” finish to communicate this Kizashi turbo’s high level of performance. To make sure all this power is put to use in the right place, the Kizashi Apex Concept uses Suzuki’s Euro-spec high intensity discharge (HID) headlamps. 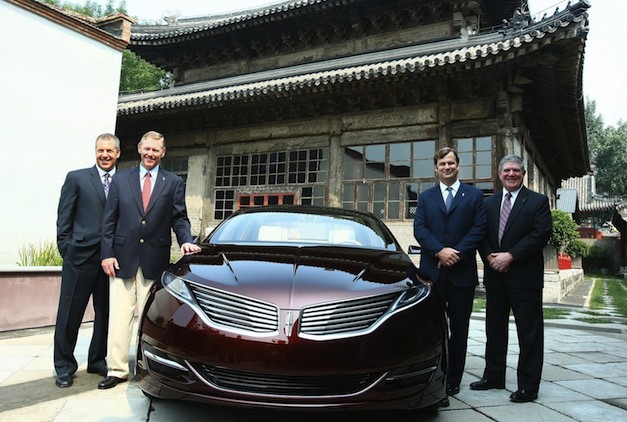 Lincoln coming to China in 2014