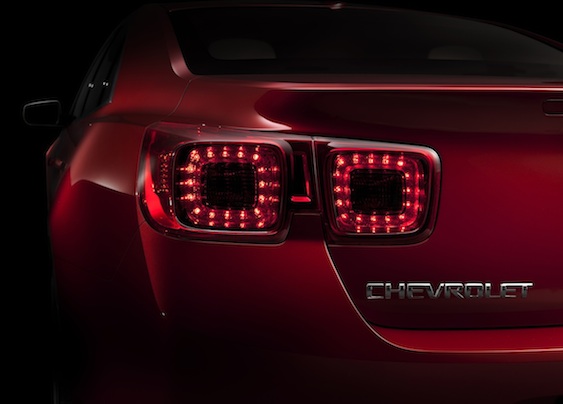 Finally, General Motors has started giving us some information on the eighth-generation Chevrolet Malibu. The 2013 Chevrolet Malibu, which will debut at the 2011 Shanghai Motor Show next month… wait… Shanghai? Why not the 2011 New York Auto Show. Well, GM will be using an international launch for the all-American Malibu because the car will be sold in nearly 100 countries on six continents.

“This Malibu takes Chevrolet’s established and award-winning nameplate to new places and introduces it to new audiences around the world,” said Rick Scheidt, vice president of Chevrolet. “Whether the Malibu is sold in North America, South America, Europe, Asia, Africa, or Australia, it has been engineered from the ground up to meet the needs of customers around the world.”

According to Dan Gifford, the exterior designer on the 2013 Chevrolet Malibu, design wise, the new sedan had to be more athletic and more aggressive than before to appeal to a broader range of people. Some of the cues and DNA was borrowed from Chevy’s performance vehicles including the Camaro and the Corvette.

You can see the new 2013 Chevrolet Malibu be unveiled live on April 18 at 8:30 pm EDT on www.facebook.com/chevrolet. Stay tuned.

Hit the jump for the teaser video for a closer look.

DETROIT/SHANGHAI – The all-new Malibu will transcend time zones and embrace the diversity of cultures around the world when Chevrolet simultaneously unveils it live at the Shanghai Auto Show and on Chevrolet’s Facebook page.

Chevrolet provided a sneak peak glimpse  today of its Malibu show car. Chevrolet will unveil the new Malibu live starting at 8:30 p.m. EDT on April 18 at http://www.facebook.com/chevrolet. The Web reveal will also be streamed live on iPad and iPhone mobile devices.

Consumers are encouraged to post questions during the reveal on Twitter using #MalibuReveal or on Chevrolet’s Facebook page in the Malibu tab. Members of the Chevrolet team will be on hand to answer questions during a live moderated question-and-answer session following the web reveal.

The timing of the Web reveal coincides with the April 19 auto show debut of the new Malibu in Shanghai. The Malibu show car will also be shown at the New York International Auto Show, which is open to the public April 23 through May 1.

The Malibu will feature a global family of fuel-efficient and powerful four-cylinder engines, along with six-speed transmissions that also contribute to efficient performance. The Malibu was designed to stand out in all markets around the globe, while its European-inspired driving characteristics were engineered to challenge the best in its class. The new Malibu is Chevrolet’s first midsize car to be sold globally. It will be sold in nearly 100 countries on six continents and built in multiple locations, including China and two facilities in the United States.

“We look forward to offering the new Malibu to our customers across China,” said Kevin Wale, president and managing director of the GM China Group. “The Malibu fully embodies Chevrolet’s tradition of dynamic styling, superior handling and outstanding fuel efficiency. It will address growing domestic demand in the upper-medium segment, especially among younger car buyers.”

The Malibu was Chevrolet’s – and GM’s – best-selling car in the United States in 2010, with sales of nearly 200,000 vehicles. It is among Chevrolet’s most-decorated vehicles in the United States, earning more than 40 industry awards since 2008. The Malibu was the only midsize car in the industry to win the Consumers Digest Automotive “Best Buy” award the last three years – 2011, 2010 and 2009. The Malibu has also been named a “Top Safety Pick” by the Insurance Institute for Highway Safety the last two years.

With the new Malibu, Chevrolet continues to position itself for worldwide growth. GM’s largest brand is in the midst of introducing a global family of fuel-efficient cars including the Cruze, Volt, Sonic/Aveo, Spark and Malibu. These new cars compete in the four largest vehicle segments in the world, which accounted for 54 percent of all non-luxury sales in 2010. The global segment that Malibu will compete in represented 9 percent – more than 5.7 million vehicles – of global sales in 2010.

Last year, Chevrolet sold 4.26 million vehicles globally, or an average of one vehicle every 7.4 seconds. Eight of the top 10–selling markets for Chevrolet in 2010 were emerging markets – Brazil, China, Uzbekistan, Mexico, Russia, India, Argentina and Colombia. Emerging Markets are expected to account for more than 50 percent of Chevrolet global sales by 2012.

More than 600,000 Malibu cars have been sold globally since 2008, when it was named the North American Car of the Year. The 2013 Malibu represents the eighth generation of the nameplate, which was introduced in 1964.