After a few years of turmoil and layoffs amongst its ranks, the UAW is looking to secure more jobs for its members in the long-run.  To that end, it will consider an expansion of lower, tier-two wages for hourly workers at some GM facilities.

“We will look at anything when it comes to negotiations that will retain jobs,” union VP Joe Ashton said, speaking to reporters at GM’s Orion Assembly plant.

The union previously agreed to lower wages for 40% of returning workers in exchange for GM bringing small car production back to the US, and specifically to Orion.  Currently, the deal is specific to Orion, where GM will start production on the Buick Verano compact, and Chevrolet Sonic subcompact.

GM is set to recall its remaining 1,200 laid-off employees by September, and will begin hiring new workers immediately, though it is unclear how many workers will be added.  For this round of negotiations, the UAW will seek to reopen idled plants in Spring Hill, Tn., and Janesville, Wi., and stop the closing of the Shreveport, La. factory, as well as secure more jobs. 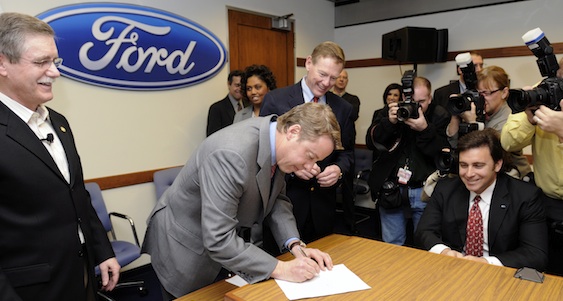