BMW has had a long time history working in conjunction with the MotoGP. And to ensure the safety of the track and the race itself, BMW will be providing a new official Safety Car as well as other fleet automobiles for use by the Dorna Sports management team and IRTA officials.

Starting March 19th, the BMW 1-Series M Coupe will be launched for the first time ever as the official Safety Car, about one month ahead of its already late April launch.

It’s a one-off model built specifically for the race series and is equipped with BMW’s traditional straight-six that’s given two turbos for a grand total output of about 340hp, which is the same engine for the production model.

Click here for more news on the BMW 1-Series M.

The Safety Car is also equipped with a carbon-fiber reinforced hood with large air vents as well as polycarbonate side and rear windows to save weight. A bespoke titanium race exhaust was also equipped to save weight and to tingle the insides of spectators as it flies by. Other body modifications include a new lip spoiler to increase downforce and a new front fascia to help channel air to the rear splitter.

The suspension also has been tuned for a race-track setup with fully adjustable dampers front and rear with adjustable height and camber. Brakes are upgraded to six-piston calipers.

Inside, the 1-Series M Coupe is given a roll cage, a rear seat delete, two racing buckets with 6-point harnesses, a fire extinguisher and Alcantara.

Munich. The motorcycle road racing world championship – or MotoGP – ranks among the world’s most popular and spectacular sporting events. The involvement of BMW M GmbH in motorcycle racing’s top-echelon event now enters its 13th year. To ensure the safety of the practice runs and the race itself, BMW M GmbH is providing the official Safety Car along with a raft of other high-performance vehicles for use by the Dorna Sports management team and IRTA officials.

At the curtain raiser on 19th March, the BMW 1 Series M Coupe will for the first time be deployed as the official Safety Car for the MotoGP events – in advance of its market launch late in April. The BMW Safety Car is a one-off built by BMW M GmbH specifically for this race series. Only the 250 kW/340 hp straight-six M TwinPower Turbo engine and the entire drivetrain were taken over unchanged from the production model.

In the interests of weight optimisation, the BMW Safety Car comes with a carbon fibre-reinforced bonnet featuring additional large air vents, as well as polycarbonate side and rear windows. A special lightweight titanium race exhaust system not only saves weight but also delivers a captivating sound for the benefit of the spectators. Complementing the discreet spoiler lip on the boot lid there is now an adjustable rear wing to provide the requisite downforce. On the Safety Car the aerodynamically honed front apron with its precisely defined air ducting, including Air Curtains, features an additional splitter integrated on the underside of the apron.

The interior of the BMW Safety Car is a model of uncompromising purism. A rollover cage bolted behind the B-pillar, the absence of rear seats, two racing bucket seats with 6-point safety belts, an M steering wheel in alcantara and a fire extinguisher are all standard in the Safety Car.

The suspension technology of the BMW 1 Series M Coupe was specially adapted for the Safety Car. Its high-performance suspension system boasts an adjustable race track set-up that includes a sports-tuned chassis in which the dampers are independently adjustable for bump and rebound. The BMW Safety Car runs on 19-inch mixed tyres measuring 255/35 at the front and 285/30 at the rear. Vehicle height is variably selectable and the camber of the front and rear axle can be altered to suit the circuit topography. The braking system of the BMW 1 Series M Coupe, already designed for extremely high demands, is replaced in the Safety Car with a six-piston fixed-calliper racing brake system.

The deployment of the brand-new BMW 1 Series M Coupe Safety Car marks the continuation of BMW M GmbH’s successful partnership – begun in 1999 – with Dorna Sports, the organisers of the MotoGP World Championship. With a fleet of eight vehicles, BMW is supporting the safe running of the motorcycle world championship in the current race season. As well as the official BMW 1 Series M Coupe Safety Car, this year sees two further reserve Safety Cars from BMW M GmbH present at the track: a BMW X6 M and a BMW M3. In addition, the organising team has been given a BMW X5 M for the Safety Officer and a BMW ActiveHybrid X6 for the stewards. On call this season as a Medical Car is a BMW 535i Touring. There will also be two Safety Bikes contributing to the safe running of race weekends: a BMW S 1000 RR and a BMW HP2 Sport. The ceremonial handover of the vehicles took place at BMW M in Garching-Hochbrück on 28th February 2011. It was on this occasion that Dr Kay Segler, Director of BMW M GmbH, and Carmelo Ezpeleta, CEO Dorna Sports, made an advance announcement that the successful partnership would be extended until 2016, before sealing the agreement in a signing ceremony. 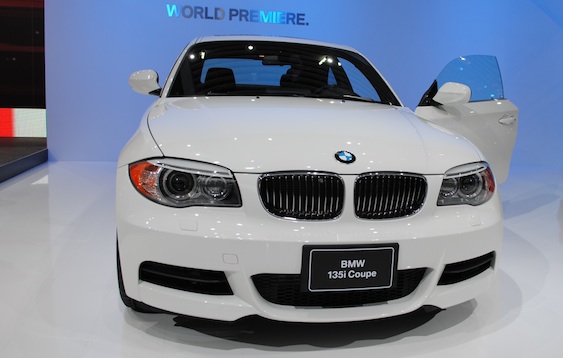