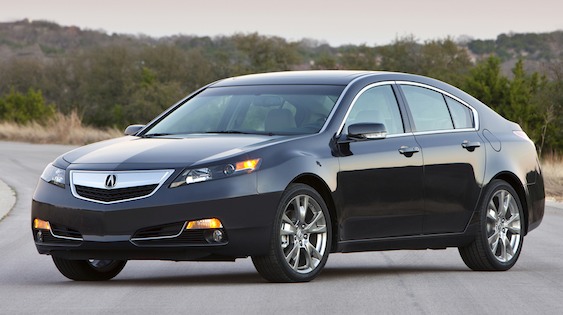 While the entry-level price is $300 more than the outgoing model, the 2012 Acura TL features a range of improvements.

The 2012 TL’s refined new look includes a redesigned front bumper with improved aerodynamics, a revised grille, updated headlights and turn signals, a new fog light design and a shorter front overhang. At the rear, a new rear bumper incorporates a significantly repositioned license plate opening and smaller rear reflectors, while updated taillights and a thinner rear trunk edge trim add to a sophisticated new look. For 2012, all TL models now receive body colored door handles and rear window trim. “With the 2009 TL, the exterior design was a lot about passion,” said Damon Schell, Senior Designer, Acura Design Studio. “With the 2012 TL, we pushed for an increased level of sophistication.”

The transmission teams with a new multi-clutch torque converter that not only reduces heat build-up during operation, but also allows for lock-up activation during a much wider range of driving conditions— which helps generate improved fuel economy. As a result, city/highway fuel economy for the TL is now 20/29 mpg*— an increase of 3 mpg in highway driving over the 2011 model. The TL SH-AWD® equipped with the new 6-speed automatic transmission increases by 1 mpg in both city and highway fuel economy to 18/26 mpg. Matched with the transmission is a new final drive gear ratio that allows for more relaxed cruising on the highway.

To further improve operating efficiency, the TL’s 3.5L V-6 engine receives a host of friction-reduction technologies including a new plateau-honing technique for the cylinders, piston skirts with a new molybdenum coating, redesigned ion-plated piston rings and lower viscosity engine oil. In addition, both the 3.5L and 3.7L engines make use of a revised inlet system that provides cooler air to feed the engine.

Interior
In keeping with its mission as a driver’s car, the TL interior features a “dual personal” design that provides both the driver and front passenger with their own personal space. Inside, the 2012 TL benefits from an even further refined cabin that includes instrument cluster changes, new surface finishes for many interior appointments and available ventilated front seats. Technology improvements abound with refinement of Bluetooth® Audio (now with artists name, song title, etc.), new “active pairing” functionality for Bluetooth® enabled cellular telephones, Dial-By-Number and dial-by-voice tags, and much faster connection speed for the USB port.

Both the TL and TL SH-AWD® models offer an available Technology Package which includes the Acura Navigation System with Voice Recognition™, AcuraLink Real-Time Traffic with Traffic Rerouting™, AcuraLink Real-Time Weather™ and an Acura/ELS Surround® 440-watt Premium Audio System. For 2012, the hard disk drive (HDD) based navigation system increases in size to 60 gigabytes, map coverage is more expansive, and the full VGA monitor is brighter with even richer colors with the new backlit LED display. With the revised HDD system, there is an increase to 15 GB of dedicated space for the storage of up to 3,500 songs**. Also new is Song By Voice™ that allows the driver to choose music by artist, album, song title, genre, playlist and even composer.

New for 2012 is an available Advance Package that incorporates all-new ventilated front seats, larger wheels and a new blind spot information (BSI) system that alerts the driver when another vehicle is detected behind the driver in an adjacent lane.

For 2012, the use of new body sealing techniques including improved weatherstripping design, and additional expanding foam pillar separators , help reduce high frequency noise by 3 dB within the TL’s interior.

Safety
The 2012 TL uses a host of advanced safety features including Acura’s acclaimed Advanced Compatibility Engineering™ (ACE™) body structure. The ACE™ body design enhances occupant protection and crash compatibility in frontal crashes by utilizing a network of connected structural elements to distribute crash energy more evenly throughout the front of the vehicle. ACE™ body design also helps to reduce the forces transferred to the passenger compartment and can help to more evenly disperse the forces transferred to other vehicles in a crash.

Additional passive safety features include 3-point seatbelts for all seating positions, driver and front passenger seatbelt load-limiters with an automatic tensioning system and a Lower Anchors and Tethers for CHildren (LATCH) system that permits quick, convenient attachment of up to two child seats at the outboard locations of the rear seating area.

*Based on 2012 EPA mileage estimates. Use for comparison purposes only. Do not compare to models before 2008. Your actual mileage will vary depending on how you drive and maintain your vehicle.

**Approximate capacity based on an average size of 4.0 MB per song at a 128kbps bitrate

August 19, 2011 Omar Rana Comments Off on Video: Watch the 2013 Lexus GS 350 be unveiled along with some driving footage