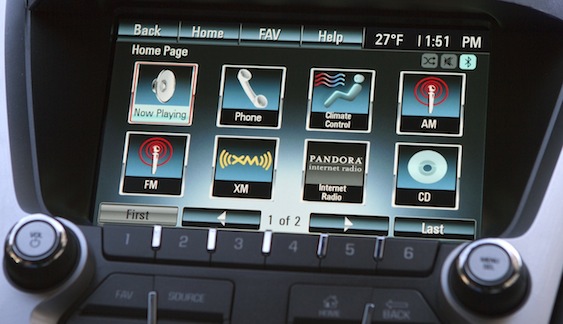 General Motors has finally come up with something that will compete with the Ford SYNC and Toyota Entune. Known as the Chevrolet MyLink, the system provides a “higher level of in-vehicle wireless connectivity and customized infotainment options, plus the unmatched safety and security of OnStar.”

“There is a new generation of car buyers who don’t want to settle for mass market radio,” said Rick Scheidt, vice president of Chevrolet Marketing. “They want to create their own individual stations and have access to them wherever they are. Chevrolet vehicles have offered customers the ability to use portable media devices since 2006 and the introduction of MyLink takes media personalization to a new level. ”

Chevrolet also said that the MyLink and OnStar services will soon be joined by the Powermat charging system shown earlier this year.

Hit the jump to learn about the benefits of Chevrolet MyLink.

Among the new benefits provided by MyLink:

• Enhanced hands-free voice control system powered by Nuance®, which allows simple voice commands to initiate phone calls and select radio stations or media from portable MP3 players and smartphones. A tap of a button on the steering wheel enables intuitive verbal control of smartphone applications like “play (artist name)” or “call (name of contact)” to keep the driver’s hands on the wheel and eyes on the road.

• Pandora® internet radio allows users to create personalized radio stations based on favorite artists or genres and Stitcher SmartRadio® enables access to thousands of audio programming choices allowing customers to build a personalized listening experience. MyLink integrates control of both of these apps for a driver directed listening experience.

• Gracenote®: identifies the music collection on the driver’s smartphone or MP3 player and presents information such artist name, genres and album cover art on the MyLink screen and enables users to select similar music to the tunes they love. Gracenote also improves the accuracy of MyLink’s voice activation system by allowing users to access music using artist nicknames, such as “The Boss,” “G.N.R,” or “The Fab Four” simply by using MyLink’s touch-screen or steering wheel buttons and voice control interfaces.

• Upgraded USB connectivity: While Chevrolet has offered auxiliary device connectivity since 2006, MyLink adds flash memory capability to its USB device connections. This provides users with the ability to access approved applications that will make their MyLink system even more functional, while assuring that driver’s maintain eyes on the road and hands on the wheel.

Toyota iQ buyers to get free Blackberry with purchase

BlackBerry outage made roads safer in Abu Dhabi and Dubai

October 21, 2011 Omar Rana Comments Off on BlackBerry outage made roads safer in Abu Dhabi and Dubai