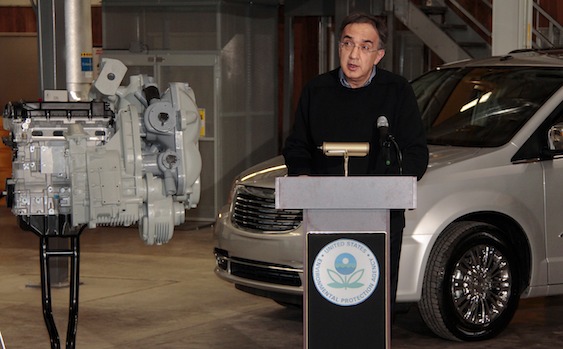 Chrysler Group LLC and the Environmental Protection Agency (EPA) announced today that they will be teaming up to study the possibility of adapting a hydraulic hybrid system for large passenger cars (mainly minivans) and light-duty vehicles.

“In this hydraulic hybrid project, the Chrysler Group and EPA will evaluate and, hopefully, validate fuel-efficiency gains and greenhouse gas reductions,” said Sergio Marchionne, Chrysler Group CEO. “One of the aims of Chrysler Group’s integration efforts will be to meet driver expectations for smooth and quiet operation, so that Americans will want to buy and will enjoy driving vehicles with this technology.”

The first prototype vehicle is expected to hit roads in 2012.

The announcement was made at the EPA laboratories in Ann Arbor, Mich., following a meeting with Sergio Marchionne, Chrysler Group CEO, and Lisa P. Jackson, Agency Administrator for the EPA.

“In addition to creating the jobs of the future, clean energy benefits the U.S. economy by ultimately making energy costs more affordable for consumers – especially if their dollars stay in America,” Marchionne said. “Hydraulic hybrid vehicle technology is one more promising path worth pursuing in the effort to reduce our carbon footprint, and we are excited to partner with the EPA to push forward on this track.”

“Hydraulic hybrid vehicles represent the cutting edge of fuel-efficiency technology and are one of many approaches we’re taking to save money for drivers, clean up the air we breathe and cut the greenhouse gases that jeopardize our health and prosperity,” said EPA Administrator Lisa P. Jackson. “The EPA and Chrysler are working together to explore the possibilities for making this technology affordable and accessible to drivers everywhere. This partnership is further proof that we can preserve our climate, protect our health and strengthen our economy all at the same time.”

The hydraulic hybrid system, developed by the EPA’s lab in Ann Arbor, is well known and currently used in industrial applications, including large delivery trucks and refuse trucks across the country. The technology has shown substantial increases in fuel economy when compared with traditional powertrains in the same type of vehicles. Working together, both parties hope to reduce the size and complexity of the hybrid system and produce a technology that is sensitive to the needs of drivers for smooth and quiet operation.

The research project will focus on adapting the hydraulic hybrid system to a Chrysler Town & Country minivan equipped with a 2.4-liter, inline four-cylinder gasoline engine. Components of the hydraulic hybrid system include a 117 cc engine pump, a 45 cc drive electric motor and a two-speed automatic transmission. Fluid for the system will be stored in a 14.4-gallon high pressure accumulator.

The Chrysler Group has actively adopted fuel-saving technologies including cylinder deactivation on V-8 engines, a new MultiAir system that is being introduced on the Fiat 500 today and will introduce an eight-speed transmission in the 2011 Chrysler 300 that will be introduced later this year. Chrysler Group also will introduce 150 Ram 1500 trucks with a plug-in hybrid system in the coming months as part of a project with the U. S. Department of Transportation.