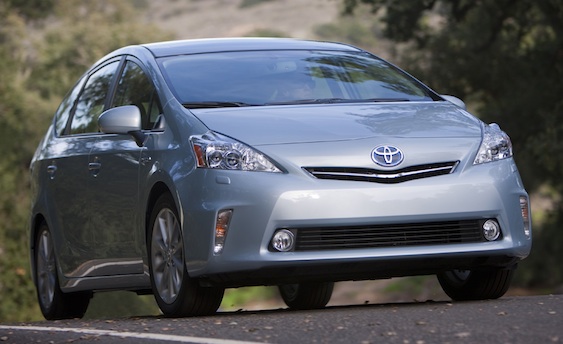 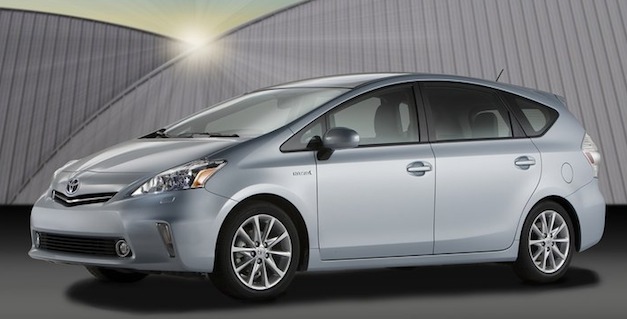 Toyota president and CEO Akio Toyoda and Toyota Division Group Vice President and General Manager Bob Carter both unveiled the full prospective Prius Family today at the Detroit Auto Show. Seeing as how important the Prius is in leading the automobile industry in terms of hybrid powertrains as well as newly introduced fully-electric powertrains, Toyota Motor Corp only teased the public and withheld any major details regarding the new line of Prius vehicles too keep anticipation up.

Besides the already current Prius “Liftback” that has been with us for almost a decade, Toyota introduced three additional Prius models. The first was a Prius plug-in electric vehicle, which will obviously compete with the likes of the Chevrolet Volt and the Nissan LEAF. The Prius plug-in can be driven approximately 13 miles on battery power at speeds up to 60 mph and will take only three hours to fully charge on a 110 volt outlet, and only 1.7 hours on 220 volts. Once the battery is depleted, unlike other EVs where it will just leave you for dead, the Prius plug-in will revert to a standard hybrid powertrain, the same found on the normal Prius.

Second was the Prius-V, which stands for “versatility.” It’s an all-new MPV/minivan that uses the same power and drivetrain as the current Prius, offering the space to haul up to five people, with far more practicality offering 60% more cargo space than the standard Prius, and the highest fuel economy for any car of its kind (42 mpg city/38 highway/40 combined). It will be available in the summer of 2011.

And lastly was the Prius-C Concept, which stands for “city.” The C is considered a “city car” (Honda Fit Hybrid etc.) and although is currently a concept, Carter announced that it will be available by the summer of 2012 and will offer the highest fuel economy of any hybrid.

Hit the jump for the high-res galleries and the press release.

* Prius v fits the lifestyle of young, active families
* Prius c Concept an inspiration for future small, entry hybrid
* Plug-in to arrive in the first half of 2012

With the expansion of the Prius family, a new evolution of vehicles will further increase the acceptance of hybrids with Prius’ same core values of high fuel economy, low emissions, proven technology and environmental stewardship.

“This is no ordinary family. It’s a modern family with a Prius for everyone,” said Bob Carter, Toyota Division group vice president and general manager. “The Prius v is an all-new dedicated hybrid vehicle, and all future Prius family members will be as well. They will all share common Prius attributes but will be unique, with a special appeal to different buyers.”

The Prius midsize liftback has accounted for more than 955,000 sales in the U.S. since it was introduced in 2000. The third-generation Prius, which reached dealerships in June 2009, has continued the hybrid’s heritage of exceptional fuel economy and low emissions, while becoming the third-best selling Toyota passenger car in the U.S.

Prius v: “Versatility” for Young, Active Families
The new Prius v, with “v” expressing the vehicle’s versatility, will meet the needs of growing families with active lifestyles while providing the same attributes traditionally found in the Prius DNA. It will share the current generation Prius’ platform and Hybrid Synergy Drive technology. Featuring a compact exterior yet spacious interior, the Prius v will feature over 50-percent more interior cargo space than the current Prius.

With a balance between outstanding spaciousness, refined style, and smooth aerodynamics, Prius v has a low 0.29 coefficient of drag, which does not inhibit the vehicle’s convenient packaging. It is a new vehicle designed from the ground up, with a shape that evolved from Prius rather than being an elongated version.

The exterior styling is sleek, rounded and bold, with an extended roofline that allows the vehicle to retain the triangular silhouette symbolic of Prius. The trapezoidal-shaped front features sharp-edged headlamps, wind-slipping aero corners for improved aerodynamics and an enlarged under grille, which all help create a unique design evolving from the current Prius. Prius v’s rear styling is highlighted by a refined backdoor panel, intricate combination taillights and a specially designed roof spoiler that improves air flow.

Inside, the Prius v emphasizes overall proportion with spaciousness and flexibility for active families. Comfortable interior space and good visibility has been assisted by a high seating position, ample head room, and an impressive 38-inch couple distance, providing generous rear legroom. A low, wide-opening rear hatch reveals 34.3 cubic feet of cargo space behind the rear seats, making it the most spacious dedicated hybrid vehicle on the market and better than some compact SUVs.

Also available, and a Toyota-first, is a resin Panoramic View moonroof with power retractable sun shades that provides an open atmosphere in the cabin with a 40-percent reduction in weight as compared to conventional glass roofs of the same size, and excellent heat insulation performance.

Despite the spaciousness of a family friendly midsize vehicle, the Prius v will deliver estimated EPA fuel economy ratings of 42 mpg city, 38 mpg highway and 40 mpg combined, the best fuel economy ratings of any SUV, crossover, or wagon on the market. It will also emit 66-percent fewer smog-forming emissions than the average new vehicle.

Like the current generation Prius, the Prius v is a showcase of technology that will include many of the same standard features. Four driving modes (Normal, Power, Eco and EV) satisfy a variety of road conditions and driver preferences. A Smart Key System with Push Button Start, an electronic shift lever, Hill Start Assist Control (HAC), and a back-up camera are standard. Available options include energy-efficient LED headlamps, Dynamic Radar Cruise Control with a Pre-Collision System (PCS), and Advanced Parking Guidance System.

For a high level of safety, there are seven airbags, a high-strength cabin and an energy-absorbing body structure with impact beams, cross members and leg absorption pads. New driver and front-passenger seat design helps lessen possible whiplash injury during a collision.

Prius v will be one of the first Toyotas with the Entune™ multimedia system. For the first time ever in an automobile, this innovative new system leverages the mobile phone to provide a richer in-vehicle experience with fully integrated and wireless upgradeable navigation, entertainment and information services.

Toyota Entune debuts the first-ever support for engaging mobile apps, such as Bing, OpenTable, and movietickets.com, along with accessing useful travel-related services, such as live weather, traffic, fuel information (location and price), stocks, news and sports.

Toyota Entune brings the largest selection of music options available to a vehicle, including iheartradio’s 750+ stations, Pandora’s personalized music, the driver’s personal songs from portable media players and iPods (via USB or Bluetooth audio streaming), and more than 170 stations from XM satellite radio.

Entune will also allow for audio read-back and replay capabilities for text messages, with the ability to respond by pre-set “Quick Reply Messages.”

A new evolution in hybrid vehicles with excellent cargo space and Prius’ heritage of environmental performance and fuel economy, the 2012 Prius v will go on sale in late summer 2011.

Prius c Concept: Small “city”-centric Hybrid Vehicle
While the current Prius has ushered hybrid technology into the mainstream, and the Prius v will provide the additional room and versatility for active families, compact shoppers are interested in a smaller hybrid at an entry price point and with superior fuel economy. The Prius c Concept, with c representing a “city”-centric vehicle, will appeal to young singles and couples who want an eco-sensitive, high-mileage, fun-to-drive Prius.

This dynamic vehicle with urban appeal will pursue outstanding fuel efficiency in a compact package, while also providing a surprisingly spacious interior. It will include many advanced technology features, including some offered on the current Prius.

Prius c Concept is the inspiration for an additional Prius family member that will come to market in the first half of 2012 as the most value-oriented hybrid in the U.S. market with the highest mileage of any “cordless” hybrid.

Prius Plug-In Vehicle: the Best of Both Worlds
Since its initial launch 10 years ago, one of the Prius’ main efficiencies has been a hybrid system with its own on-board recharging system that never needed to be plugged in to take people where they wanted to go. With the addition of new technology and shifts in the market, the Prius Plug-in Hybrid is the family member that represents the best of both worlds – the superior fuel economy of the Prius with added EV driving capability.

Depending on driving conditions, Prius Plug-in can be driven approximately 13 miles on battery power at speeds up to 60 mph. Its compact Lithium-ion battery provides less weight and a quicker recharging time, taking three hours on 110 volts and 1.7 hours on 220 volts. It can be “topped off” anytime with a convenient short charge.

After the EV power is depleted, the Plug-in performs like an economical third-generation Prius, the most fuel efficient midsize hybrid vehicle in America. Unlike pure EVs, it will be a seamless transition for consumers, with the only difference from a regular Prius is that it can be plugged in at convenient intervals.

Currently, more than 150 Lithium-ion-battery powered Prius Plug-ins are part of a demonstration program in several U.S. cities. The program’s goal is to demonstrate plug-in technology, educate and inform the public, evaluate performance, and better understand the benefits to future customers. This will help pave the way for an on-sale target in the first half of 2012.

When it comes to market, the Prius Plug-in will represent the most eco-sensitive and advanced choice within the Prius brand of products. 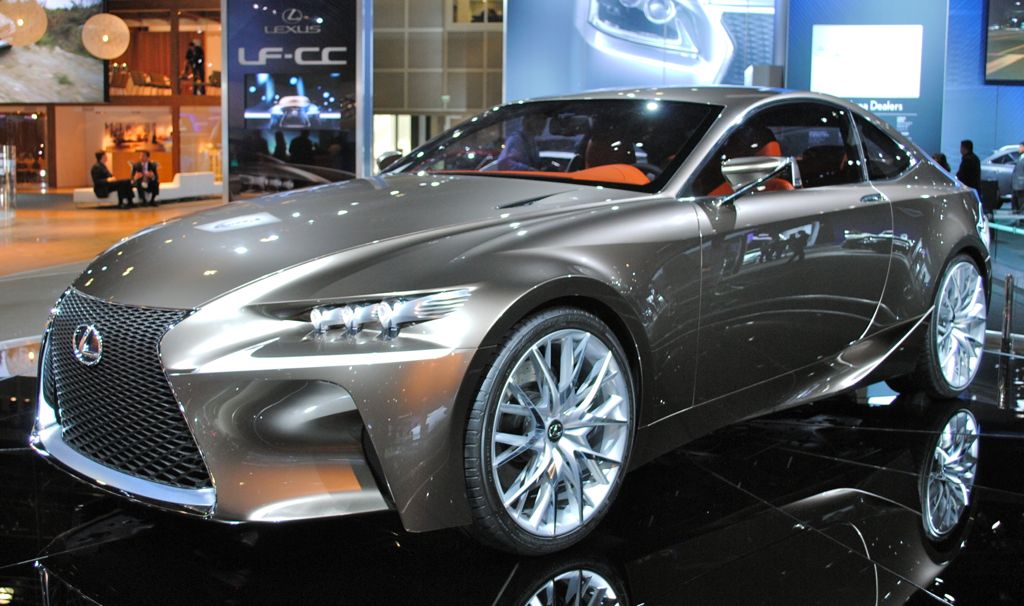 2009 Frankfurt: Mini Coupe and Roadster Concept are the Oxford Twins

September 15, 2009 Omar Rana Comments Off on 2009 Frankfurt: Mini Coupe and Roadster Concept are the Oxford Twins

Toyota and Lexus hybrid vehicles sales top one million in the U.S.