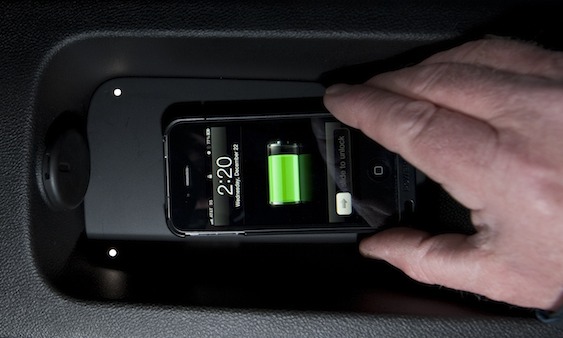 General Motors is making some huge headlines at the 2011 Consumer Electronics Show this year. The company’s OnStar divison has already made some big announcements and today GM and Powermat announced that they will bring wireless charging technology to the Detroit automaker’s future lineup of Chevrolet, Buick, GMC and Cadillac vehicles starting mid-2012.

What is Powermat? If you’ve recently visited your local Best Buy, you’ve probably seen the Powermat product in the ‘Mobile’ section. The product allows you to place your cell phone and other mobile technology on a mat and charge them without having to plug them into the wall.

Well, GM decided to bring that technology to the car. Basically, instead of plugging into the cigarette lighter, you’ll have a Powermat in the car that will allow you to charge your cell phone while you drive around.

“Imagine a mat or shelf where you could put your iPhone, your Droid or other personal device and charge it automatically while you commute to work, run errands or as you’re driving on a family vacation,” said Micky Bly, GM’s lead electronics executive, including infotainment, hybrids and battery electric vehicles. “The Chevy Volt will be one of the first applications, but we intend to expand it across our vehicle portfolio,” Bly said.

As a part of the partnership, GM Ventures is investing $5 million in Powermat to accelerate the technology’s development and support the company’s efforts to grow globally.

Automaker Invests in Start-Up to Do Away With Charging Cords

LAS VEGAS – General Motors and Powermat, a pioneer in wireless charging technology, announced a commercial agreement today that will eliminate the need for charging cords for personal electronic devices in many future Chevrolet, Buick, GMC and Cadillac products beginning mid-2012.

The Chevrolet Volt, conceived as a reinvention of the automobile that would help reduce America’s dependence on oil, while providing the assurance of an extended driving range, will be one of the first GM vehicles to offer this technology. The technology is expected to revolutionize how electronic devices are charged in a car.

Powermat, a private firm, was founded in 2007 and offers wireless charging products for the home in a number of retail stores, including Best Buy, Target and Wal-Mart.

Poliakine is excited to start with the Chevrolet Volt, which has swept major Car of the Year awards to date.

“GM is among the rarest of giants in today’s business climate: a forward-thinking innovator with the courage and good sense to care about the well-being of the consumer and the well-being of our planet,” Poliakine said.

Jon Lauckner, who helped create the Volt concept and now is President of GM Ventures, has been dreaming about a technology like Powermat for years.

“We first developed the Volt concept car in 2006,” Lauckner said. “The intent was to revolutionize every aspect of the car, not just the propulsion system. We had something like this in mind even then, and we think it will have widespread appeal.”