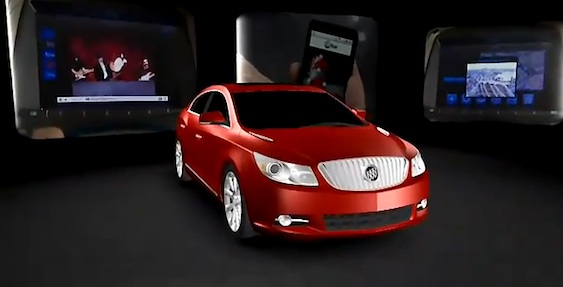 At the 2011 International Consumer Electronics Show (CES), Verizon is showing off the consumer and enterprise capabilities of its new 4G LTE network with the products, services and solutions that take advantage of the fast speed and low latency of the new wireless network.

OnStar teamed up with Verizon to share some of the spotlight by unveiling a demo app for what future in-vehicle entertainment, communications and safety could look like with the Verizon Wireless’ 4G LTE Mobile Broadband network.

OnStar is displaying a concept Buick LaCrosse that shows applications that combine the power of OnStar and 4G speed.

What can you do with OnStar and Verizon’s 4G? Well, you could watch the short demo video after the jump but OnStar says that the future combination can allow drivers to take advantage of vehicle monitoring, impact detection, voice portal, video chat and traffic view.

How soon will this make it to your car? No word on that yet.

Check out the short demo video and the press release after the jump.

OnStar has equipped a stationary Buick LaCrosse research vehicle to show these applications in the Verizon Wireless booth. Among the innovative services made possible by combining the power of OnStar with the speed of 4G:

Vehicle monitoring. Cameras mounted throughout the interior and exterior of the car allow remote viewing of what is happening in and around your parked vehicle through a smart phone or PC.

Impact detection. The research vehicle has the ability to send out live video to secure servers in the cloud from each of its six cameras placed around the exterior and interior of the vehicle. This is triggered by events around the car, or by an application on your smart phone. When an impact is detected, such as a parking lot fender-bender, the vehicle transmits a video clip – making it possible to identify offending drivers.

Voice Portal. You can safely connect through voice commands to call up top social web sites such as YouTube, Twitter, Wikipedia and music with Verizon VCAST on the in-vehicle display.

Home monitoring and control. Keep an eye on your home by connecting to security cameras in real time through the 4Home service. Control the thermostat, lights and other home systems from your vehicle – preset scenes allow you to condition your home when you leave, before you return, or when you’re leaving for an extended period of time.

Electronic User’s Guide. Learn how to operate and maintain your vehicle through videos streamed on demand to the in vehicle display.

Traffic view. A voice-operated navigation system goes beyond calculating the best route by displaying live traffic-cam images from TrafficLand to spot congestion before you get stuck in a back-up.

“The true broadband speed of the Verizon Wireless 4G LTE network gives our engineers the freedom to re-imagine the world of connected in-vehicle services of the future,” said OnStar President Chris Preuss. “While we haven’t decided yet which of these demonstration features OnStar will offer, or when, these prototype applications show just some of what’s possible when we combine our 15 years experience in developing safe secure and leading edge connected mobility solutions with the speed and agility of Verizon Wireless’s 4G LTE network. Any new future services OnStar might offer will meet our high standards for safety – making sure that drivers’ hands are on the wheel and their eyes are on the road.”

OnStar’s prototype applications are the result of collaboration with Verizon Wireless’ LTE Innovation Center. The LTE Innovation Center, established in 2008, provides an environment for diverse companies to work together to develop innovative products that leverage 4G LTE technology.

OnStar’s Buick LaCrosse research vehicle will be highlighted from Jan. 6 – 9 in Verizon Wireless’ CES booth (#35216 in the South Hall of the Las Vegas Convention Center).

Hyundai: We’re going after Prius and the Volt with the plug-in in 2012